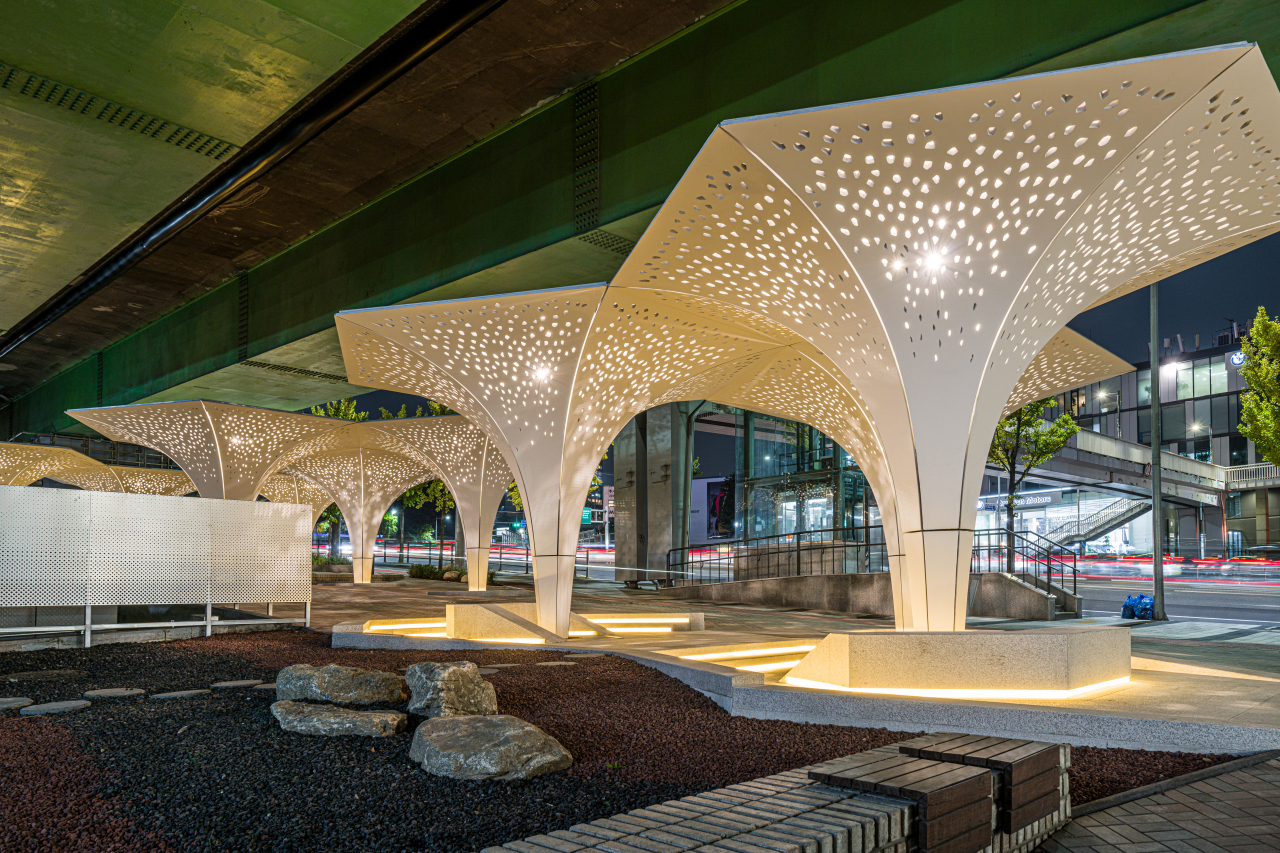 "(Extra)Ordinary Arboretum,” in Yongsan, central Seoul, by Cheon Janghwan, associate professor of architecture at Kyung Hee University (Courtesy of Cheon)
Spaces underneath overpasses are neglected spaces, many of them left shabby and used as illegal parking spots.

In Seoul alone, the total space underneath the nearly 200 highway overpasses is equivalent in area to about 55 percent of Yeouido, or 210 football fields. But only 10 percent of these spaces are used efficiently, according to the Seoul Metropolitan Government.

“Compared to the density of the Seoul population, many public spaces like those underneath overpasses are left wasted,” said Cheon Janghwan, an associate professor of architecture at Kyung Hee University. He designed the space under the overpass that goes over Hannam-daero in Yongsan, central Seoul, which was unveiled to the public in November.

The long-abandoned place has been transformed into an artistic place with installations of white morning glories along with light-emitting diodes that look like stars at night. Under the morning glory installations are seats where people can rest and gather for coffee. A newly established coffee shop, Cafe de Blue, also opened recently in the area.

“I wanted to make people feel as if they were resting in a forest by bringing elements of nature to the space, which has been regarded as an artificial place far removed from nature,” Cheon said.

South Korea began constructing overpasses in the 1970s when the country began its rapid industrialization, without planning how to use the land underneath. Some places are plagued with conflicting interests, which is one of the factors hindering their development or revitalization. 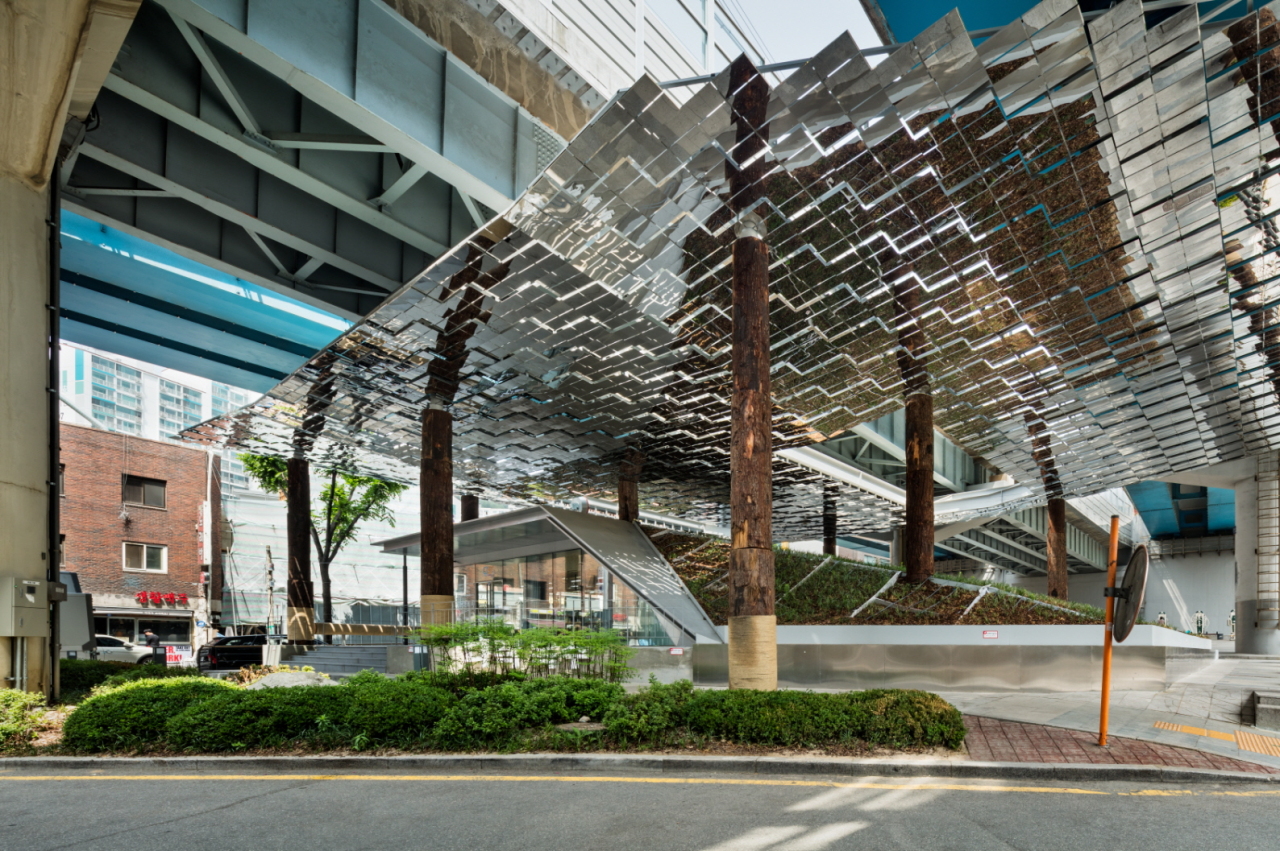 The Darak Oksu, which opened in 2018 beneath the Oksu overpass, is now a community space for cultural activities. Located just outside of Oksu Station, Exit No. 7, it was designed by architect Jo Jin-man, who founded Jo Jinman Architect.

“As the Seoul metropolitan city became increasingly dense and the land consumed by privatization, the space for the public realm diminished,” Jo wrote regarding the project.

The space features a sloped 196-square-meter mirrored roof with a solar concentration system to enable plants to grow. “We incorporated 5,000 mirror plates acting as a ‘roof’ supported by wild wooden pillars,” the architect said. 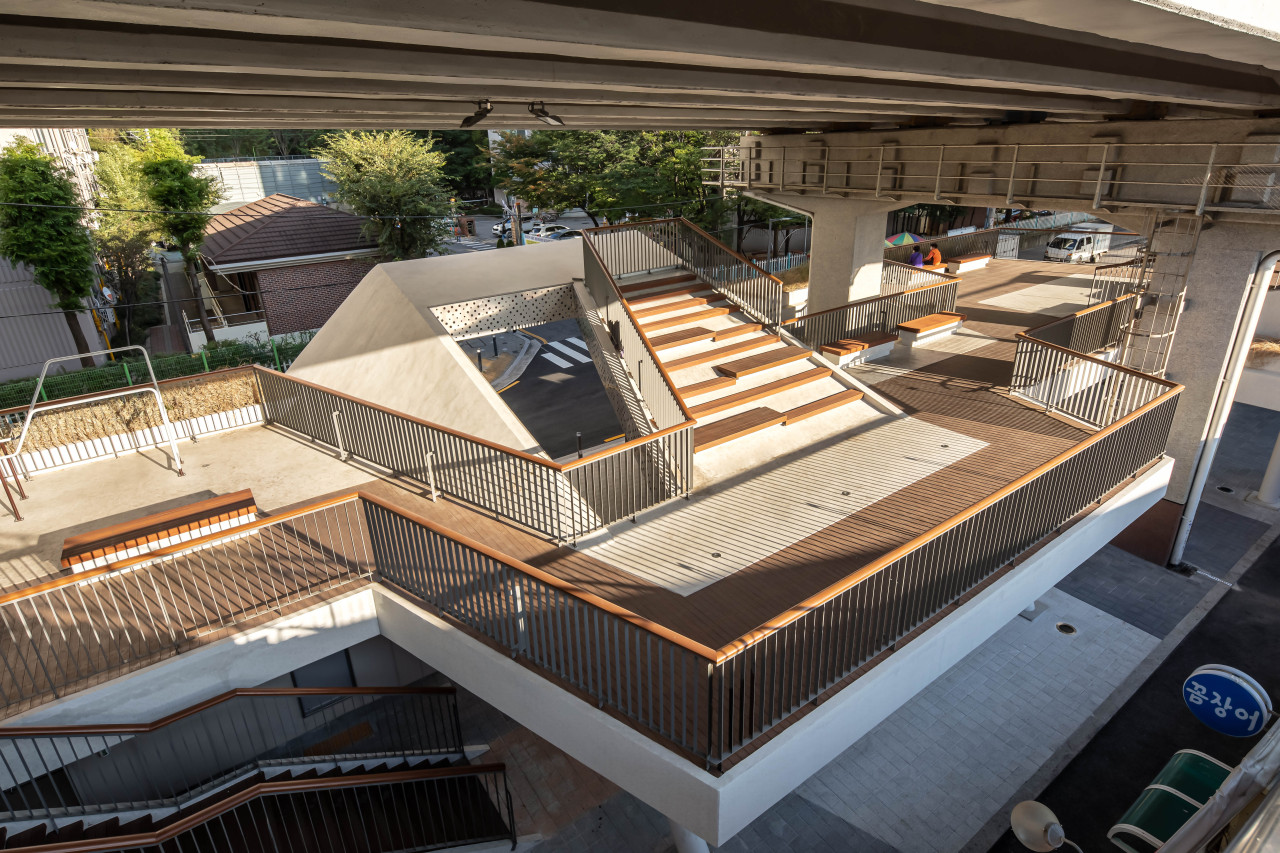 "Roof Square” by HG-Architecture in Dongdaemun-gu, eastern Seoul (Seoul Metropolitan Government)
The move to revitalize overpass areas is spreading to other metropolitan cities, including Busan and Ulsan.

“We are receiving many inquiries from different cities regarding the project to revitalize the spaces under overpasses,” an official from the Seoul Metropolitan Government said. Three more overpass spaces will be transformed within a few years -- in Nowon-gu and Seongbuk-gu, northern Seoul, and in Geumcheon-gu, western Seoul -- according to the city government.