[Richard A. Clarke] Terrorist threat to US still lurks 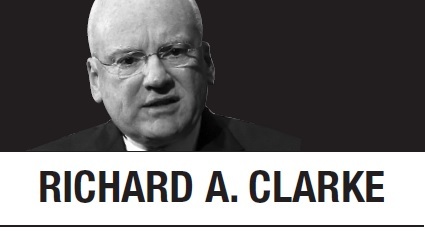 A twisty, narrow way in the cramped heart of Vienna’s oldest quarter, a busy street in an upscale neighborhood of Tehran and remote woods in Nigeria seem unlikely to share a theme or have relevance for the incoming Biden administration.

As Viennese were enjoying their last night out in the little bars of the Innere Stadt on Nov. 2, before another COVID lockdown started, the music and good times were suddenly punctuated by the sharp staccato of gunfire. A young radical Islamist ran through the cobblestoned alleys near the old synagogue, shooting 27 people, four fatally, before being shot dead by police. An Austrian-born son of immigrants, the 21-year-old shooter had previously been in custody for support of ISIS.

Three months earlier, in a comfortable neighborhood north of downtown Tehran, as residents walked along the tree-lined streets after dinner on a summer night, five shots rang out. Two men on a motorcycle sped away from the scene, leaving the driver and the passenger of a Renault bleeding out in the front seat. The killing came on Aug. 7, the anniversary of al-Qaida’s murderous attacks on two US East African embassies in 1998.

The dead man, known to the US as Abu Muhammad al-Masri, had masterminded that 1998 operation and much else of al-Qaida’s deadly activities. At the time of his death, he had become the deputy leader of the terror group and was living undercover in Iran. The New York Times reported that his death was carried out by Israeli intelligence assets at the request of US authorities, who had al-Masri on the FBI Most Wanted List for years.

In between the shootings in Vienna and Tehran, an American living on a farm in Africa, 8 kilometers inside Niger from the Nigerian border, had been kidnapped by six armed men. Four nights later, on Halloween, as the hostage-takers stood about their camp in Nigeria, five of them collapsed, simultaneously falling to the ground dead from silenced rounds shot from the darkness.

US Navy Seals had flown in from Virginia, silently jumped from MC-130 aircraft onto an improvised landing zone, miles from the camp, and walked to their firing positions. The quiet was then broken as US Marines’ Osprey aircraft landed to extract the Seals and the rescued American. US authorities had acted quickly to prevent the hostage from being handed over to an ISIS affiliate group operating in the area.

None of these dramatic events garnered much media coverage in the US, focused as the nation is on the presidential election and public health crisis. If the reporting around each of the three events is accurate, as appears to be the case, together they should serve to remind us of three things.

First, ISIS and even al-Qaida are still extant and plotting further attacks on the West and the US. Moreover, the Tehran government, which has denied both the reports of the al-Qaida leader’s death and also any Iranian role at all in supporting terrorism in the region, appears to have had a hand in supporting the remnants of al-Qaida for years, including providing its leadership safe haven.

The shooting in Tehran also served to remind us of Iran’s continuing hand in terrorism in Iraq. Perhaps not coincidentally, the assassination last August took place in front of the Tehran safe house of an Iraqi terrorist leader. That man, Abu Mahdi Al-Muhandis, was also killed by the US. He was hit along with Iranian Gen. Qassem Soleimani in Baghdad by a US drone strike.

Second, the United States, acting with its partners, is still conducting counterterrorism operations in areas where terrorists might have judged that they were secure and immune from US justice. No other nation in the world could, or would, have been able to rescue one of its citizens 96 hours after being taken, by sending a commando team more than 5,000 kilometers supported by an air armada of specialized aircraft. The hit on al-Masri, coming 22 years to the day after the attacks on our Naibori and Dar es Salam embassies, also indicates yet again that neither Israel nor the United States cease to pursue terrorists who have killed their citizens, no matter how long it takes.

Third, focus as it must on the pandemic and rebuilding America’s standing abroad, the Biden administration cannot afford to think terrorism is a risk of the past. In fetid ISIS refugee camps and detention centers in Iraq and Syria, the next generation of terrorists is being radicalized to seek their revenge.

Radical Islamist terrorism may largely be out of sight for Americans of late. It must not be out of mind.


Richard A. Clarke
Richard A. Clarke was the national coordinator for security and counterterrorism in the Bill Clinton and George W. Bush administrations. He wrote this for the New York Daily News -- Ed.