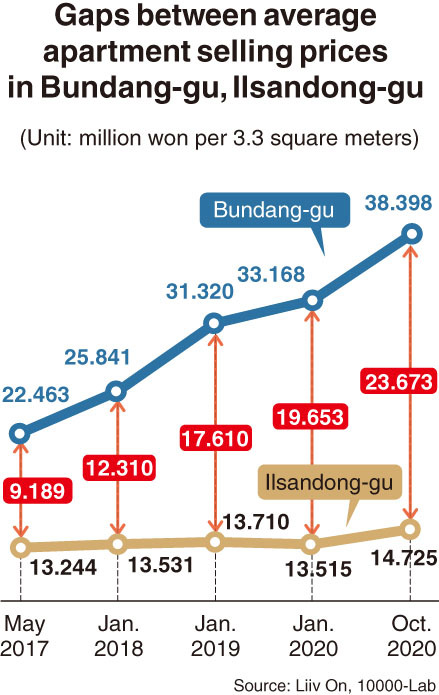 Despite the two towns having been planned and built around the same time in the early 1990s, the price gap between apartments in Bundang and Ilsan is getting wider each year, showed a report by KB Kookmin Bank’s real estate services platform Liiv On and real estate information service 10000-Lab.

Bundang and Ilsan are among the five “new town” projects announced in 1989 by the Roh Tae-woo administration to help with real estate price stabilization and housing supplies. The commuter towns, comprising various apartment complexes, were ready for their first residents by the end of 1992.

Bundang is south of Seoul, while Ilsan sits northwest of the capital city.

10000-Lab said the lower home prices in Ilsan stem from its having remained a “bedroom community” with few corporate jobs. It said Ilsan would need wider infrastructure, such as the GTX train, or would need to attract business headquarters to narrow the price gap.