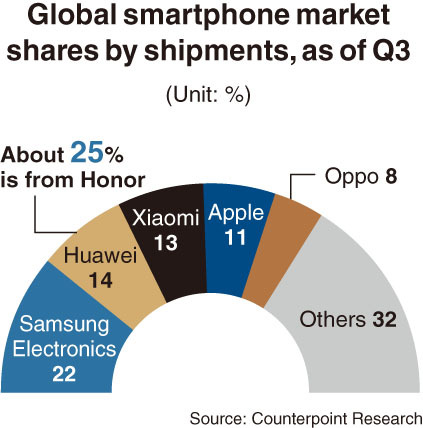 Due to the US sanctions on Huawei, which have cut off the Chinese smartphone maker from chip supplies, the company has decided to sell its mid-range phone brand Honor, according to reports Tuesday.

Considering the current shares of the global smartphone market, Huawei that had claimed a 14 percent share as of the third quarter of 2020 would fall behind its rivals like Samsung Electronics.

Meanwhile, Samsung was the largest phone manufacturer in terms of shipments in the third quarter, taking up 22 percent of the market.

By selling its Honor unit, the competition against Samsung for the No. 1 spot would no longer be relevant, according to market forecasts.