Though Lee was born in Daegu in 1942 as the third son of Lee Byung-chull, founder of Samsung Group, it was perhaps his bold instincts for change and survival that made his father change his mind and bequeath the throne to Lee, bypassing his two older brothers.

During his childhood, Lee was sent to his grandmother and raised by her until he was 3, as his parents were too busy growing the business of Samsung Sanghoe, a small trading company that sold fruit and dried fish. Lee was only able to see his father once or twice a year.

In 1947, Lee finally reunited with the whole family as the business prospered and they moved to Seoul. However, just one year after Lee entered elementary school, the Korean War broke out in 1950, forcing the whole family to leave Seoul and evacuate from one city to the next. Lee changed school five times.

In 1953, Lee was sent to Tokyo to study, as his father told him to “watch and learn from an advanced country.” Living with a Japanese housekeeper and a brother nine years older than him, Lee became an introvert.

“Without any friends to play with, I spent much time thinking alone, very deeply. At the most sensitive age, I felt discrimination against (Korean) people, anger, loneliness and longing for parents so vividly,” Lee had said in an interview in 1989. 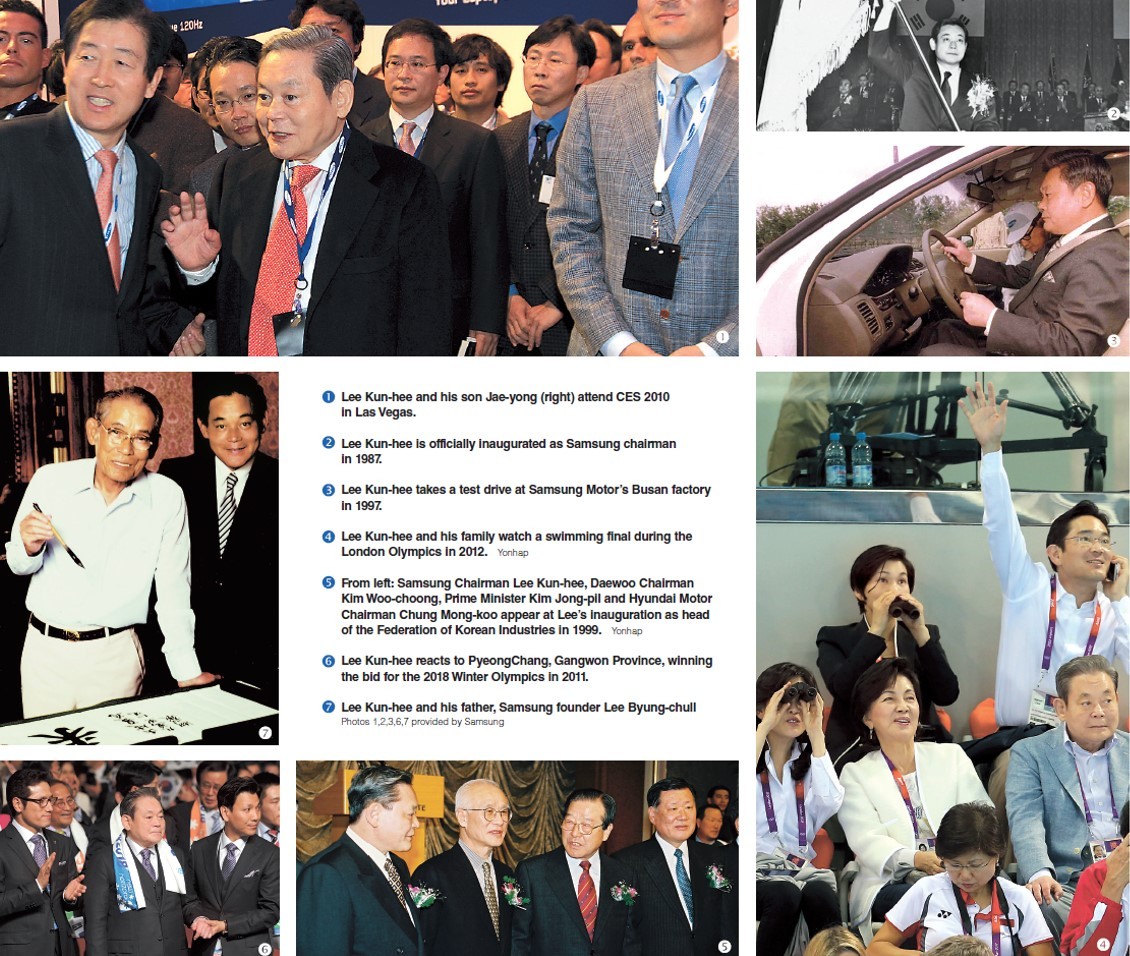 However, it was three years of loneliness in Japan that allowed Lee to study the country and grow his habit of finding answers through deep contemplation, which later became the foundation of his leadership.

When Lee returned to Korea to study at Seoul National University High School, he brought insights with him. Lee, who was shy and quiet in school, often bewildered his friends by saying, “When Korea brings in more loans from the US, it will boost our security as the US will have more interests in Korea,” “Building a factory and creating jobs is more patriotic than any other speech” and “Companies that can’t generate profit are only parasites that live off the country.”

After graduation, Lee returned to Japan to study economics at Waseda University. This time, he could get a glimpse into Japan’s leading electronics and semiconductors industries, spending time taking apart Japanese radios, televisions, videotape recorders, cameras and even cars, and putting them back together.

In 1966, Lee started his career at the group as an executive director at Tong-Yang Broadcasting. He kept a low profile, quietly learning from Hong Jin-ki, his father-in-law and founding chairman of the broadcast station.

Eight years later, Lee made the decision of a lifetime based on his insights and experiences in Japan. In 1974, amid the global oil crisis, Lee acquired a 50 percent stake in the financially troubled Korea Semiconductor for $50,000 with his own money, despite opposition from his father who believed the semiconductor business was too expensive and that Samsung lacked sufficient technology.

Five years after the bold acquisition, Lee was appointed vice chairman of Samsung Group and was acknowledged as the rightful successor of his father. In 1987 after his father passed away, Lee succeeded his father.

Lee’s extraordinary commitment to chips paid off. In 1992, Samsung became a memory chip powerhouse by developing the world’s first 64-megabyte DRAM. Since then, it has never conceded the top spot in the global market. 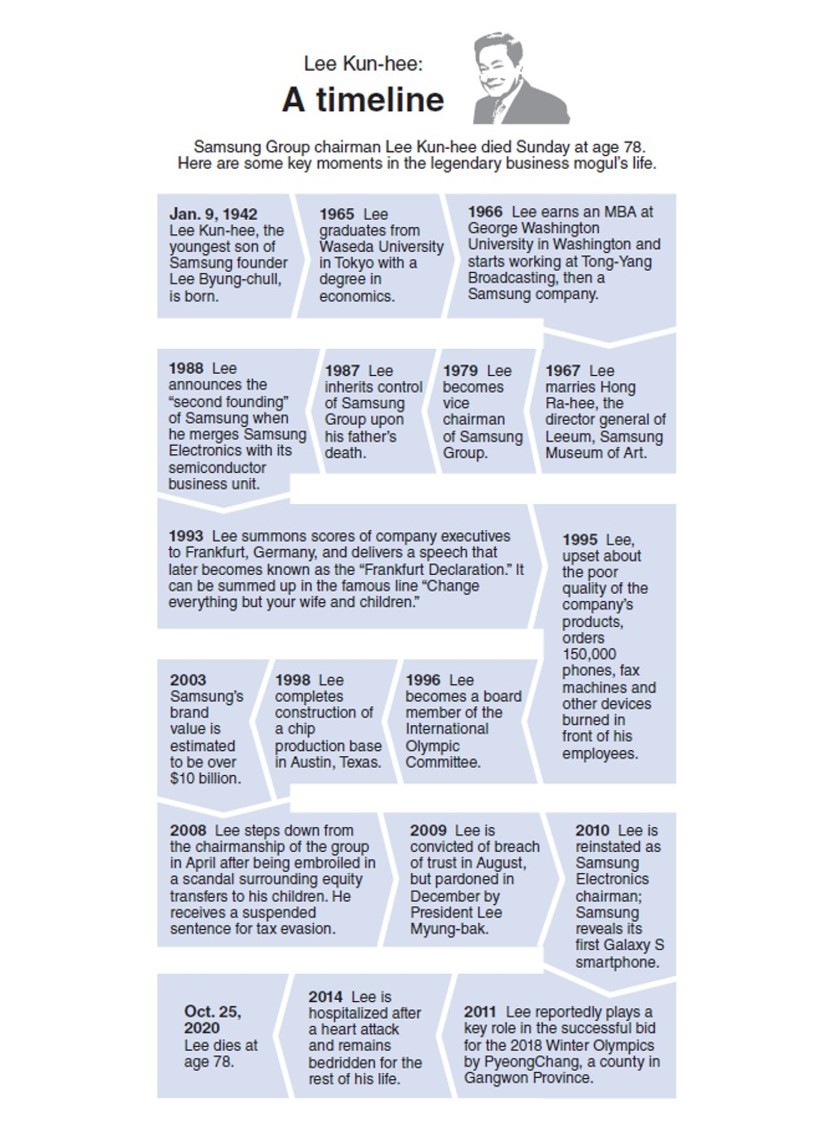 Despite success in semiconductors, Lee’s worries deepened as Samsung was still a regional player in the early 1990s. In 1993, Lee opened a convention in Los Angeles to display Samsung’s products and see Samsung’s standing on the global stage.

To his shock, Samsung’s products were ignored by visitors, as dust settled over the display. In the same year, to seek a revolution Lee brought together 200 executives and employees in a hotel in Frankfurt, Germany and declared the “New Management” doctrine, calling for Samsung to ditch conventional practices, thoughts and rules and seek quality in its products.

“Change everything except your wife and kids,” Lee famously said at the hotel.

In March 1995, after noticing the poor quality of Samsung’s Anycall cellphones, Lee ordered employees to incinerate 150,000 Anycall phones worth 50 billion won ($44.3 million) in front of the factory in Gumi, North Gyeongsang Province.

Beyond handsets, Samsung also stood out as a global tech giant in home appliances. In 2006, 37 years after producing black-and-white TVs in 1969, it overtook Sony to become the No. 1 player in the global TV market.

Thanks to Lee’s business insights and consistent pursuit of quality, Samsung Group’s revenue, which was short of 10 trillion won when Lee became chairman in 1987, had exceeded 386 trillion won as of 2018, with its market capitalization having grown from 1 trillion won to 396 trillion won in the same period.

Lee was also a great contributor to the development of sports in South Korea. He spared no cost in developing sports whether they were popular or unpopular. Samsung currently runs baseball, soccer, basketball, volleyball, table tennis, wrestling, badminton, track and taekwondo teams here.

In addition to being chairman of the Korea Wrestling Federation, Lee served as owner of baseball’s Samsung Lions. As a member of the International Olympic Committee, he played a major role in attracting the 2018 Winter Olympics to PyeongChang, Gangwon Province.

Lee’s pursuits were not always successful, however. His lifelong challenge in the auto business ended in disappointment.

Immediately after taking office, Lee formed a task force on the automobile business, believing cars were the only answer to exceed its rival Hyundai Group in sales.

Lee wrote in an essay, “I have studied the auto industry more than anyone and have met countless people. I have met almost all of the world’s leading carmaker executives and technicians. It was not spontaneously started.”

The construction of Samsung Motors’ Busan plant began in 1995 and a test-drive for the project named KPQ (SM5) was held the same year. Lee rode the SMS525V, Samsung Motors’ top-of-the-line model, at the inauguration ceremony of President Kim Dae-jung in 1998.

However, with the bankruptcy of Kia Motors and the Asian financial crisis, financial authorities here demanded Samsung make a decision. At the time, Samsung was losing about 1.5 million won per each car produced.

Lee ended up leaving Samsung Motors under court receivership and gave 3.5 million of his shares in Samsung Life Insurance to creditors. He also came up with compensation plans for workers and subcontractors. Samsung Motors was acquired by Renault in 2000.