[Serendipity] Magical evening at the palace 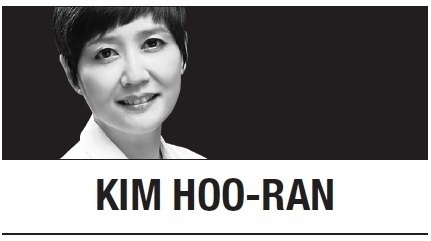 An unseasonal cold snap did little to deter hundreds of people, young and old, from taking in the enchanting view of Gyeongbokgung at night on Wednesday.

The colorful dancheong that decorate the palace buildings seemed to shimmer in the warm glow of the lights and the trees that have weathered numerous changes of seasons, illuminated from below, seemed to come to life.

“This is the first time in my life that I am here at night,” I overheard a woman tell her friend as they kept their eyes on their primary school-age children who ran about excitedly, snapping pictures with their smartphones. “Only a few years ago, Gyeongbokgung’s gates were always closed at night,” she said.

Ever since the Joseon-period palaces in the capital -- there are five of them, all located in downtown Seoul -- began offering nighttime viewings for a limited period each year, they have been a huge crowd pleaser. This year was no exception, the tickets selling out online within the first two minutes.

A night out on the palace grounds was perhaps just what COVID-19-weary Seoulites needed. A chance to be outdoors among people, enjoying the crisp autumn air away from the hustle and bustle of the city that lay just outside the palace gates.

Wednesday night at Gyeongbokgung was made all the more special by a stunning performance at Gyeonghoeru, a pavilion once used for royal banquets. Seated on a floating platform, the audience was treated to a spectacular show on a floating stage, a visual extravagance with a water screen and aerial performance.

Who could have imagined that pansori -- narrative music -- featuring the filial daughter Sim Cheong, who throws herself into the sea in hopes that her blind father will gain back his sight, could be turned into an entertaining show that, by turns, had you in stitches and in tears.

The show, titled “Gyeonghoeru Fantasy: Gungjung Yeonhwa,” is an hourlong extravaganza performed daily through this Saturday as part of the Royal Culture Festival. The show will also be streamed live on YouTube on Friday and Saturday and a video of the performance will be available Oct. 26-31, also on YouTube.

What a difference from my school days, when the routine spring or autumn field trips to the palaces were just tiresome activities. We saw the buildings and we did get bits of lessons on history if we cared to pay attention, but most of the day was spent kicking up dirt as we marched in rows, holding hands with our partners lest we get lost. Opening up our lunch boxes was the highlight of the day, sharing what we had brought, while trying to stay safe from the bees that inevitably came buzzing, attracted by the sweet scent of our sodas.

Without any content or storytelling, the palaces were just grand old buildings, a legacy from the past to be looked at. The possibility of “enjoying” the palaces was not even a remote possibility back then, decades ago.

How things have changed! Young people dress up in hanbok to visit palaces, armed with selfie sticks. Programs such as the annual Royal Culture Festival, which was launched in 2015, attract thousands to the palaces, which offer special programs during the festival period. For a limited time, the palace grounds become places of enchantment, of stories yet to be told.

Couldn’t these special events be turned into regular offerings? It seems that the efforts and resources put into creating “Gyeonghoeru Fantasy” warrant regular performances. Of course, the difficulties of staging such spectacular shows at cultural heritage sites with numerous national treasures are many. But perhaps a way could be found so that such shows and events can be shared by a greater number of people. Once people experience the palaces in this way, they will surely have renewed appreciation for the palaces in our midst that so often go unnoticed, because they seem to have been there forever.