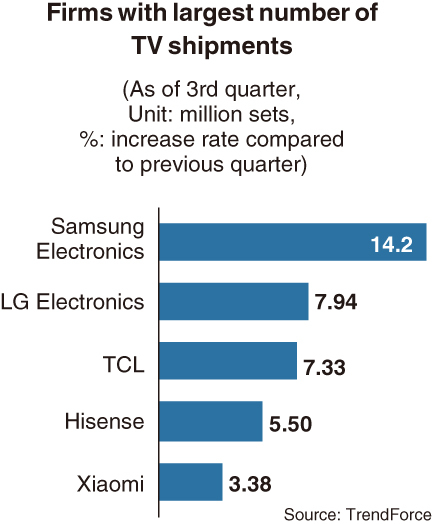 Shipments of television sets worldwide broke records in the third quarter this year with the volume reaching around 62.05 million, according to market watcher TrendForce based in Taiwan.

Topping the list of manufacturers were South Korea’s Samsung Electronics and LG Electronics, with them respectively seeing 81.7 percent and 67.1 percent increases in the shipment compared to the second quarter. Three Chinese firms followed in the list.

TrendForce said the rapid increase in the shipment follows rescheduled deliveries from the first quarter due to the COVID-19 pandemic and the rise in demand for TVs in the North American region, as well as the seasonal peak in TV sales in the third quarter.