By Park Yuna
Published : Oct 10, 2020 - 16:01       Updated : Oct 12, 2020 - 14:59
After spending hours in meetings in the morning for her newly opened exhibition, Yang Hae-gue, a Korea-born installation artist who is one of the most in-demand artists across the globe today -- sat down with The Korea Herald on Monday, skipping lunch due to her tight schedule.

“Please do not worry about me,” Yang said in a voice that sounded as if she could continue hours for the sake of her art. The artist, 49, is holding her fifth solo exhibition in Korea at the National Museum of Modern and Contemporary Art, Korea. The exhibition, “MMCA Hyundai Motor Series 2020: Haegue Yang - O2 & H2O,” showcases the artist’s 40 works, including works created for the show.

In partnership with the Hyundai Motor Company, the state-run museum annually invites an influential Korean artist to hold a solo exhibition. Yang was selected from among 30 candidates recommended by curators for the growing recognition of her work at home and abroad. Although officially described as being based in Germany and Korea, Yang is one of the busiest globe-trotting artists, putting on exhibitions around the world, including a major show at the Museum of Modern Art (MoMA) which opened last fall and runs through Nov. 15.

At the MMCA exhibition, Yang’s endeavor as an artist is well-demonstrated in her new work, “Sonic Clotheshorses,” a laundry drying rack whose frame is enshrouded with bells as though shaping a body. She came up with more than 40 different shapes of racks, and the seventh and eighth shapes are on display at the museum.

“There are more than 10 keyholes through which to interpret the artwork (“Sonic Clotheshorses”) -- you can talk about the bells, a handle or the laundry drying rack itself,” Yang said. “But what I am interested in is the ‘number of cases.’”
Although she has been working with laundry racks since 2006, the concept of number of cases emerged recently. When she first used the household object in 2006 at her first solo exhibition in Korea, it was widely seen as a metaphorical evidence of life set up in an abandoned house in a small town, according to the MMCA.

“There are several aspects about a laundry drying rack in terms of its characteristics, but it is my first time to apply the concept of the number of cases about the laundry drying rack,” Yang said. “I feel like my works deepen over time.”

When asked about the meaning of the concept, she said there is no specific intention. “It’s like a game of whack-a-mole, smashing and eliminating. Maybe I can quit the process at some point, telling myself ‘I am done with it,’” Yang jokingly said.

Of the MMCA exhibition, Yang said she was surprised to hear some describing the show as having a “Korean atmosphere,” a reaction that may stem from the use of materials familiar in Korea tradition. For instance, “Sonic Ropes,” part of the sonic sculpture series, conjures up an image of Korea’s fairy tale about a brother and sister who became the Sun and Moon.

When asked if she intentionally reflected a “Korean vibe” at the exhibition, she said, “No, never.”

Although she usually considers the locality when she produces an exhibition, she never intentionally reflects a “Korean way,” and is critical of how people view things in a way to which they are accustomed.

“For example, I did not express the concept of the yin, yang and the five elements (earth, water, wood, fire and metal) for my works in a Korean way. I just value the concept of the elements, which I consider meaningful for contemporary art. I can apply the concept to any exhibition (around the world) because I can do it,” she said.
Calling herself as a “hybrid artist,” the artist said she was influenced by Korea as well as foreign countries. Born in 1971, Yang went to Germany after graduating Seoul National University, not confining herself to a certain region. Yang is currently a professor of fine arts at the Stadelschule in Frankfurt, her alma mater.

“People think what they have heard and what they know is everything they know,” Yang said, hinting that people lack understanding others outside of their comfort zones or cultures.

While straws were used to build houses and had numerous domestic applications in Korea of long ago and bells are used by mudang, or Korean shamans, those materials were also widely used in other countries‘ indigenous cultures as well, Yang said, showing photos of how bells are used by indigenous tribes in different countries.

In fact, Yang does not define what her works mean to the audiences. She tends to leave that to the viewers. She suggested that we should focus on how the meaning (of her work) can be generated by sharing different perspectives, rather than striving to know the meaning itself.

“I always say the artist’s job is to suggest a phenomenon by producing an exhibition. What I have done for the exhibition is well-described in the brochure, but what I want is generating diverse interpretations by communicating with each other.

“I just want you to enjoy my works. Defining what my works are is like leaking test answers,” she said.
The artist who ceaselessly expands her art world, now has a new interest -- cutting and folding hanji, Korean traditional mulberry paper. The new work, “Five Doing Un-Doing,” on display at the MMCA includes shaman’s paraphernalia created using hanji.

Yang became fascinated with hanji when she spotted decorations made with hanji for use in “gut,” a rite performed by Korean shamans.

“I believe such decorations used for rites exist in other cultures too -- like the bells. I have a strong feeling about it. It will be fun,” Yang said. 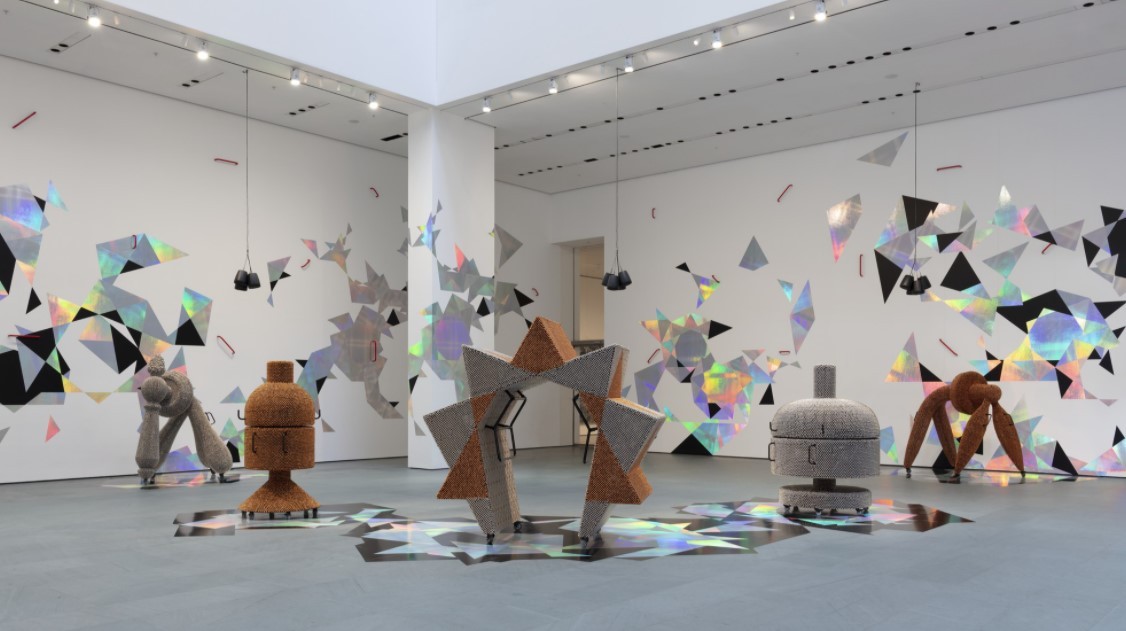 "Slio of Silence - Clicked Core" at MMCA Seoul. (MMCA)
In Korea, there has been a rising interest in better understanding the artist, but relatively little expert information in Korean compared to those that are available in English. Filling that gap is “Air and Water: Writings on Haegue Yang 2001-2020” which has just been published in Korean to coincide with the exhibition opening. The book compiles 36 writings about the artist and her works in chronological order from 2001 to 2020 by international critics, academics, curators and journalists.

While the exhibition in Seoul opened on Sept. 29, three other exhibitions are opening in Canada, UK and the Philippines this month, their openings pushed back due to the COVID-19 pandemic.