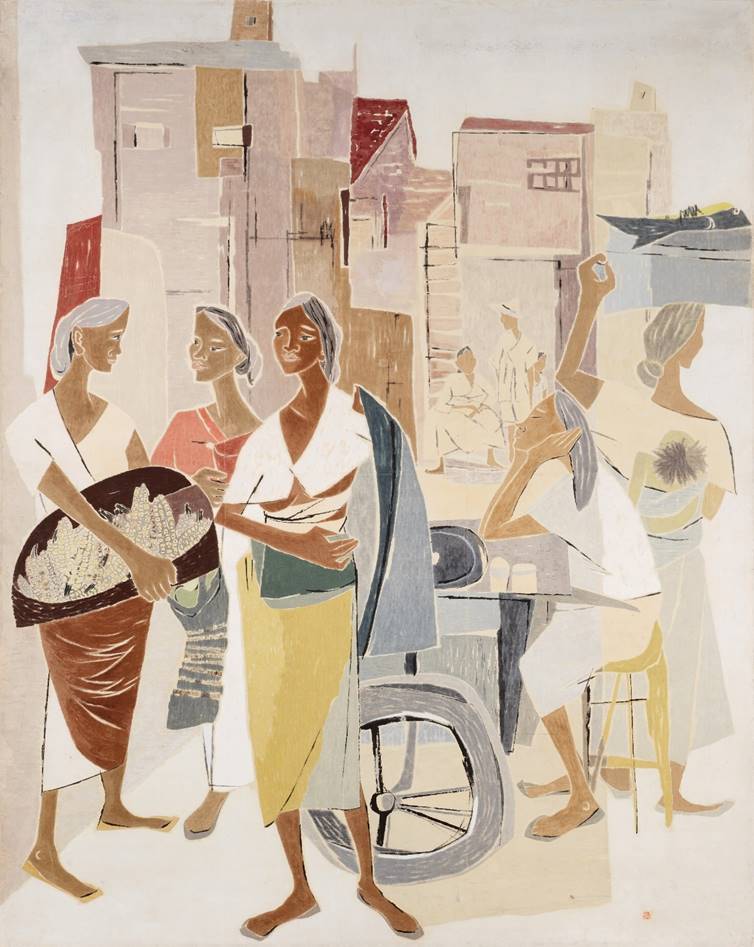 "Open Stalls” by Park Re-hyun (MMCA)
Park Re-hyun pioneered Korean modern art during the Japanese colonial era (1910-1945) and the years when Western culture flooded into Korea after its liberation from Japanese rule.

While Park began her art studies in Japan and her paintings that feature Japanese aesthetics were once highly acclaimed, the artist sought to erase that legacy and went on to develop her own style, contemplating the fundamental aesthetics of Korea. Deeply fascinated by cubism, the style pioneered by Pablo Picasso, she incorporated it into Korean ink-wash paintings with folk subjects such as women at a street stall.

Park began expanding her art practice to printmaking after participating in the Sao Paulo Biennial in 1967 and traveling to Central and South American countries as well as the US. During her stay in the US through 1973, she studied tapestry and printmaking -- mostly etching.

Upon returning home, and until her death in 1976 from a sudden illness, Park experimented with works that combined the unique elements of printmaking and Korean ink-wash painting.

The exhibition “Park Rehyun Retrospective: Triple Interpreter” at MMCA’s Deoksugung venue -- which is located inside the palace in central Seoul -- commemorates the 100th anniversary of Park’s birth, shedding light on her works and examining her influence on Korean modern art.

Despite her talent -- Park won presidential awards at the Daehan Art Exhibition of Korea in 1956 and at the National Art Exhibition of Korea the same year, when she was in her mid-30s -- her artistic path was underappreciated in her lifetime due to the conservative culture in which very few women artists were able to sustain art careers. Park was also the wife of celebrated artist Kim Ki-chang, who was already enjoying great renown. It is often said that Park was left in the shadow of her husband and that her works were underestimated.

The title of the exhibition was chosen to memorialize the artist as a loving wife who mastered English and lip-reading, which she learned to help her husband communicate, and to highlight her excellence as a pioneer in painting, tapestry and printmaking.

The retrospective at MMCA, featuring 138 works by Park, is the first show in 35 years that deals extensively with her art. The exhibition is organized thematically: “Modernism in Korean Ink-Wash Painting,” “Balancing Art and Life,” “International Travel and Abstract Art” and “Printing and New Techniques.”

The exhibition runs through Jan. 3 at MMCA’s Deoksugung venue. Due to the COVID-19 situation, the museum operates on a reservation system. Reservations can be made through the museum’s official website, mmca.go.kr. The online exhibition will be streamed live on the MMCA’s YouTube channel on Thursday at 4 p.m.