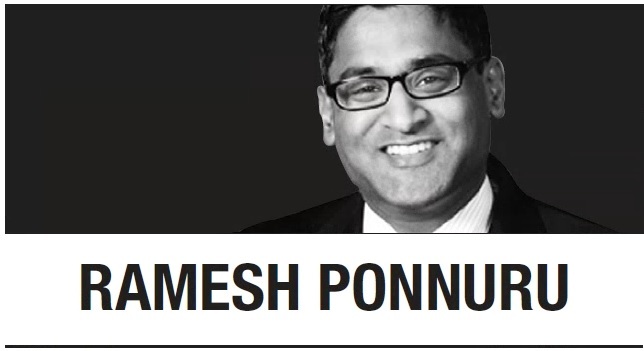 When the World Trade Organization was created in the mid-1990s, the US Senate voted 76-24 to establish it. But it is now facing more opposition than ever, and from both parties.

“The World Trade Organization has been not good for the United States,” President Donald Trump said in a mid-September press conference. “It’s been good for everybody else, but it’s not been good. It was a method, in my opinion, of taking advantage of the United States.”

Bob Woodward’s new book, “Rage,” reports that Trump threatened to leave the organization if it did not classify the US as a “developing country” able to have more leeway to restrict trade. Sen. Josh Hawley, a Missouri Republican, says “we should abolish” the WTO. Rep. Peter DeFazio, a Democrat from Oregon, wants the US to leave it.

The criticisms of the organization tend, though, to be either vague or mistaken.

Trump’s comments fall into the first category, and probably reflect his general hostility to imports. The president sees imports as losses in American wealth. So do some of his trade advisers, including White House aide Peter Navarro and Commerce Secretary Wilbur Ross, a view that seems to be based on a misunderstanding of national income accounting.

Economists generally believe that trade, and the post-World War II expansion of trade assisted by the WTO and its precursor organization, the General Agreement on Tariffs and Trade, has produced large net benefits for the US and the world. They agree as well that trade deficits do not correlate with the most significant economic outcomes, from employment to wage growth.

Trump has also been known to complain that other countries levy higher tariffs on American products than the US imposes on theirs, and may consider the WTO responsible for this state of affairs. But the difference between US trade policies and those of other countries is frequently exaggerated: The average US tariff is about the same as Canada’s or the European Union’s. Policymakers in all these countries have usually recognized that tariffs have harmful effects on the countries that impose them.

The specific indictments of the WTO are not more compelling. DeFazio objects to features of it that do not exist in reality. He complains that it protects foreign investors and that it bans “Buy American” procurement policies. Neither assertion is true. He is on slightly stronger ground in saying that the US loses most cases that are brought against its trade restrictions. But he ignores the fact that the US wins most cases that it brings against other countries’ trade restrictions. That’s not a bias against the US, as the congressman (like the president) claims. It’s a bias against trade restrictions that was rightly built into the organization’s design.

Hawley argues that the US should negotiate favorable trade deals outside the WTO. He wants Americans to start “building a new network of trusted friends and partners to resist Chinese economic imperialism.” Those aren’t bad ideas, but they don’t conflict with membership in the WTO either. (Other WTO critics, including US Trade Representative Robert Lighthizer, think it allows too many bilateral agreements.)

The senator’s description of the network he wants sounds an awful lot like the Trans-Pacific Partnership. The WTO didn’t keep the US from joining it. Trump did. When the US left the TPP, the countries that had been negotiating partners continued anyway. That might happen with the WTO, too, were the US to leave it.

Reforms to improve the WTO are worth pursuing. Its dispute-settlement process should be sped up. It is too difficult to challenge governments’ subsidies for home-country companies, and the remedies the WTO blesses when unfair subsidies are found are too limited. The US could also stand to make more use of options it already has at the WTO, such as by filing more cases against Chinese abuses.

None of these positive steps requires blowing up or leaving the organization. They require not doing that. The US should stay in the WTO at least until someone has offered a plausible account of how leaving it would make American life better.


Ramesh Ponnuru
Ramesh Ponnuru is a Bloomberg Opinion columnist. He is a senior editor at the National Review, a visiting fellow at the American Enterprise Institute and a contributor to CBS News. -- Ed.