The 14-meter-long painting, titled “The Unperceived,” features a collection of surreal scenes scattered across a linen canvas. The scenes were inspired by painter Lee Jin-ju’s personal memories and experiences.

“The Unperceived” -- which gave its name to the exhibition -- attempts to draw empathy from viewers by showing Lee’s personal emotional responses to social issues that people have gone through together. For example, the work deals with the COVID-19 pandemic and the 2014 Sewol ferry disaster, which took the lives of 299 passengers, mostly high school students.

“While I used to focus on my personal narratives, I began to expand to social subjects questioning what would come into people’s minds after going through a variety of social issues we are all experiencing together,” Lee told The Korea Herald. “Although their memories or feelings are quite subjective, I thought we would share some empathy by communicating with each other through paintings.” 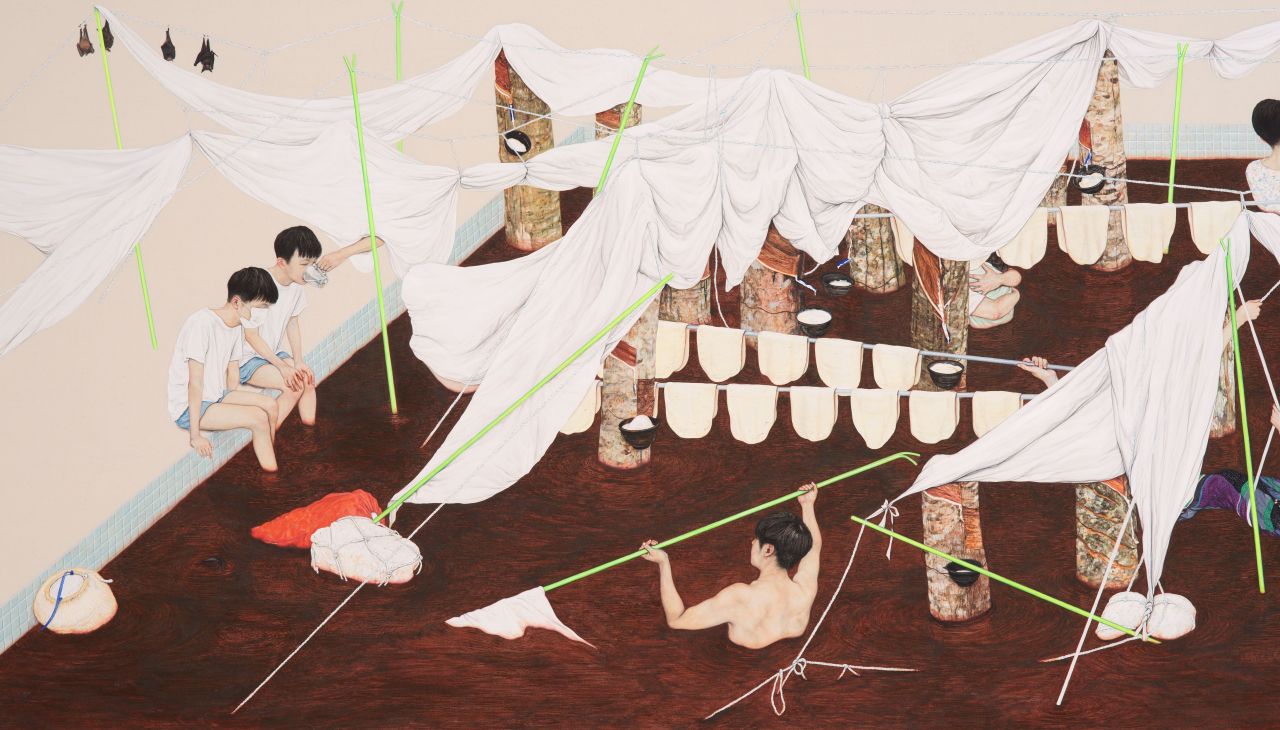 "The Unperceived” by Lee Jin-ju (Arario Museum in Space)
On the second side of the painting, people wearing face masks appear, paddling with their feet in blackish red water, hinting at the current situation of the prolonged pandemic. Yet the painting is not simply grotesque or pessimistic -- it also implies solidarity among people who are overcoming the pandemic together.

As a Hongik University graduate specializing in Asian painting, Lee has a deep interested in Korea’s traditional painting styles. Her unique style originated from the Korean traditional painting genre “jeonsinsajo,” which aims to capture the spirit and mindset of its subjects by depicting them as delicately as possible.

“I consider jeonsinsajo as Asian-style realism. Painters back in the days believed the portraits could capture the spirit of character, even by depicting every single hair,” Lee said.

Scroll paintings, part of a long-established painting tradition in East Asia, inspired Lee to come up with the A-shaped painting.

“You expect what kind of painting will appear by scrolling the paper, which was really interesting to me whenever I encountered such paintings at a museum,” Lee said.

The exhibition -- which runs through Feb. 14 -- showcases seven of Lee’s artworks including “The Unperceived.” Visitors can also enjoy the museum’s permanent exhibition -- the Arario Collection, consisting of 147 artworks from 39 artists around the world, including Damien Hirst, Paik Nam-june, Andy Warhol and Keith Haring.