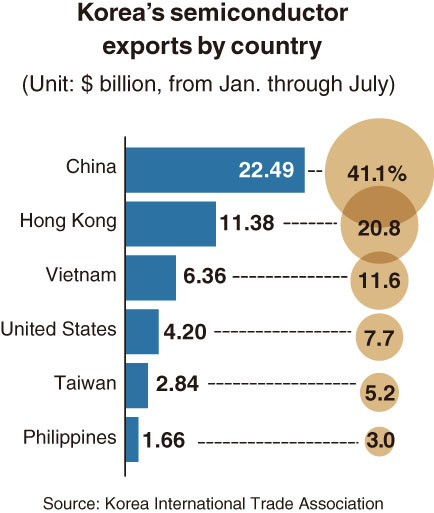 As the new US sanctions on China’s Huawei came into effect Tuesday, South Korea has stepped up monitoring on the impact of the ban on chip sales to the Chinese company.

According to data by Korea International Trade Association, China was the biggest market for Korea to export semiconductors.

From January through July, Korea exported a total of $22.49 billion worth semiconductor products to China, which accounted for 41.1 percent of the country’s total chip exports. And chip exports are the No. 1 export item that shore up the export-driven Korean economy.

However, starting Tuesday, sales of semiconductor and display products that involve any US technologies during manufacturing are banned if Huawei is deemed to be the end user.

Considering the large share of China in Korea’s chip exports, some negative impacts, such as falls in the sales of Samsung Electronics and SK hynix and overall declines in the country‘s chip exports, are likely to follow in the fourth quarter, industry officials say.