By Park Yuna
Published : Sept 7, 2020 - 13:26       Updated : Sept 7, 2020 - 13:33
A painter widely known for the Minjung Art sociopolitical movement that flourished in the 1980s, Choi Min-hwa has unveiled his new “Once Upon a Time” painting series that has been 20 years in the making, inviting viewers to enter a utopia he envisions as integrating the mythologies of the West and the East.

The exhibition, “Once Upon a Time,” at Gallery Hyundai showcases 60 paintings and 40 sketches by Choi that were inspired by “Samguk Yusa,” a collection of legends and folktales mainly from Korea’s Three Kingdoms (Goguryeo, Silla and Baekje) period compiled by the Buddhist scholar and monk Iryeon in 1281 during the time of the Goryeo Kingdom (918-1392).

Among the popular folktales from the “Samguk Yusa” are stories about the founding monarch of Silla Hyeokgeose -- said to have emerged from an egg -- a bear who became a human after eating garlic and the Indian princess Heo Hwangok, who became the wife of King Suro of Geumgwan Gaya. 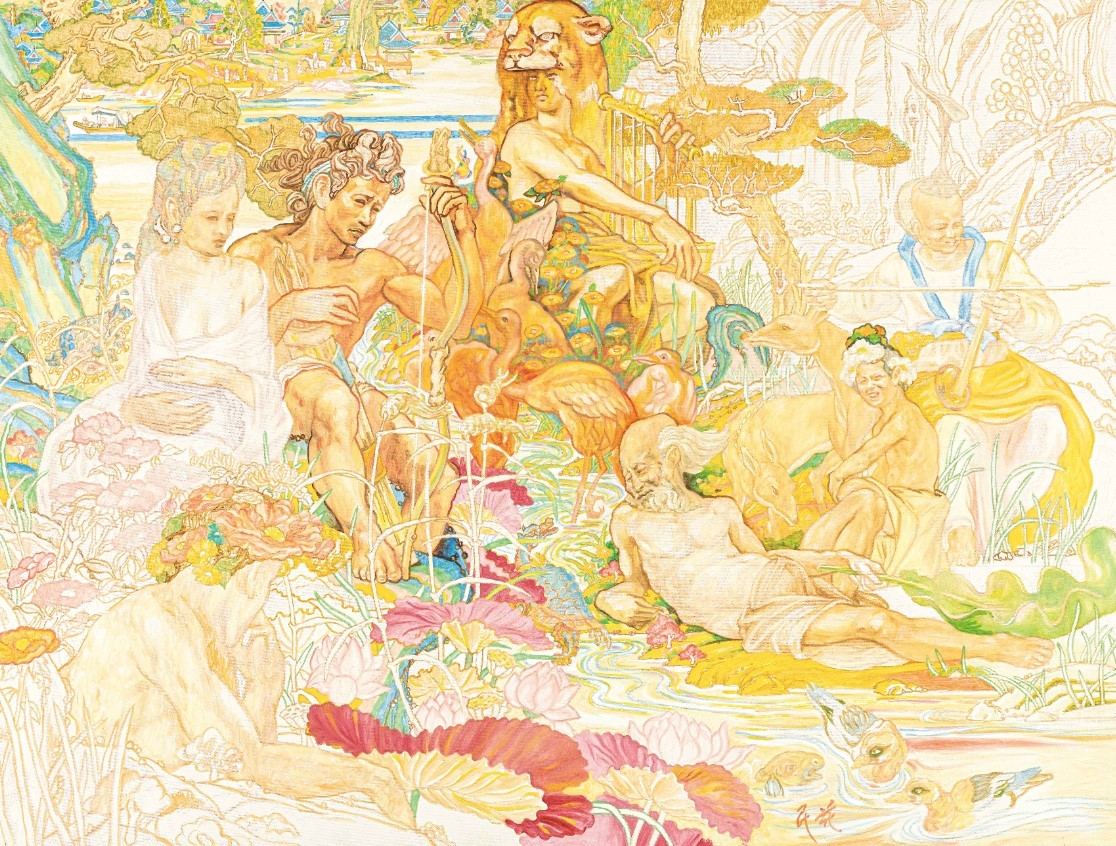 "Joseon Port - Song of Gonghu II,” by Choi Min-hwa (Gallery Hyundai)
The artist does not simply aim to deliver the narratives of “Samguk Yusa,” focusing on the countries from where the myths originate or projecting nationalism. Rather, the paintings encompass both Asian and Western cultures by adopting Renaissance-style muscular male figures, an ancient Hindu painting style as well as elements of traditional Korean paintings, such as “obangsaek,” or the five cardinal colors.

Although the paintings were inspired by “Samguk Yusa,” they expand the realm of human imagination and present a utopia where boundaries of ethnic groups, nationalities and religions do not exist.

Choi began the new painting series in 1998 after traveling through Thailand and India, where he realized there was a lack of visual representations of mythological figures in Korean cultural tradition, compared to other cultures and civilizations. He then began traveling around the world, studying Western and Asian mythologies.

Twenty years’ worth of archival paintings and sketches on display at the gallery basement show how the artist developed his new painting series.

Until the 1990s, Choi was a representative artist of the Minjung Art movement that began in 1979 among artists who held that paintings should reflect social issues, as Korea was ruled by an authoritarian regime.

“With Your Wakeful Eyes,” which measures 7 meters in width, was used at the funeral procession for Lee Han-yeol, a university student who was killed in 1987 during a protest calling for democracy. The painting was damaged by police as they suppressed the funeral that turned into a protest rally.

The exhibition runs through Oct. 11 at Gallery Hyundai in Jongno, central Seoul. Online reservations are required in advance at its website at www.galleryhyundai.com due to the COVID-19 pandemic.