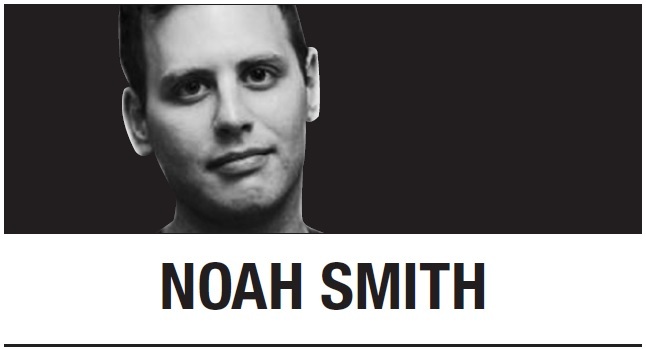 Shinzo Abe, Japan’s longest-serving prime minister, is resigning due to ulcerative colitis. He leaves behind a Japan that is both economically stronger and more socially liberal than the one he inherited.

When Shinzo Abe took over Japan’s leadership in late 2012, I was extremely skeptical. After a short and unimpressive tenure in office in the mid-2000s, Abe seemed unlikely to rise to the challenge of Japan’s faltering economy and unequal society. And the fact he emerged from a right-wing political bloc seemed to portend a less liberal Japan.

But Abe quickly defied the skeptics. He quickly gathered a group of capable advisers around him, including economics professor Koichi Hamada, Bank of Japan Gov. Haruhiko Kuroda, political ally Yoshihide Suga and his own wife, Akie Abe. As a result of their sage advice, Abe’s second term in office looked nothing like the cautious conservatism that characterizes most administrations from Japan’s long-dominant Liberal Democratic Party.

First and foremost, Abe managed to revive Japan’s economy. At the BOJ, Kuroda embarked on the world’s boldest program of quantitative easing, even buying up a significant portion of the country’s stock market. Although this didn’t boost inflation to the targeted level of 2 percent, it did get Japan out of deflation and appears to have stimulated both consumption and -- eventually -- business investment. Despite a severely aging society and the aftermath of a devastating tsunami and nuclear accident in 2011, Japan enjoyed the longest unbroken period of economic growth since the 1980s.

Monetary easing was only one arrow in the quiver of Abenomics, as Abe’s program came to be called. The second, fiscal stimulus, proved harder to implement. Worries about the sustainability of the country’s debt prompted Abe to implement multiple consumption tax hikes, which probably slowed growth. Buffeted by conflicting economic and political pressures, the Abe administration was forced to chart a middle path on fiscal policy, which was ultimately not much of a factor in Japan’s recovery.

The third arrow of Abenomics was a sweeping program of structural reform. Although Abe’s detractors derided the lack of quick results, and some reforms were stymied by political opposition, overall this program laid the foundations for Japan’s long-term economic health. Abe took on Japan’s most sclerotic sector, the politically powerful agriculture industry, and scored major wins, encouraging competition and lowering barriers to food imports. That will ultimately result in more efficient, productive farms and increased food security for the island nation.

Abe also became a general champion of trade agreements and globalism, even as the US sank into sullen protectionism under Donald Trump. He concluded a major trade deal with the European Union and kept the Trans-Pacific Partnership alive after America’s ill-advised withdrawal.

Anecdotes and government data both suggest companies are following the new codes, and corporate profits have surged, boosting tax revenues. Japan is also developing a robust private equity industry, which will help to consolidate a family business sector suffering from a lack of heirs. It will also hopefully push companies toward a more productivity-focused culture. Abe has also tried to reduce the punishing and unproductive overtime hours many Japanese companies force workers to endure.

Abe also opened his homogeneous country up to immigration in an unprecedented way, creating a new guest-worker law that offered a path to permanent residency, as well as a new fast track for skilled immigrants. The result was a surge in workers from overseas:

Increased gender equality and immigration, though done for economic reasons, are transforming Japanese society. Now firmly ensconced in the working world, women are more vocal about challenging sexual harassment, demanding promotions and insisting men do more child care at home. Meanwhile, Japan is becoming a more diverse society, with 1 in 8 young people in the capital city born in a foreign country. Many languages can be heard on the street thanks to an unprecedented tourism boom, and the nation is embracing more mixed-race celebrities.

Abe didn’t simply preside over this liberalization and opening of Japanese society; he actively encouraged it, often in the face of fierce opposition from the right-wing forces many feared would be his support base. When a hate group emerged early in Abe’s tenure to threaten and harass the country’s Korean ethnic minority, Abe vocally criticized the racists and passed the nation’s first law against hate speech, which was then used to prosecute members of the group.

So although Abe resuscitated Japan’s economy and laid the groundwork for future economic strength, his biggest accomplishment was to begin the transformation of a nation many observers had concluded would never allow itself to change. It’s now possible to glimpse a future of a very different Japan -- a liberal, dynamic, open society that is progressive in both economic and cultural terms.

At a time when many world leaders are retrenching into nationalism, protectionism, racism and authoritarianism, Abe defied expectations and became a champion of the embattled notion of liberalism. He leaves behind a legacy future Japanese leaders will struggle to match. But for the sake of their country’s continued strength, dynamism and prosperity, they must try.