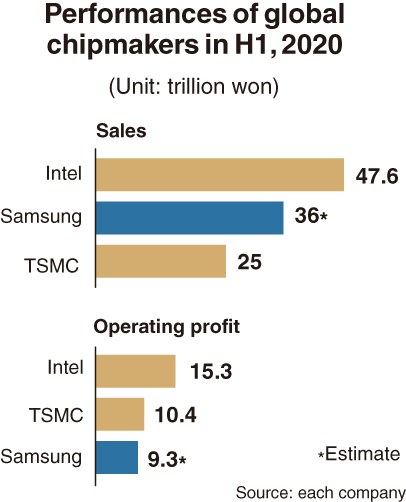 While US-based Intel has maintained the top spot in the global semiconductor market in terms of sales and operating profit in the first half of 2020, South Korea’s No.1 chipmaker Samsung Electronics seems to be falling behind of its Taiwanese rival TSMC.

Although Samsung outstripped TSMC in terms of sales, raising an estimated 36 trillion won ($30 billion) in the first six months of the year, the Korean chipmaker is expected to achieve a smaller operating profit of 9.3 trillion won than TSMC’s 10.4 trillion won.

While TSMC keeps over 50 percent share in the global foundry market, Samsung has announced massive investments over the last six months in order to expand its presence in the non-memory and foundry sectors, which would be reflected in its operating profit.

Samsung is set to announce its Q2 earnings results on Thursday.