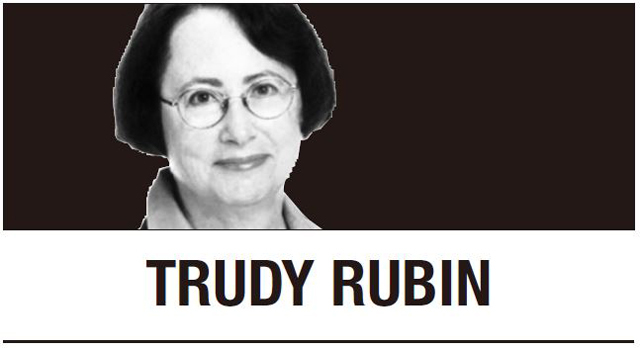 When China imposed a draconian new security law on Hong Kong last week, I grabbed my phone to call some young pro-democracy activists I’d met there in November.

Then I put the phone down because I realized that the old Hong Kong, where free speech and rule of law were allowed despite it being part of China, was over. It was ended by a new security law imposed by Beijing that destroys the rights Hong Kongers were promised by international treaty.

Those high school students, who passionately protested last year against Beijing’s efforts to undermine Hong Kong courts, were now in grave danger. A call from an American journalist might get them arrested.

And make no mistake, Beijing’s new Hong Kong security law has repercussions that go far beyond millions of pro-democracy activists, or the fate of a vibrant, iconic city that hosts thousands of international businesspeople, scholars and journalists.

“Beijing is laying down the gauntlet,” says Human Rights Watch China expert Sophie Richardson, “not just to Hong Kong, but to the rest of the world.”

Indeed, Hong Kong’s fate has become a symbol of a more aggressive China’s approach to global politics. And to the intentions of its increasingly authoritarian leader, Xi Jinping.

Seven million Hong Kongers were promised rule of law and other rights for 50 years following Britain’s 1997 return of the territory to China, in an arrangement called “one country, two systems.” It made Hong Kong the entryway for international businesspeople into China, because the city’s trustworthy legal system differentiated it from the mainland.

And, in the past, “one country, two systems” held out the promise that China itself might one day introduce political reforms.

Rather than compromise with demonstrators, the Chinese leader has decided to crush them. This reflects Xi’s efforts to strengthen Communist Party control at home, and China’s influence abroad, at a time when relations with the United States are more tense, and the West is distracted by COVID-19.

I spoke with Nathan Law, 26, a leading democracy activist and former elected official, who fled Hong Kong last week in order to continue advocacy work abroad, including testifying before Congress.

“What is at stake,” Law said, “is not just the safety of friends, but the survival of Hong Kong as an idea. The security police will now have sweeping powers and can threaten not only Hong Kong people, but (foreign) businessmen, journalists, scholars and even diplomats.

“Beijing wants full autocratic control, and it doesn’t matter if demonstrations are peaceful. No one knows who is in danger, and Hong Kong’s rule of law is destroyed.”

But Xi’s efforts to clamp down on the Hong Kong democratic idea doesn’t mean this historic territory can be transformed into just another Chinese city.

Unlike residents of Shanghai or Shenzhen, young Hong Kongers grew up with democracy. “They are much more determined to resist Beijing’s repression,” points out Hong Kong democracy activist Victoria Hui, now an associate professor at Notre Dame. “How do you silence a majority?”

Moreover, if rule of law is shredded, international businesspeople will face the very problems that led them to prefer Hong Kong. Nor can Hong Kong imitate Singapore, which lacks some freedoms but enshrines a strong legal system.

Rather, cautions Hui, the West must regard China’s repression in Hong Kong as a harbinger of Xi’s global intentions.

“No question, Beijing’s attitude stems from a perception of (Donald) Trump’s weakness,” she contends. The US president’s failure to condemn China’s vast “reeducation” camps for Muslims in Xinjiang, and his hesitancy to critique Beijing’s crackdowns on Hong Kong protesters, have convinced Xi he can act with impunity in Hong Kong.

If Beijing can act with impunity in Hong Kong, it will be emboldened to act similarly with Taiwan, and encouraged with expansionist moves in the region.

Both Law and Hui argue that the United States must stand together with allies in cautioning Beijing against crushing Hong Kong’s autonomy. Possible steps could include targeting mainland officials connected with repression in Hong Kong, or ending Hong Kong’s special trade status, both already authorized by congressional legislation -- or even a boycott of the 2022 Beijing Winter Olympics. Also, the US could offer visas for endangered young activists (who aren’t covered by Britain’s promise to take in many Hong Kongers).

No one questions Beijing’s sovereignty over Hong Kong, but the new law sends warning signals about China’s global vision for its future.

“How far Hong Kong goes down the road to Xinjiang depends on how the world reacts,” says Hui. “If the world looks the other way, it could be much worse.” And not just for Hong Kong.


By Trudy Rubin
Trudy Rubin is a columnist and editorial-board member for the Philadelphia Inquirer. -- Ed.