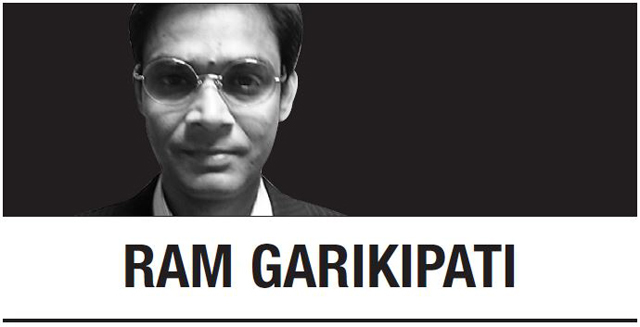 It is laughable, given that Facebook, Google and LinkedIn have been blocked in the mainland for years -- my friends there throw their hands up in exasperation as they have to only use local social media platforms -- and the country is now also blocking virtual private networks.

The Cold War between the “Dragon” and the “Elephant” will last long, as China thinks India is moving closer to the US in geopolitical terms.

The latest standoff was sparked by a clash between soldiers in the northernmost Indian territory of Ladakh. Twenty Indian soldiers died, but as usual the Chinese haven’t revealed how many of their soldiers died -- unverifiable accounts say 40.

China is adept at turning up geopolitical tensions against neighbors -- including South Korea -- to divert “nationalist” domestic public opinion when authorities are woefully inadequate in dealing with crises like COVID-19. The Hong Kong National Security Act is the latest such measure.

A recent report by the Korea Economics Institute of America noted, “China’s punitive economic measures against South Korea over THAAD (a US anti-missile system) may have shrouded Beijing-Seoul relations in uncertainty, yet they highlight the economic dependence on China.”

Yes, Korea has been dependent on China for growth as it is a trade-dependent nation and the neighboring country accounts for a huge chunk of exports.

But the communist neighbor has been flexing its muscles to put spokes in the wheels of growth of neighboring countries, many times unreasonably.

According to a recent report of the think tank Asan Forum, by Darren J. Lim, senior lecturer at Australian National University and his doctorate student Victor Ferguson, while the US-China trade war has dominated geoeconomic discussions in 2019, great power rivalry is far from the only domain in which economic instruments are being used in the pursuit of political or strategic objectives.

“The increasing frequency of … Chinese economic coercion (the threat or imposition of economic costs designed to influence others’ behavior) makes the broader study of economic coercion increasingly important for both scholars and policymakers. There remains a need for greater clarity regarding the nature of power and vulnerability generated by economic interdependence, especially in the Chinese context.”

“The THAAD dispute represents a broad-based coercive episode directed at an ostensibly vulnerable target: China is Korea’s largest trading partner -- the destination of approximately one-quarter of its total merchandise and service exports at the time of the dispute -- and therefore essential to national gross domestic product, 40 percent of which comes from exports. By contrast, South Korea was the source of just 10 percent of Chinese merchandise imports and did not feature among the mainland’s top service suppliers.”

“The headline victim of economic retaliation was Lotte Group, which at the time relied on the Chinese market for approximately 25 percent of its overseas sales. Lotte was targeted because it was directly implicated in the political dispute, having signed a land swap deal to provide Korea’s Defense Ministry with land needed to install THAAD missile batteries in late February 2017.”

Also, prior to the THAAD dispute, Chinese tourists made up 47 percent of total tourist arrivals and 70-80 percent of duty-free sales. Tourism became the industry most affected by the political tensions.

Japan is not far behind -- from the Dokdo islets to comfort women issues and forced labor during World War II -- it continues to turn a blind eye to reality.

Since they have been well documented, I won’t repeat the details here.

To up the ante, United States President Donald Trump invited Korea and India along with Australia and Russia to join an expanded meeting of Group of Seven advanced economies later this year. The event is viewed as an attempt by the US to form a broader alliance against China. Korea accepted the invite, much to China’s chagrin

“China’s aggressive stance in the Indo-Sino border conflict, its handling of dissent in Hong Kong and its retaliatory actions against Canada for arresting the Huawei CFO Meng Wanzhou in 2018, will in the medium term hit China where it hurts the most -- its economy,” according to Nandini Vijayaraghavan, head of Research at Korea Development Bank, based in Singapore.

“China was facing its share of macroeconomic challenges even before the COVID-19 outbreak, namely, slowing though still robust GDP growth, high corporate and household indebtedness and the risks posed by its sizable shadow banking sector. Rightly or wrongly, the country now faces reputation risks on account of perceptions of willfully delaying the reporting of the COVID-19 outbreak.”

She noted that now that India and China have banned each other’s apps, the proxy war between the two nations has progressed to a second round. The Indian food delivery startup Zomato has reportedly not been able to access around $100 million funding from Ant Financial. The development is a Pyrrhic victory for all parties.

“It is in China’s self-interest to rethink its foreign policy and communications strategy.”

Meanwhile, authors Li Lin and Leng Hongtao, of the school of Marxism studies at Dalian Ocean University in Dalian, China, note that “soft power theory, coined by Joseph Nye, is supplement and extension of traditional hard power ideology, and a return to classical realism, as well as a criticism about the fact that neorealism relies overwhelmingly on hard power.”

Joseph Nye proposes that “soft power is a kind of ability which can realize the goal through attraction instead of the violence or the temptation. The attractiveness arises from a country’s culture, political ideals and foreign policies. When the policy is seen as legitimate in the eyes of others, the soft power is enhanced.”

Korea is doing that with Hallyu. India needs to do that with Bollywood and other aspects of culture, like yoga.

I am not sure how the standoff between two nuclear powers with the two largest populations in the world and growing economies will pan out.

Hold your breath, with face masks on.


By Ram Garikipati
Ram Garikipati is a business writer at The Korea Herald. He can be reached at ram@heraldcorp.com -- Ed.