Exhibition showcases 250 artworks by 50 artists from home and aborad in commemoration of 70th anniversary of the Korean War. 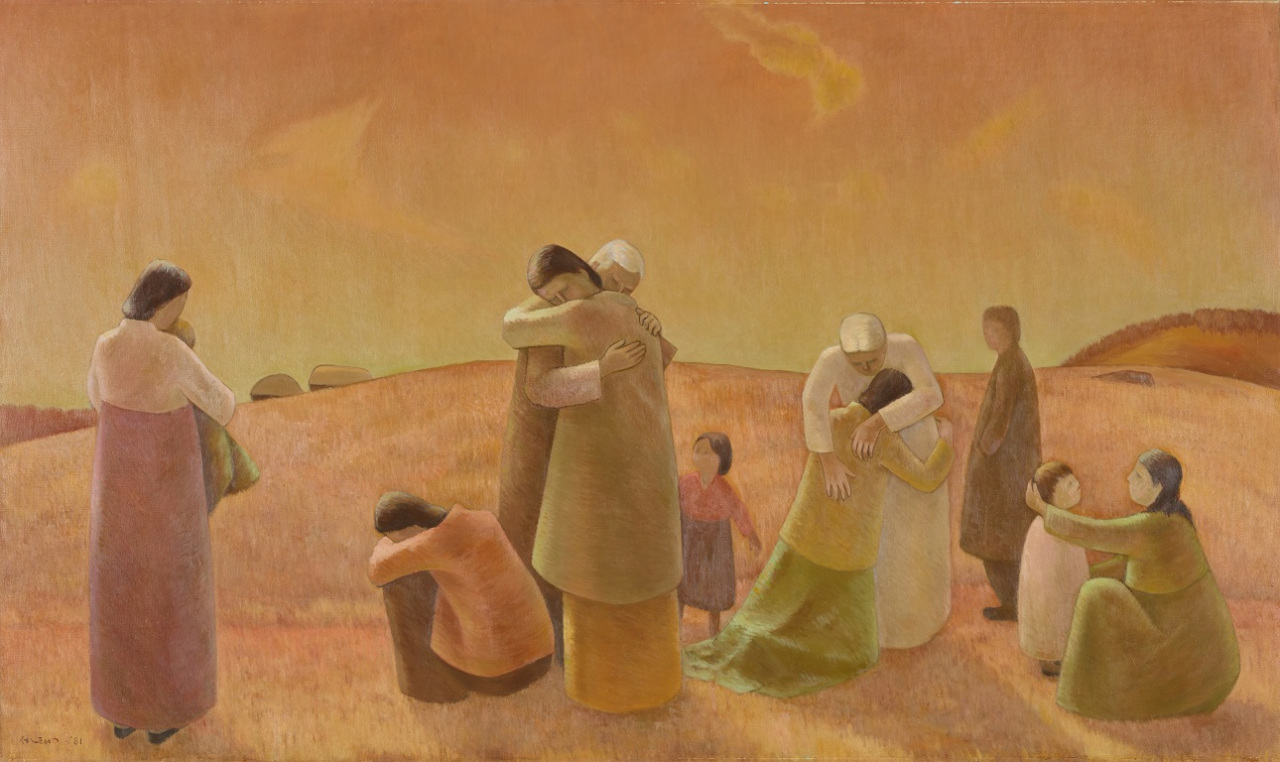 "Returning to Hometown” by Jeong Seon-taek, part of the exhibition “Unflattening” held at MMCA in Seoul from Thursday to September. (MMCA)
The National Museum of Modern and Contemporary Art, Korea (MMCA) is hosting a special exhibition to commemorate the 70th anniversary of the Korean War by looking at the memories of the war captured through artworks and contemplating the lessons learned from the war.

The English title of the exhibition, “Unflattening,” derives from a novel by Nick Sousanis, and suggests that people should look back at the war from diverse perspectives. The Korean title can be translated into English as “Unfamiliar Exhibition.”

“The Korean War has been viewed as a tragedy that has exclusively affected Koreans or [the focus is often] on the result of the war,” Yi Soo-jung, curator at MMCA, told The Korea Herald. “But we wanted to better understand the war through an artistic context and also focus on people from other countries who participated in the war and their stories as well.”

The exhibition showcases 250 artworks by 50 artists from home and abroad, including some who participated in the war.

Chinese contemporary artist Ai Weiwei‘s quote on display at the exhibition --“If my art is unrelated to people’s suffering and sadness, then what is art for?” -- asks about the role of art when people are suffering from a war, disaster and epidemics, such as COVID-19.

The exhibition starts with the “Unfamiliar Memories of War” section, which summons the Korean War through artworks by Korea’s great modern artists such as Kim Whan-ki and Lee Ung-no.

“Living with the War” follows with pieces that reflect on the war’s impact in Korea and abroad. The third section, titled “To Live Like a Human,” explores how innocent civilians were deprived of their rights due to the war. Indian visual artist Reena Saini Kallat‘s installation shows laws from conflict regions to show how even those countries pursue the common value of peace.

The exhibit’s final section “What Is to Be Done?” casts questions on how South Korea can overcome the trauma of the war and its role in the world as a country with the experience of contemporary war. South and North Korea remain technically at war, the 1950-53 war having ended with a truce, not a peace treaty.

The exhibition will be unveiled to the public online at 4 p.m. on Thursday on MMCA’s YouTube channel. Except for the Cheongju venue, MMCA’s three venues -- Seoul, Gwacheon and Deoksugung -- are temporarily closed due to COVID-19. The three venues will remain closed until daily COVID-19 infection cases fall to under 10, in line with the government’s guidelines, the museum said.

“The exhibition aims to deliver a message of peace and humanity, and we hope the exhibition provides an opportunity to think about the role of art amid a pandemic that the whole world is suffering from,” said Youn Bum-mo, director of the MMCA.