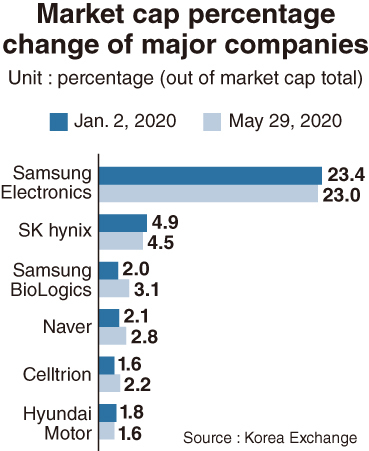 The combined market cap value of South Korea’s 10 largest companies account for almost 45 percent of the entire market, as IT and bio companies gained popularity amid the continued COVID-19 pandemic, data showed Sunday.

According to the country’s bourse operator Korea Exchange, out of the 789 listed companies on the main bourse Kospi, the top 10 companies accounted for 44.7 percent in market cap as of Friday.

Also, the combined market cap value of the top 15 companies stood at 51.4 percent, up 2.5 percent from Jan. 2 this year and exceeding the 50 percent mark for the first time in 10 years.

The market kingpin Samsung Electronics and runner-up SK hynix both saw their market cap percentage slip 0.4 percentage point from January to May. The remaining eight companies in the top 10 list, however, all marked a rise in the corresponding figure during the same period.

The appreciation of the top-tier businesses was largely attributed to the rise of IT and bio shares -- boosted by the non-face-to-face trend amid the epidemic crisis.

But conventional manufacturers, including carmakers, mostly slipped down the list due to sluggish consumer demands.