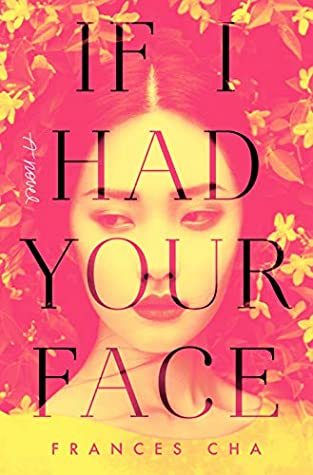 "If I Had Your Face” by Frances Cha (Penguin Random House)
The characters in Frances Cha’s debut novel, “If I Had Your Face,” at first will not surprise those who are familiar with South Korean pop culture, especially dramas and movies, or who follow news from Korea.

“My book is about a group of young women in Korea -- mostly orphans who grew up in the provinces and moved to Seoul the first chance they got,” Frances Cha said. “They are hustling to stay afloat in a very fast, competitive and glamorous society, and without any connections or academic standing, their currency is often beauty.”

The young women in her book range from a woman who is obsessed with her appearance to a woman from an orphanage who falls in love with a wealthy man. At the beginning of the book, it is hard to miss the cliches. Cha, however, does not stop there.

She provides some unexpected twists to the story and characters, reflecting ongoing issues in contemporary Korean society such as unrealistic beauty standards, inequality, gender discrimination, discrimination against people with disabilities and disconnection between neighbors.

The four main characters in “If I Had Your Face” live in the same apartment building.

Kyuri, the first character who appears in Cha’s latest book, works at a “room salon,” a place often equated with the dark side of Korean nightlife, where men pay to have drinks with beautiful young hostesses. Kyuri at the beginning is described as having improbable beauty, which she gained through numerous plastic surgeries.

As the story develops, Kyuri becomes a more multidimensional character, revealing her insecurity through her constant evaluations of other people’s faces. She also presents in detail the life of a woman working in a room salon and what keeps her there, even when she is presented with other career choices.

Kyuri’s roommate, Miho, is a talented artist with a wealthy boyfriend she met in New York. His mother is unhappy with the couple since Miho is an orphan and poor. Similar storylines can be seen in numerous Korean dramas. And like the characters in such dramas, Miho tries hard not to take advantage of her boyfriend and his family.

However, Miho changes after discovering a secret about her too-good-to-be-true boyfriend. She is the character who illustrates the inequality between the rich and poor, especially in a New York house party scene with a bunch of well-off international students from Korea.

Ara, a mute hairdresser who lives down the hall with roommate Sujin, gives the readers a glimpse of the K-pop fan culture. Through this character, the author shows how K-pop fans idolize their stars so much that they become obsessed with their work, their lives and even their scandals.

Ara becomes more interesting when she reveals her violent side and yanks the hair of a woman who has been disrespectful. She also tells a story about her tragic past, revealing how she lost her voice.

Wonna is in an unhappy marriage and envies the other girls’ friendships. The author realistically portrays the loneliness that Wonna feels living in contemporary Seoul. Cha also uses the character to illustrate the hardships that women face at work, especially when they become pregnant.

Along with these interesting and realistic characters, Cha also brings up concepts that are rarely introduced in English literature. For instance, she mentions terms like “iljin,” which refers to a group of juvenile delinquents, and “jeong,” a word used to describe the sense of attachment between people who share a close bond.
New York-based Frances Cha is a former travel and culture editor for CNN in Seoul. She grew up in the US, Hong Kong and Korea.