One month with Galaxy Z Flip

In short, using Z Flip was exciting, although I am still unconvinced it is because it provided more practical convenience.

First with trivial things, flipping the device back and forth with the right thumb, which made a “thud” sound, was truly satisfying, in a nostalgic sense. It reminded me of the plastic flip phones that I had used until the early 2000s.

The biggest reason I didn’t hesitate to purchase the 1.65 million won ($1,335) phone -- with monthly installments for six months -- was the external look when it was folded. Coming in an unusual glossy purple, the palm-size square phone was attractive after the boring rectagular phones that dominated the last decade.

Superficially, owning the hottest device made me feel relevant. More practically, having the palm-sized folding phone better protected my privacy. No more pop-up messages for anyone to peek at. No more news alerts to disturb my sleep as they were less “in-your-face” when the phone was closed.

But I also faced a trade-off. Having to check hundreds of emails and text messages offset the advantages of the folding feature.

When I was bombarded with message alarms, the act of flipping and folding soon became a waste of time. Instead, I opted to use the Z Flip’s free-stop folding feature to keep it open like a small laptop during my work hours. 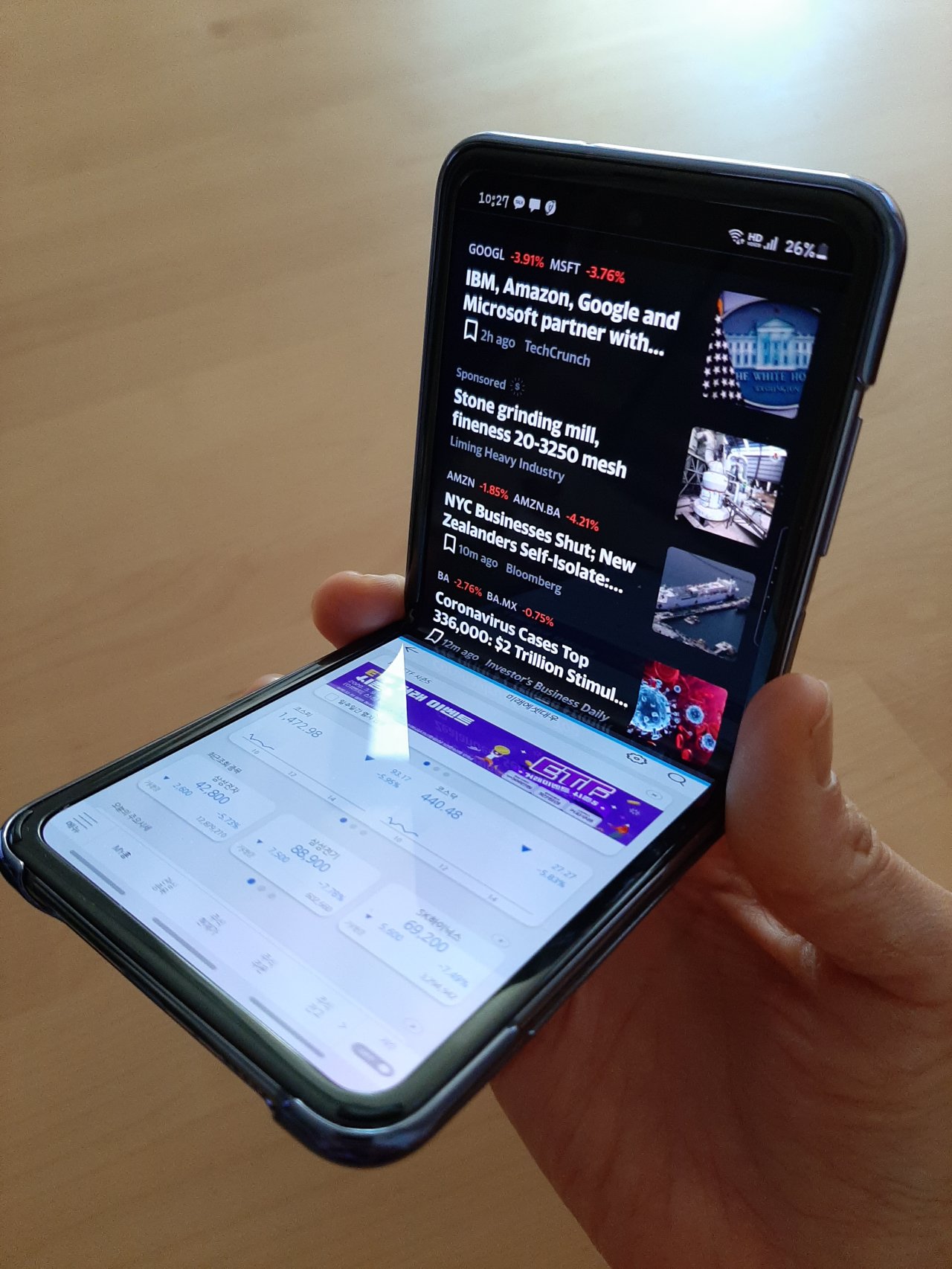 Since it’s powered by a powerful Snapdragon 855+ chipset it is much faster to search news and glean information I need for my stories on the Z Flip, than doing the job on my big, old-fashioned laptop.

I didn’t yet get a chance to enjoy the merit of making hands-free video calls provided by Google DUO video chat, as none of my colleagues use it. We are still Kakao-heavy users.

But I have last two things that might disappoint potential buyers of Z Flip.

As fashionable as the phone is, it is not water-resistant.

Let me recall the first day with my Z Flip. I accidentally dropped the head part of the device -- where a 12-megapixel dual cameral module and a small 1.06-inch cover display are located -- into a bowl of beaten eggs. I screamed in horror in front of my 5-year-old son.

Right away, I called the Samsung after-sales service center for a free checkup visit, a prestigious benefit offered for Z Flip owners, but found out that they charge me if it’s clearly it’s my fault. The engineer told me to be careful of keeping the phone away from water, especially the hinge part.

A few days later, I screamed again because I forgot to dry my hands after doing the dishes before holding the phone. A drop of water fell on the hinge. But it didn’t get into the gap, thank goodness.

Another weakness is the shorter battery life.

Equipped with a combined 3,300-milliampere hour batteries, the Z Flip’s battery drain feels quite fast in comparison with the Note 10+ with a 4,300-mAh battery lasted a whole day.

I missed the Note 10 when I found there was less than 80 percent left before noon, after several phone calls and online research.

I am still enjoying people’s “wow” reaction to my little gadget. And I am getting used to the weirdly tall shape of the device when it’s fully open, and have become very cautious cautious when I use the bathroom.

In conclusion, I wouldn’t necessarily recommend it to working parents simply for the “hip” factor. (But young kids love them, maybe too much.)