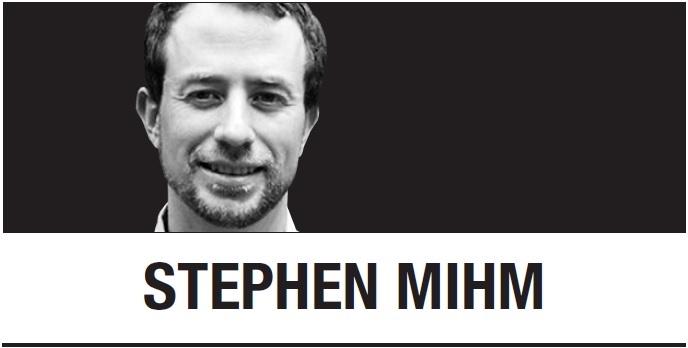 It would be charitable to describe the federal government’s response to the coronavirus pandemic as sloppy and uncoordinated. Thankfully, there is a model for an epic national comeback. It dates back to the weeks following the attack on Pearl Harbor in late 1941, when President Roosevelt created the War Production Board, one of the most dynamic public-private partnerships in history.

The US entered World War II woefully unprepared. It possessed staggering economic power, but almost none of it was directed toward defense. As it sought to ramp up the war effort, supply disruptions for much-needed commodities like rubber would slow it back down. To have a fighting chance, the government would need to recruit hundreds of thousands of factories to wartime production while simultaneously smashing countless bottlenecks in the supply chains that fed them.

Roosevelt didn’t believe the free market was going to solve those problems on its own -- at least not in time. He also rejected the idea of nationalizing key industries. So he opted for a hybrid approach. Businesses took their marching orders from the WPB. But they would still make money and run their enterprises on a for-profit basis. Secretary of War Henry Stimson described the philosophy behind the effort when he famously confided to his diary, “If you are going to war in a capitalist country, you have to let business make money out of the process or business won’t work.”

Who, though, could possibly run such a monumentally complex effort? A chemical engineer by training, as it turned out. Donald Marr Nelson’s first job was at retail giant Sears, Roebuck and Company. Starting as head of the company’s testing laboratory, his preternatural management skills would carry him all the way to chairman of the executive committee.

Nelson’s ability to manipulate the supply chains behind the company’s vast mail order business -- which offered 100,000 items alone -- as well as hundreds of brick-and-mortar stores made him a logical choice to run the WPB. But so, too, did the fact that Nelson did not share the business community’s antipathy toward the federal government. He was what one biographer has described as a businessman-bureaucrat, joining the New Deal in the 1930s, among other government posts. He was put in charge of the WPB in January 1942. In today’s dollars, the US made $61.6 billion worth of military weapons and supplies in 1941. From 1942 to 1945, it produced $3.2 trillion. The WPB was central to that astonishing shift.

Nelson created a flexible bureaucracy that mediated between the military on the one hand and private industry on the other. The military told the WPB what it wanted and when. Then it fell to Nelson and his subordinates to make sure that private industry could secure the necessary raw materials -- often by invoking rationing powers -- and deliver the goods on time. If, for example, the WPB decided to prioritize the production of machine guns over some other weapons, it would take stock of the materials required for that purpose, set it aside for companies capable of making them, and let the firms do the rest.

What Nelson realized, though, was that the country did not have time to encourage the construction of new factories. Instead, it needed existing manufacturers to convert to wartime production. One of the first moves was to order the nation’s auto industry to shift to military supplies.

In effect, the WPB served notice to the nation’s manufacturing sector: Most factories would find a way to produce goods for wartime use -- or close entirely. Faced with this stark choice, companies retooled to produce goods that shared much in common with the original focus of production.

Fortune magazine dubbed Nelson the “dictator of US war production,” but that wasn’t accurate. Nelson was a listener and a diplomat, capable of forging consensus between the very different constituencies he served -- the military, congressional committees, the president, and the owners of the country’s 187,000 manufacturing plants. He sought, not always successfully, to reconcile the innumerable needs of the war effort with these many different interest groups.

As a consequence of the War Production Board’s efforts, the US began churning out more war materiel than any other nation. Within six months of Pearl Harbor, the US had issued military contracts equivalent in value to the entire gross national product the previous year. By war’s end, private firms produced the lion’s share of 6,500 naval vessels, nearly 300,000 warplanes, 100,000 tanks and 4 billion rounds of ammunition. The list goes on.

The US won World War II by deluging the Axis powers with a level of production never seen before in human history. The scale is mind-boggling: Ford’s famous Willow Run plant, for example, produced a B-24 bomber -- capable of holding a crew of 10 -- every 63 minutes. Production ramped up to the point where the nation was producing cargo ships faster than Germany’s 1,000-plus fleet of U-Boats could sink them.

This is what can happen when government and private industry work together. This is what can be achieved when a government authority helmed by capable leaders drawn from the corporate world is given free rein to allocate goods and direct production. And this is what our current moment demands.

If the president genuinely believes he’s a “wartime president,” as he recently announced, he needs to find that other Donald -- a latter-day Donald Nelson. And then he needs to allocate a staggering amount of money to guarantee that we have more than enough ventilators, masks and other supplies to handle this pandemic and any others coming our way. Might some supplies end up unused?

Yes, but keeping inventory down is not how you win a war. And in any case, the cost is a drop in the bucket relative to the bailouts already on offer.


Stephen Mihm
Stephen Mihm, an associate professor of history at the University of Georgia, is a contributor to Bloomberg Opinion. -- Ed.