[Chew on I.T.] Secrets to foldable devices: Samsung vs. Huawei vs. Motorola

The Korea Herald looks at what makes good foldable phone

Compared to September, when the world’s first foldable smartphone Galaxy Fold was unveiled and later joined by Huawei’s first product Mate X, the foldable category has taken a leap forward, with the latest products boasting improved durability and performances.

In a bid to help potential users get familiar with the still nascent form factor, The Korea Herald has looked at what makes a good foldable device and the levels of technologies that ensure durability of the new gadgets that aren’t yet fully trusted.

Users of existing vertical rectangle smartphones would turn a curious eye to the novel mechanism of a foldable device and to how such a sensitive display could endure the stress triggered from the constant act of folding.

By examining the key technologies featured by the three latest foldable phones, users can get a chance to understand how the foldable phones work and what makes a good foldable device.

According to the foldable manufacturers, it is the hinge system that serves as the backbone of the foldable devices.

Having learned a lesson from the first Galaxy Fold edition, Samsung has reinforced the hinge mechanism on the Galaxy Z Flip, calling it the New Hideaway Hinge.

Why “hideaway”? It has been engineered so that the hinge in the central part of the device disappear when opened.

Backed by a special mechanism that makes every flip and fold smooth and sturdy, the Z Flip can stay open at a range of angles between 70 to 110 degrees, as well as fully open and shut.

At these angles, you can easily see the two protective caps at each end of the middle of the screen supporting the upper display.

Nylon fibers have been strategically added in the gaps of the hinge part to prevent dust from entering.

Huawei is soon to release its second foldable Mate Xs that uses its Falcon Wing Hinge.

Because the Mate Xs is an out-folding phone -- with a flexible display wrapping around the hinge -- Huawei’s hinge comprises more than 100 tiny interlocking parts.

Unlike it’s predecessor Mate Xs uses a zirconium composite that is three times stronger and lighter than titanium, in order to enhance durability of the entire device when opened.

Motorola’s Razr, the more direct competitor of the Galaxy Z Flip, has the Zero-gap Hinge.

According to an analysis by CNET, Motorola has placed small steel plates under the screen that go across the width of the phone to make the screen sit flush in the closed position without a gap between the two folded ends.

The plates slide out of the way to make room for the display’s upper part when it folds. When it unfolds, the plates push up against the screen to help it lie flat.

Springed cams are positioned on the edges of the display to guide and pull it completely flat. When opening and closing the Razr, the display actually moves up and down slightly behind the phone’s “chin.”

It is the biggest differentiation point Motorola has in comparison with Samsung’s Galaxy Z Flip, because the two halves of the Z Flip do not close completely shut.

It’s the first question users might have about a foldable phone: Is there any trace of folding in the display?

The crease is often considered a key measure of display folding technology.

When it comes to the crease, the Mate Xs has better reviews than to the other foldables.

Because the OLED screen bends outwards, wrapping around the device, it looks like the display doesn’t have any distortion to images when folded out. That’s a big difference from Samsung’s Galaxy Fold, whose main display folds closed like a paper book and has a clear folding line in the middle of the display when open.

But some reviewers have commented that when the Mate Xs opens to its full 8.8-inch size, a crease is still visible.

Huawei has revealed that the Mate Xs comes with a new quad-layer display structure with two layers of polyamide films on the top of the flexible OLED display and two other polymer layers beneath the main display in order to enhance the durability of the overall device.

While a crease is easily visible in the Galaxy Z Flip, and it can even be felt when scrolling vertically across the device. Samsung boasts that the latest gadget features the world’s first foldable glass.

To avoid its nightmare with the Galaxy Fold last year, in which the top polyimide layer was peeled off by some early reviewers and sparked quality issues before launch, the Korean company has strategically adopted the glass material trademarked as Ultra Thin Glass or UTG to be placed on top of the main OLED display.

In addition to the UTG layer, Samsung has added another protective layer to the Z Flip.

Regarding the touch of the main display, there is an ongoing controversy that the Z Flip display still feels like plastic, not glass.

Together with the hinge, Motorola intended to design a crease-free bendable display. As explained above, steel plates beneath the display are incorporated in the hinge to stiffen the display when the device is open, without leaving a wrinkle or crease.

However, the Razr seems to be less competitive in the display battle.

One reviewer reported the top lamination was peeling off from the main OLED display as a huge air bubble was created in the hinge part after trying out the phone for about two weeks.

Reviewers said the Razr’s top layer appeared to be made of some material composite of plastic and glass. 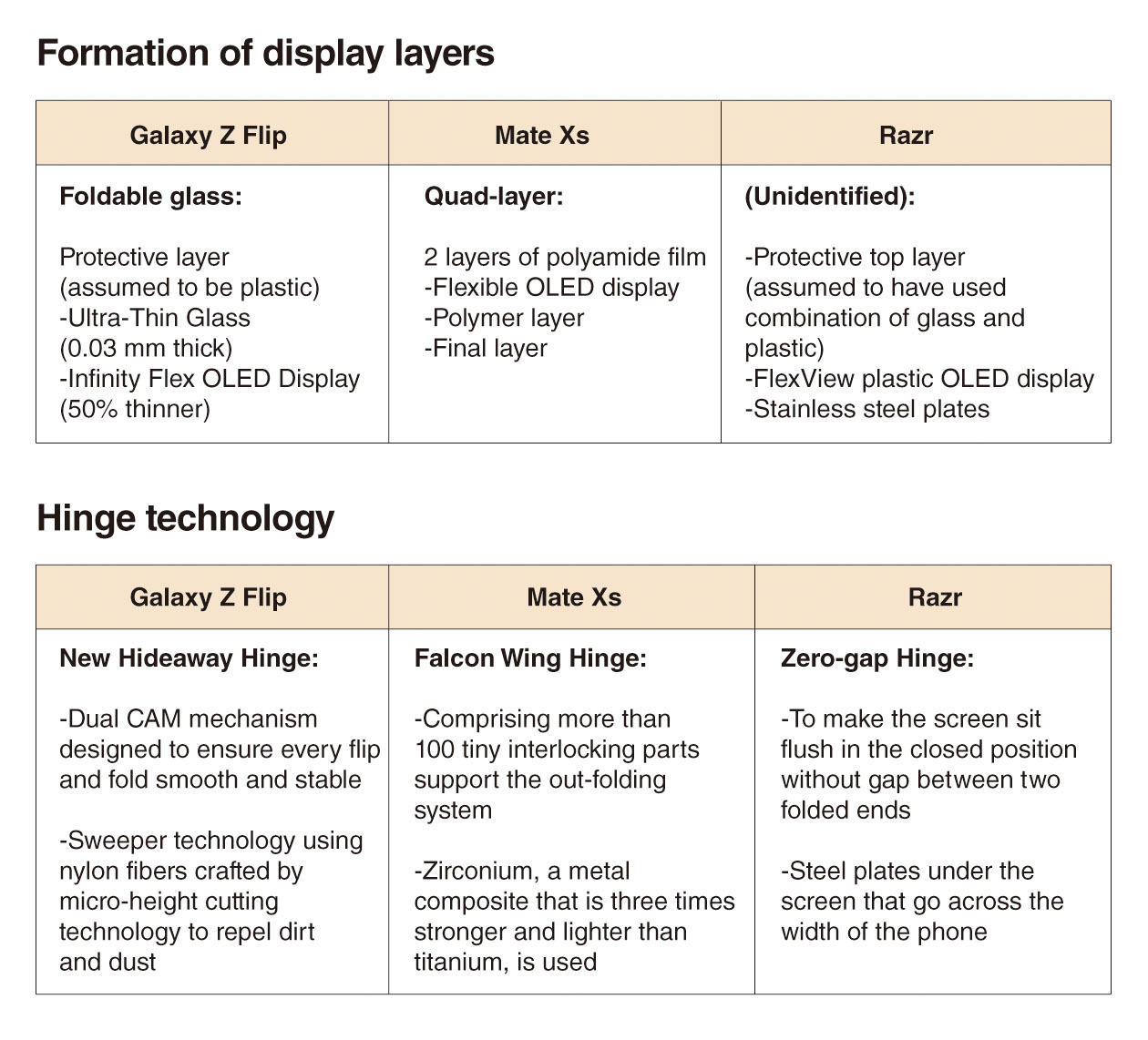