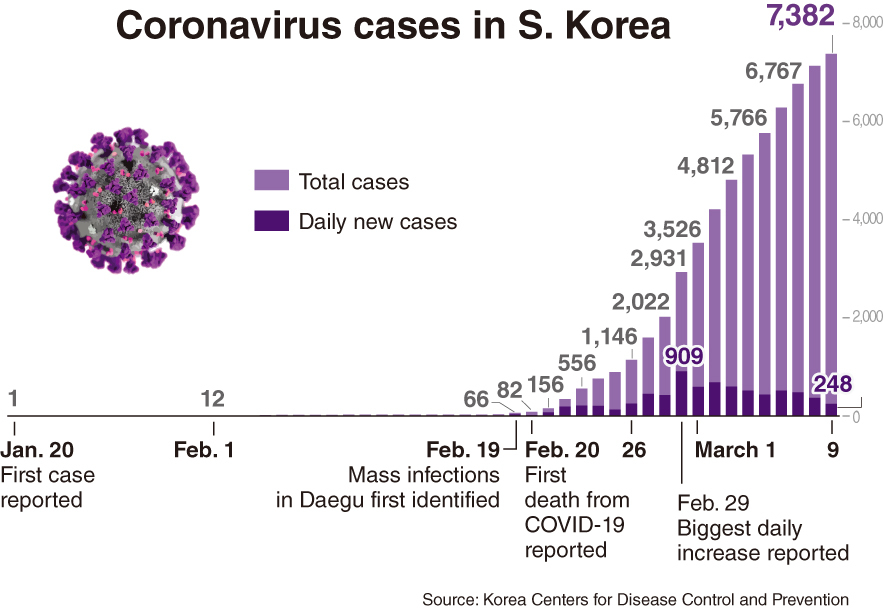 A look back on the past 50 days of South Korea’s coronavirus outbreak shows just how difficult it is to control and how easy it is for health authorities to lose sight of its spread.

The nation’s first confirmed case of COVID-19 was on Jan. 20, and despite a gradual rise in the number of infections, the situation seemed to be under control for weeks. Most cases were traceable to China and other infected countries.

But on Feb. 18, everything changed, with patient no. 31 in Daegu, who attended worship services of a nonmainstream religious group called the Shincheonji Church of Jesus, with hundreds of others.

Fast-forward to Monday, the country has tested over 196,600 people and identified 7,382 infections, the second-most infections after China, where the virus originated, although the number of cases in Italy is rising quickly and briefly overtook Korea’s on Sunday. At least 53 have died and 166 have been released from quarantine upon full recovery.

“Republic of Korea is making progress in fighting COVID-19,” said World Health Organization’s director-general Tedros Adhanom Ghebreyesus via his twitter, after the country reported what appears to be a meaningful drop in new infections for two days in a row, referring to South Korea’s official name.

Yet, officials in Seoul remain vigilant as they now know that this virus, spreading like flu and even symptomless for some, may spread again undetected.

The first COVID-19 patient in Korea was a 35-year-old Chinese woman from Wuhan. The Korea Centers for Disease Control and Prevention raised its infectious disease alert level from “blue” to “yellow,” and asked airports and sea ferry terminals nationwide to strengthen quarantine efforts.

On Jan. 23, China announced a lockdown on Wuhan, suspending all public transport services including buses, railways, flights and ferries. Major highways were also shut down.

Residents were prohibited from leaving without permission from the authorities, but about 5 million people managed to leave the city before the lockdown began, according to Wuhan Mayor Zhou Xianwang.

On Jan. 24, a 55-year-old Korean man who flew in from Wuhan to Gimpo International Airport on Jan. 22 was confirmed as the country’s second case of COVID-19.

On Jan. 27, a fourth case was confirmed, and the government raised its infectious disease alert level by a notch to “orange,” the third-highest readiness level in the four-tier system.

On Jan. 30, the WHO declared the coronavirus the first global public health emergency.

The second batch of evacuees arrived on Feb. 1 and went into isolation at the facility in Asan.

On Feb. 4, Korea began banning entry of all foreign nationals who have been to China’s Hubei province in the past two weeks, and limited entry from the country by tightening visa issuance to Chinese citizens and suspending short-term visas.

The visa-free program for foreign travelers to the southern resort island of Jeju was also temporarily suspended.

On Feb. 5, patient No. 2 was discharged from the hospital upon full recovery, 13 days after he was confirmed with COVID-19.

The third batch of Korean residents in Wuhan and their family members of Chinese nationality arrived in Korea on Feb. 12, and went into isolation at a facility in Icheon, Gyeonggi Province.

The WHO declared an official name for the new coronavirus -- COVID-19 -- on the same day.

On Feb. 15, all of the 366 Koreans evacuated from Wuhan on Jan. 31 were released from quarantine after 14 days of incubation period.

Nine of the 28 confirmed cases in Korea were released from quarantine on the same day.

The second batch of Koreans from Wuhan -- all 334 of them -- were released from quarantine on Feb. 16.

On the same day, the country reported its 29th and 30th confirmed cases, the first suspected cases of local community spread, as they never had contact with other confirmed patients and had not been abroad recently.

On Feb. 18, a 61-year-old woman who never traveled abroad or had contact with other confirmed patients was confirmed to have been infected, marking the first COVID-19 case in Daegu.

On the next day, 20 new patients were confirmed, including 14 who went to the same Shincheonji church as patient No. 31, and one who had contact with her in the hospital.

On Feb. 20, another 53 were confirmed, bringing the total number of confirmed cases to 104 including 28 linked to the Shincheonji church in Daegu and 15 from Daenam Hospital in Cheongdo, near Daegu.

The country’s first death from the coronavirus was reported on the same day.

On the following day, 100 more people including 85 members of the Shincheonji church in Daegu were confirmed, and the government declared Daegu and Cheongdo “special care zones” for infectious diseases.

On Feb. 22, the number of confirmed cases increased by 229 to a total of 433 including 231 linked to the Shincheonji church in Daegu and 111 from Daenam Hospital in Cheongdo.

President Moon Jae-in on Feb. 23 raised the virus alert level to the highest in the four-tier system, for the first time since the Influenza A (H1N1) outbreak.

Last Thursday, the government submitted an 11.7 trillion won extra budget bill to the National Assembly to fight the coronavirus and minimize its economic fallout.