Recent data from a government agency showed that people are still having difficulty holding jobs, which particularly has been witnessed among almost entire generations. 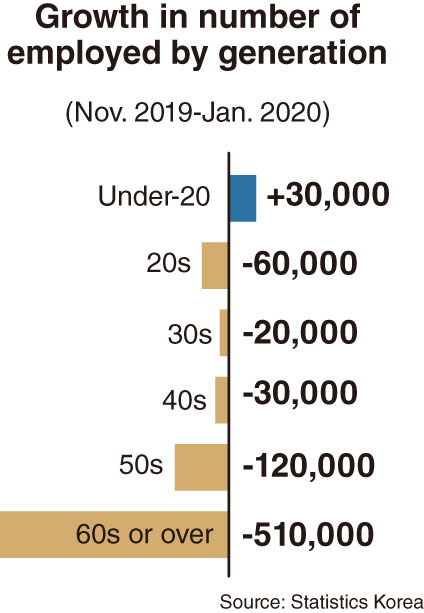 Though the number of hired increased by 30,000 to 200,000 among the youngest group, aged between 15-19, the figure is relatively negligible, given a large portion of them are still studying or training period before entering the society.

The slack hiring performance pulled down the nation’s employment rate among the working-age population, aged 15-64, to 60 percent as of January, which is the lowest in 11 months since it stayed at 59.4 percent in February 2019.

“Formerly, the decrease in the number of employed was serious among a particular generation (40-somethings), who suffered continuous monthly falls for about two years between 2018 and 2019,” a job-recruitment agent said. “But the recent phase is that the decline is seen among all age groups, aged 20 or over.”

He said the critical situation is also seen from the sharply growing payouts of unemployment benefits by the government for the jobless.

Further, more and more South Koreans are suffering from unstable job conditions, as an increasing proportion are employed as not regular workers but nonregular workers.

Over the past two years, there has been a fall in the number of regular jobs -- positions with permanent contracts and consequently greater protections for workers.

According to a Statistics Korea database, the number of regular workers fell to 13.07 million as of August 2019, the most recent month for which data was available, down from 13.42 million two years earlier, or in August 2017.

This data indicates that the number of regular jobs fell by 350,000, while the number of nonregular jobs increased by more than 900,000 over the corresponding two years. President Moon took office in May 2017.

As a result, the proportion of nonregular workers among salaried employees has risen to 36.4 percent, the highest in 12 years since March 2007, when it reached 36.6 percent.

The government agency unveils the relevant data only once or twice per year per year, and the figure stayed under 33 percent between March 2013 and August 2016.

They highlighted a new standard set by the International Labor Organization. But such a re-classification cannot fully explain the 900,000 increase in nonregular workers over two years.