The answer is Apple in terms of profit share, and Huawei Technologies in terms of growth. South Korea’s Samsung Electronics, on the other hand, seems to be sandwiched between its American and Chinese rivals as it could neither reap a larger profit than Apple nor grow more than Huawei.

It may be nothing new to hear that Apple has usually sold fewer handsets than Samsung but earned more, especially since 2018.

The US smartphone vendor accounted for around 80 percent of the entire handset market’s operating profit in the fourth quarter of 2018.

As of the third quarter last year, the iPhone inventor continued to dominate the global mobile gadget market by capturing 66 percent of the sector’s profits and 32 percent of the overall handset revenue, according to Counterpoint figures.

Samsung was a distant second with a 17 percent share of industry profits, although the Korean company saw a noticeable growth from less than 10 percent at the end of 2018.

But Samsung’s status in the market profit share was higher than that of all Chinese competitors combined, as firms like Huawei, Oppo, Vivo and Xiaomi aggressively expanded into low-end and mid-range phone markets.

It was, however, the largest provider of smartphones in the world last year.

According to average figures for global shipments of smartphones by the three organizations, Samsung shipped out 297 million devices in 2019. 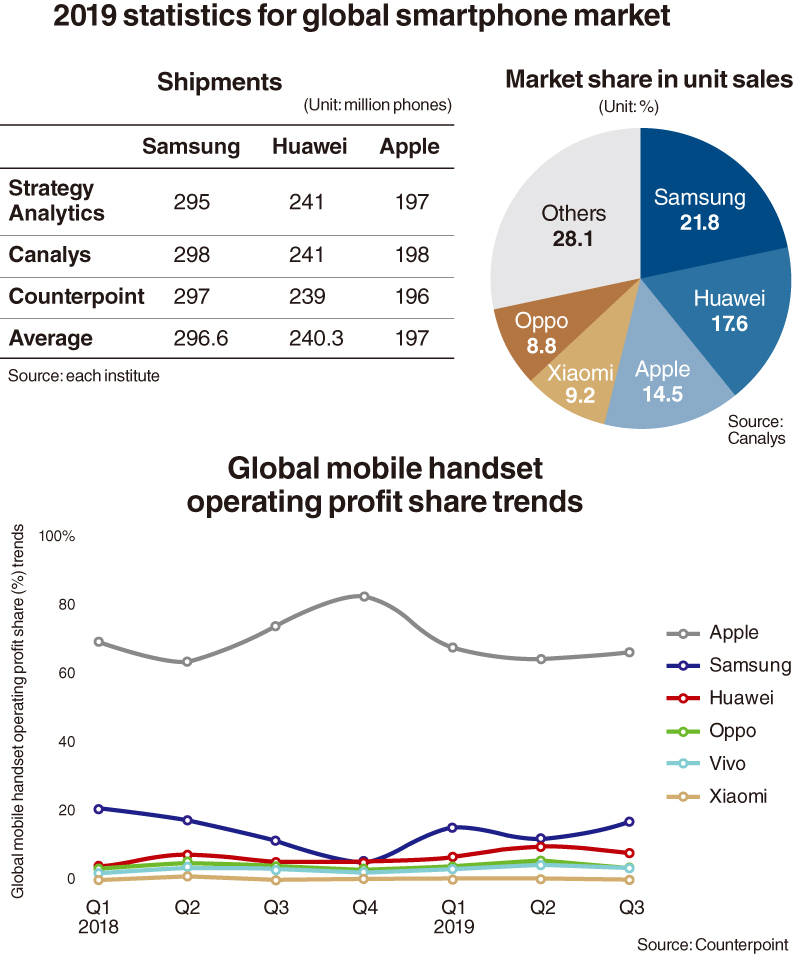 In terms of shipment growth, Huawei showed the highest growth rate of 17 percent from 204 million units in 2018 to 240 million last year, according to Canalys.

While Samsung barely expanded its annual shipments by 2 percent from 293 million to 297 million, Apple saw a fall in shipments by 7 percent last year.

“Considering that the worldwide smartphone market is continuing to shrink, the Chinese players’ aggressive expansion in shipments may change market leadership in the near future,” said an industry watcher.

Especially in the coming quarters, the Chinese vendors that are preparing for full 5G commercialization across the world are likely to gain from the aggressive push and use the opportunity to increase their average selling prices, said the Counterpoint analyst.

Meanwhile, Samsung’s new mobile business head Roh Tae-moon vowed in his first public message released Sunday that the company will show the world how it is going to change the current industry landscape this year, two days ahead of the debut of new smartphone models.

“It’s our responsibility and opportunity to shape the next 10 years of mobile innovation,” Roh said. “You will see some exciting examples of how we’re driving progress, changing the shape of the future and introducing new mobile experiences.”