By Park Yuna
Published : Feb 6, 2020 - 15:48       Updated : Feb 6, 2020 - 18:12
The TV screen at the exhibition hall shows a bird flapping its wings midflight, while through the headset connected to the TV set, one can hear a conversation in which a Korean woman from the 21st century talks about her neighbor, Yeonji's mom. The woman says Yeongi's mom, a victim of domestic violence, was sentenced to 14 years in prison for killing her husband. "... it feels like we're living in the 19th century," the woman says bitterly to the three other women, who are from Vienna in the 19th century, France in 1899 and Russia in 1901.

Although they hail from different backgrounds, they seem to understand each other. The video art, titled “Window” by Song Min-jung, is part of the exhibition “Night Turns to Day” at Art Sonje Center in Seoul, a private art museum known for experimental contemporary arts.

When people welcomed the 21st century, they expected many things to change or improve. The exhibition started with a question: How much have things improved over the past 20 years, especially for women and girls?

“Night Turns to Day” is composed of works from five young female artists in their 30s: Lee Hye-in, Yoon Ji-young, Song Min-jung, An Cho-rong and Kang Eun-young. Their works represent various genres -- sculpture, painting, photography and video art -- and all deal with their experiences as women. 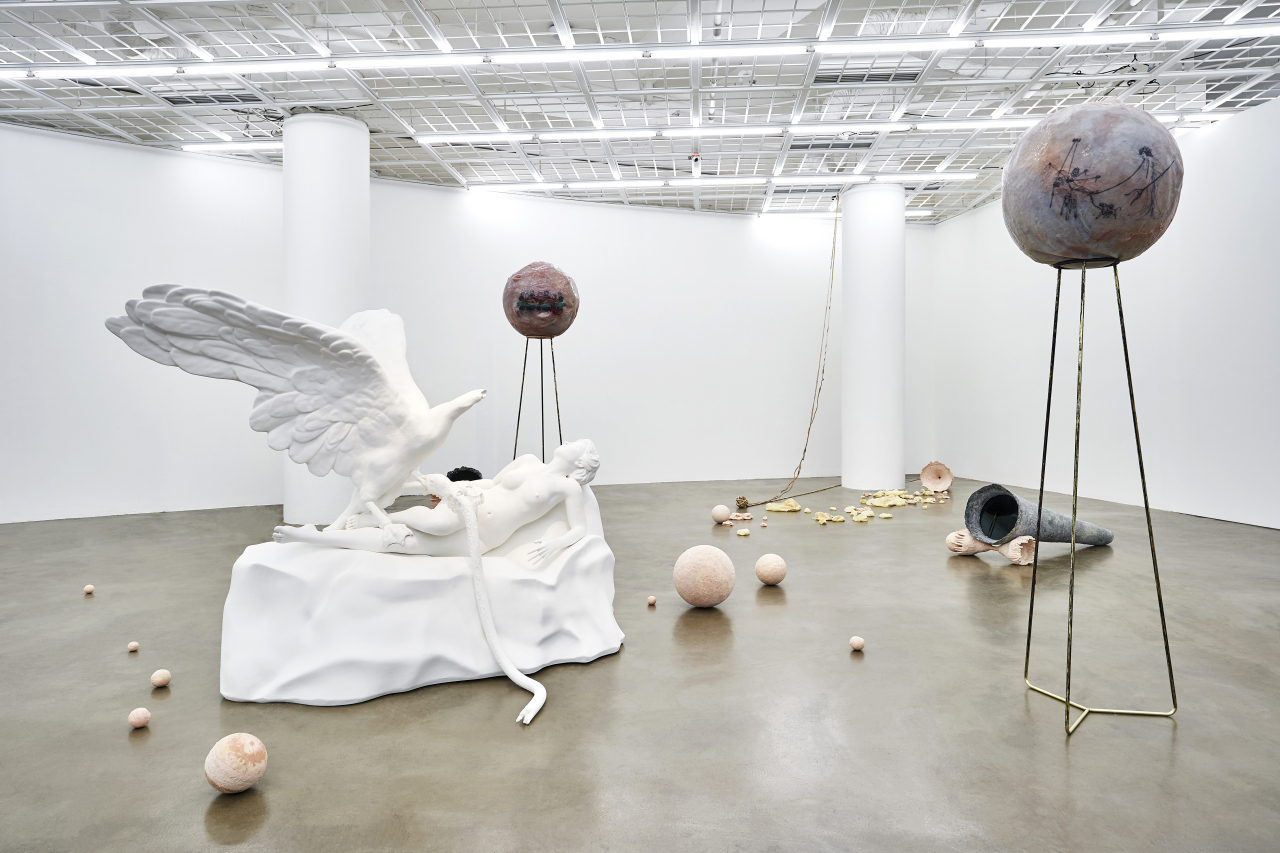 "Leda and the Swan” by Yoon Ji-young (Art Sonje Center and the artist)
Sculptor Yoon challenges some stories from Greek mythology that she considers treat women unfairly. “Leda and the Swan” is about the god Zeus, disguised as a swan, raping -- or seducing in some versions -- the wedded Leda. She bears him Helen and Polydeuces.

Yoon was skeptical about the many paintings that depict the rape scene in a beautiful way with Leda’s face full of ecstasy. In Yoon’s sculpture, the swan appears with its head cut off and its neck grabbed by a hand that appears to belong to Yoon.

For Lee, who grew up watching her mother trim rose bushes in the garden, roses conjure up the image of her mother.

“Mom_looking outside” shows Lee’s mother staring at roses outside the window and her younger self trimming roses. Next to the work, another painting, “Mom_looking inside,” is displayed with most of the painting erased except for the sketch and some colors, implying Lee’s mother has rejected the many roles imposed on her. 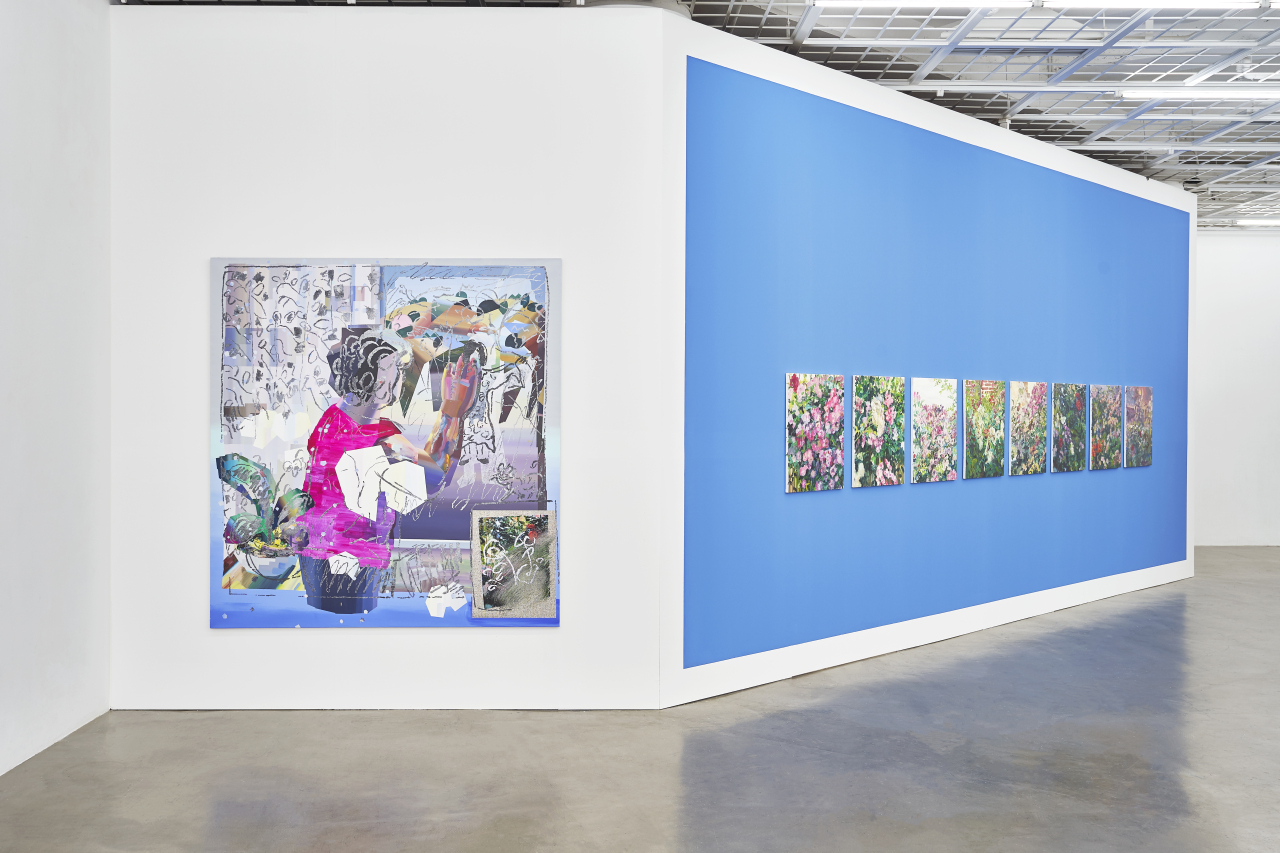 "Mom_looking outside” by Lee Hye-in (Art Sonje Center and the artist)
“We were surprised to see the exhibition has attracted more than 200 visitors a day, which is double the average number of visitors for previous exhibitions,” said Kim Seong-won, who is in charge of public relations at the art center. “It seems people have a thirst about the subject matter of women, which has surfaced in Korean society over the past few years.”

In a corner of the exhibition hall, trees with blue flowers stand tall. Artist Kang, who is also a florist, tried to break the prejudice that “women should be like flowers” by setting up a “Blue Alkanet Tree,” which does not exist in the real world. 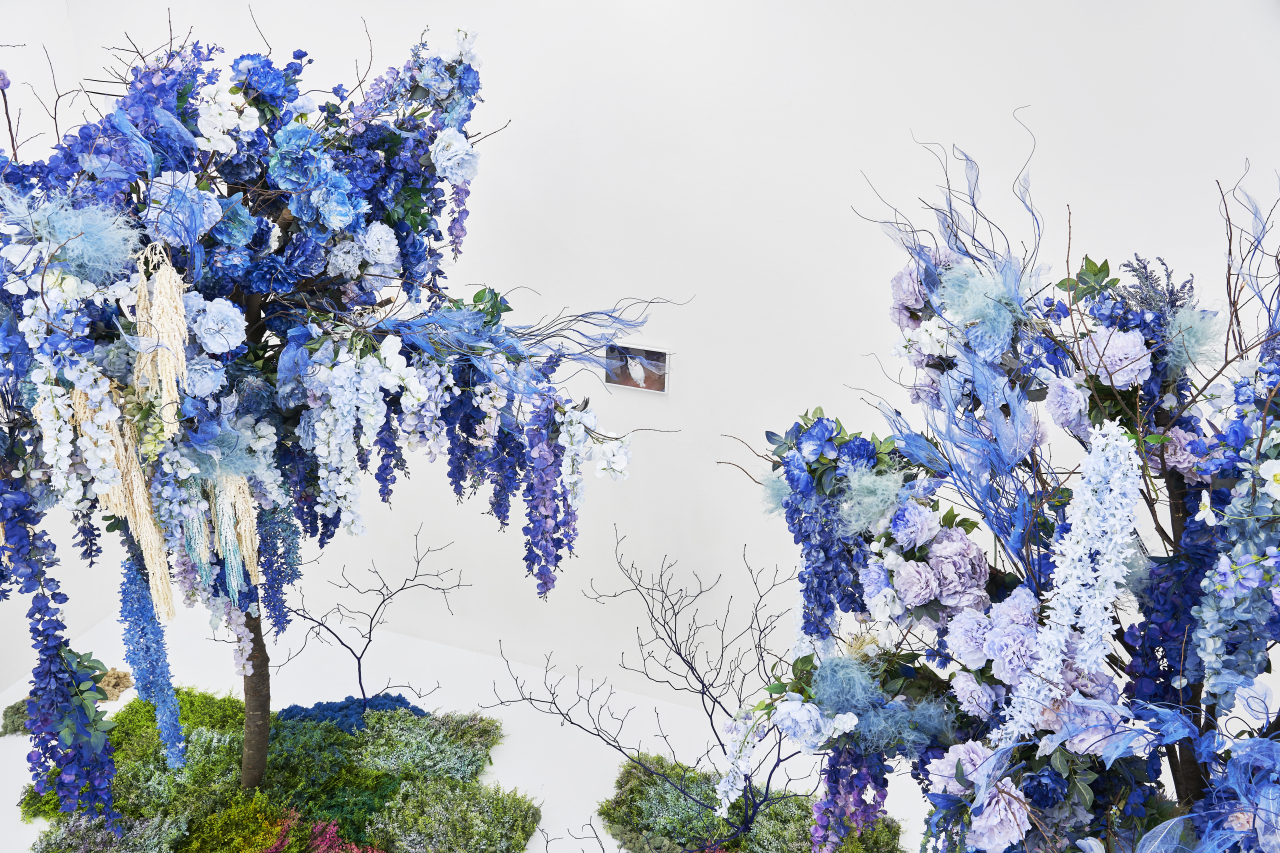