A peek into life at quarantine centers 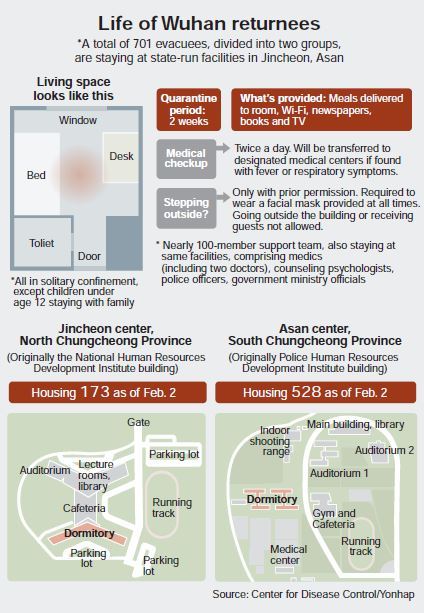 “There is a very low chance of the virus spreading inside the quarantine centers. They are living in solitary rooms,” Roh Hong-in, an official at the government’s central response team, told reporters Sunday. “All Wuhan residents are having their conditions checked twice a day and will be released only after a thorough checkup,” he added.

As the coronavirus spread quickly in China, the Korean government sent chartered planes to virus-hit Wuhan, bringing 701 Koreans home and placing them under 14-day quarantine at the two isolated, state-run facilities.

The virus had killed over 300 in China as of Sunday. Korea has 15 victims so far, with no deaths.

In Jincheon, 173 people are staying at the National Human Resources Development Institute, including 60 people who returned home with their family members.

All adults are using single rooms except for children and disabled who need care from guardians. Each room has a toilet and a shower.

They are required to stay in their designated rooms at all times. Exercising on the balconies of their rooms is allowed but not outside. If needed, they can go to the corridor wearing masks.

Necessary supplies, including bottled water, tissues, towels, shampoo, sanitizer, thermometers and masks, were given to the evacuees upon their arrival.

Food and other daily supplies are being delivered to their rooms. Psychiatrists and mental health experts have also been dispatched to the shelter sites.

Except for medical staff, contact with people at the site is highly restricted. Their trash gets incinerated by a specialized firm after collecting and sterilizing process.

Each room is equipped with free Wi-Fi and a television. From Monday, books and newspaper will be provided on request.

All costs incurred during the evacuees’ stay will be covered by the government.