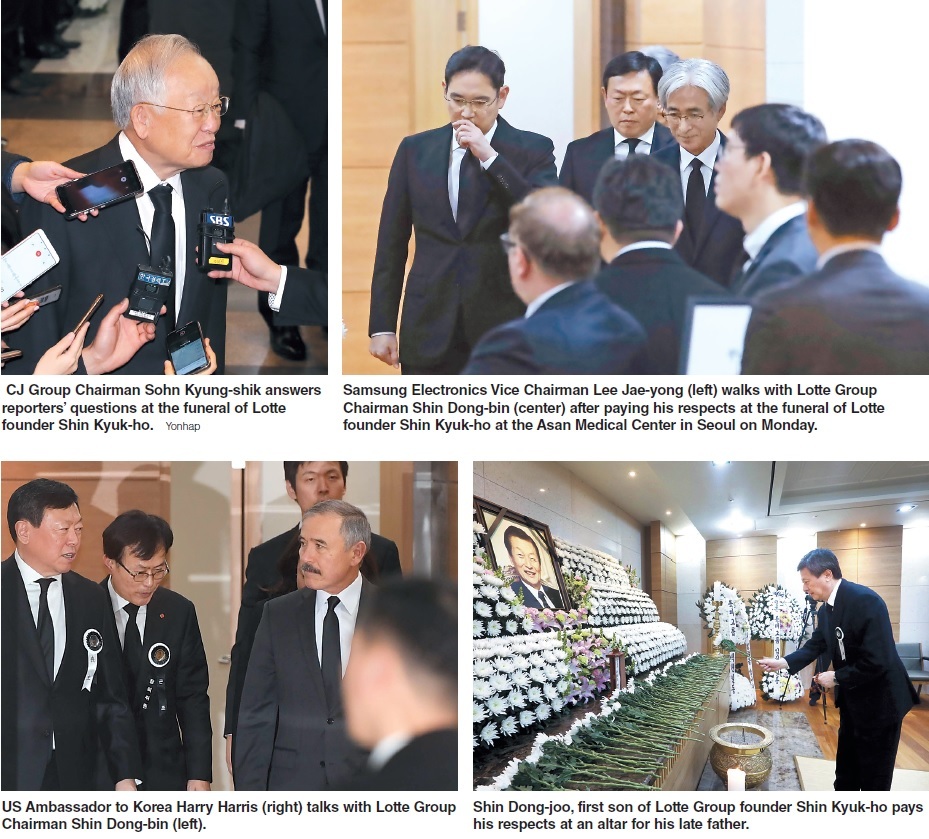 South Korea’s business figures and political leaders joined relatives on Monday to mourn the death of Lotte Group founder and Honorary Chairman Shin Kyuk-ho, a first-generation founder of one of the country’s biggest conglomerates.

At the funeral altar at Asan Medical Center in Seoul, influential figures from various circles came to pay their respects.

In 2015, the two brothers had engaged in a public battle over the control of the company and has since been at odds. The two was meeting again for the first time in one year and three months.

Choi Eun-young, the former chairwoman of the now-defunct Hanjin Shipping came to the funeral on Monday morning. Choi is the eldest daughter of Shin Jung-sook, who is the late Shin Kyuk-ho’s younger sister.

Samsung Electronics Vice Chairman Lee Jae-yong was one of the first outside figures to visit the funeral hall, at around 9:37 a.m. on Monday. Lee stayed at the altar for about 10 minutes to pay respect.

CJ Group Chairman Sohn Kyung-shik came straight to the funeral after his business trip in Japan and expressed his condolences to the late honorary chairman.

“I admired (Shin). He was a legendary businessman and was the best senior in the business circle,” Sohn told reporters.

Kim Sang-jo, Moon’s chief policy secretary, came to the funeral on behalf of the president to offer condolences, on Monday.

According to Lotte Group, the funeral will be held for four days. Late Shin will be buried in his hometown of Ulsan.