Impressionism -- one of South Koreans’ favorite art movements -- originated in late 19th-century France as a rejection of traditional and mainstream artistic styles. Instead, the artists expressed their feelings and impressions with experimental techniques.

The exhibition -- held at the Hangaram Art Museum at the Seoul Arts Center -- includes “Pond With Water Lilies” painted by Claude Monet in 1907, which is being shown for the first time in the country. Among his serial masterpieces featuring water lilies, the painting was completed before the artist lost his sight in the early 1920s.

Monet, the founder of impressionism, was fascinated with water early in his career. It was after he renovated the garden at his home in Giverny in 1880s that he became absorbed in contemplative waterscapes for the next 30 years.

The term “impressionism” came from the title of Monet’s painting “Impression, Soleil levant (Impression, Sunrise)”, which was exhibited in 1874 at an independent exhibition by the artist and his colleagues. 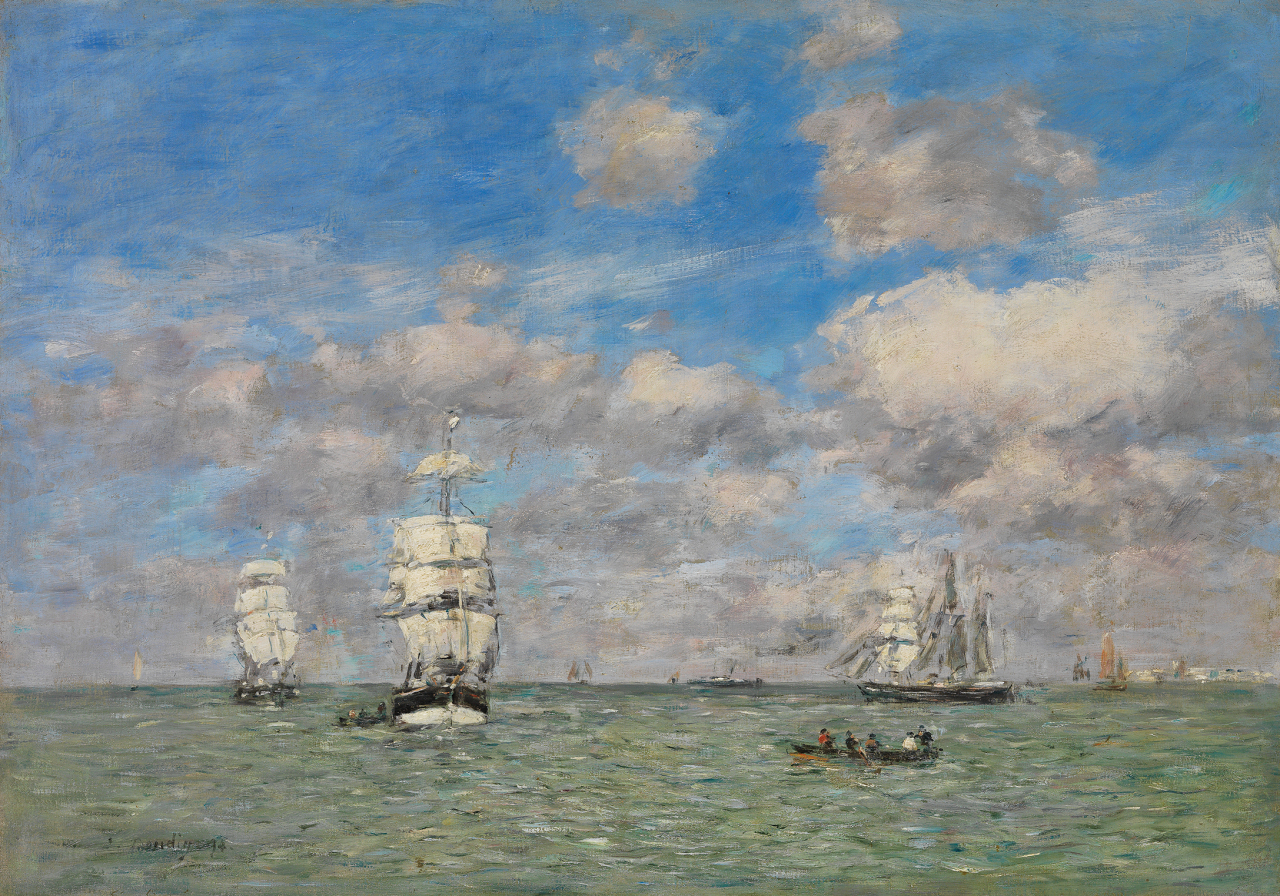 "Frigates Approaching the Port” By Eugene Boudin in 1894 (Seoul Arts Center)
“It is a very special combination and a very new thing for Koreans,” said Sivan Eran-Levian, head of traveling exhibitions for the Israel Museum, Jerusalem, at a press conference Thursday at the Seoul Arts Center. “(The artworks are from) the permanent exhibition at the Israel Museum and is one of our essential, most beloved and viewed galleries,” she said.

“We know the Korean audience is very fond of and appreciative of impressionism masters, and we are proud to share with you this beautiful selection,” she added.

Efrat Aharon, associate curator of the museum’s modern art department, introduced “Washerwomen by the River,” by Eugene Boudin, who was greatly interested in depicting the dignity of working people, an important theme among many impressionists and postimpressionists. The painting shows women, who are seen from behind, stand or kneel to scrub, beat or rinse their laundry at the river’s edge with cloth baskets near at hand.

The Israel Museum, Jerusalem, established in 1965, is the largest museum in the country and the current exhibition is its second in Seoul. “Chagall: Love and Life” was held at the Seoul Arts Center in 2018.

“I am sure that the exhibition will provide a sense of rest for people, especially for Korean visitors who are living a hectic life and have missed a painting exhibition amid the recent trend of interactive-centered media,” said Kang Mi-ran, president of Culture & I Leaders, the co-organizer of the exhibition.

The exhibition opens to the public starting Friday and runs until April 19. The Seoul Arts Center is closed every Monday.