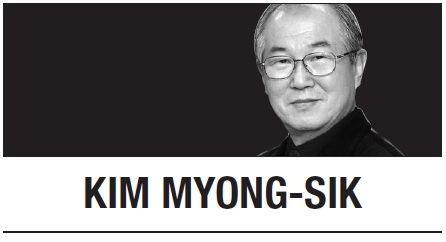 South Korea is a safe place to live. Walking home alone through a back alley at night, one does not have to be too scared, although there’s the chance of confronting a drunkard -- who usually is harmless, however. In daytime, the incidence of pickpocketing or taxi robbery has been remarkably reduced compared with a few decades ago.

The ubiquitous CCTV in all parts of the country may have discouraged petty criminals from grabbing money directly but pushed them toward more sophisticated means of theft, such as voice phishing, which require them to use their brains and advanced communication technology.

Beware of phone calls from strangers just as you would be cautious of rushing cars in the street, and you are safe from hazards in everyday life. But if South Koreans today are relatively free from miscellaneous troubles, they still live under multiple fears.

Yes, we have fears -- about our security on the national level, first of all. We fear death and destruction in a war on this land. Serious pessimists even conjure up the possibility of the South capitulating to the North under its nuclear blackmail or actual attack. If we remain handicapped with regard to nuclear and missile capabilities, South Koreans are afraid these fears could become reality.

The source of the woe is of course the young dictator in the North who pours nearly all the resources of his poor country into developing weapons of mass destruction in the misguided belief that they can ensure the survival of his regime, and that he can use them as a bargaining chip to get foreign aid. Yet the South’s Moon Jae-in administration cannot escape blame.

In contrast to the awesome rise of the North’s military threats, effectively demonstrated by the spectacles of missile tests shown in TV broadcasts here, Moon’s government has taken a series of steps that have caused misgivings about the South’s defense preparedness. Ground force strength is being reduced, forward guard posts have been dismantled and -- most dangerously -- major Army outfits are being eliminated in the name of streamlining the overall defense structure.

President Moon seems to believe that he has planted a sense of peace and security in the minds of South Koreans through his get-togethers with the North’s Kim Jong-un, three times since the spring of 2018. Seoul has faithfully abided by bilateral agreements that were supposed to reduce military tension across the border while Pyongyang has continued to bolster its missile and nuclear arsenal. By now many people suspect that Moon might be thinking that South Korea is not the primary target of the North’s WMD.

The Defense Ministry has confirmed media reports on the changes taking place in the deployment of combat units in the forward area. They include replacing the 1st and 3rd Field Army Commands with the single Ground Forces Command, reorganizing the eight corps into two larger field army-like organizations responsible for the eastern and western defense zones, and reducing the number of infantry divisions to 33 from the present 39.

Within the next three years, total ground force strength will be cut back to 365,000 from the present 464,000 while the mandatory service period for conscripts will be shortened to 18 months from 21. Residents of Yanggu, Gangwon Province, which borders North Korea, are staging demonstrations in their hometown against the planned removal of the 20th Infantry Division.

The restructuring plan dates back to the Roh Moo-hyun administration, which in 2005 announced a comprehensive program to build a smaller but stronger military to cope with reduced manpower while adapting to technological advances in weapons, communication and mobility systems. The Lee Myung-bak and Park Geun-hye administrations amended the plan somewhat, and it is in the current Moon presidency that the slimming down is actually taking place in conjunction with Moon’s peace initiative.

There is an inalterable imbalance in war capabilities between the two sides, no matter what improvements military authorities claim they can make by acquiring state-of-the-art military hardware. At the core of the public fear of war here is the asymmetry in military might, with zero nuclear capabilities in the South.

The US nuclear umbrella is a theoretical thing, while Kim Jong-un’s rockets soaring into the sky pose a real threat. The only way for President Moon to address the deepening fear among his people is to announce a halt to all programs that might be weakening our defense posture until substantial progress is made in the process of North Korean denuclearization. Regrettably, the commander in chief is doing the opposite.

These days, people are displeased as their government appears to be begging for mercy from the North with offers of “humanitarian aid,” which Pyongyang turns down as “audacious behavior.” Moon’s idea of a “peace economy” based on extensive economic cooperation with the North hardly sounds practical at the moment under the UN sanctions regime.

What has gone wrong for the Republic of Korea to find itself in such a sorry state after having built a country 40 times bigger than the North in economic strength and a liberal democratic system achieved through bloody struggles for civil rights and freedom? Fears are not limited to national security but are looming over almost all aspects of our future.

There is the fear of a breakdown of normal politics as forecast by the extended partisan dogfights over certain political bills in the National Assembly; the fear of living in a poorer country, with important economic indicators pointing down after a decline in growth rates for some time; and, last but not least, the fear of having major public institutions lose public trust as their leaders are replaced with the power holders’ cohorts and sympathizers. Deplorable examples include the top court and modern arts museums.

President Moon is not wholly to blame, but extremists who have bred rapidly on both the left and right should share responsibility for the gloom facing the nation as it enters the year 2020. General elections this spring and the presidential vote two years later are feared to leave the nation in tatters, while the security crisis continues. A drastic turnabout is required of our leaders and their followers in their thoughts and acts.