Moon is due in Beijing for a summit with Xi on his way to the southwestern city of Chengdu to participate in an annual trilateral summit among the three Northeast Asian countries.

It would be their first talks in half a year following the previous session held in Osaka, Japan, on the sidelines of a Group of 20 meeting. 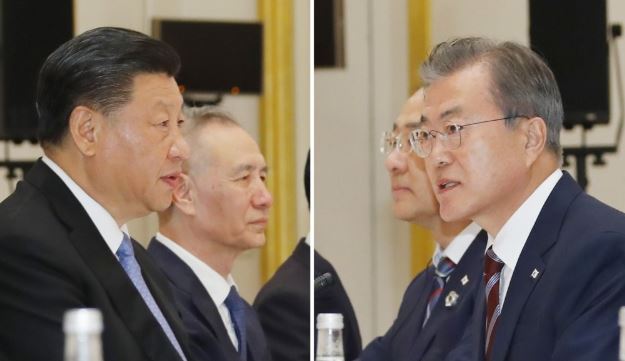 Xi's message on the North Korea issue is especially drawing attention, as Pyongyang is threatening to pull out of nuclear talks with Washington.

The North has set a year-end deadline for the administration of US President Donald Trump to make concessions. It announced Sunday it has decided to bolster its military capability during the latest meeting of the Central Military Commission of the Workers' Party presided over by leader Kim Jong-un.

The secretive communist nation's statement came amid concerns that it may test-fire intermediate range or intercontinental ballistic missiles in the near future.

Xi may raise the sensitive matter of the US THAAD missile defense system in South Korea. Moon is expected to reaffirm his government's resolve to further develop Seoul-Beijing ties.

After having lunch with Xi, Moon is to leave for Chengdu, the capital of Sichuan Province. It is the venue for this year's group summit of South Korea, China and Japan.

Chinese Premier Li Keqiang will host the session, which Abe will also join.

The trade ministers of the three regional powers had negotiations on a three-way free trade agreement in Beijing on Sunday. They agreed to accelerate related talks.

Moon and Li are scheduled to meet bilaterally later Monday.

They plan to discuss ways to promote "substantive cooperation" between their nations on economy, trade, environment and culture.

On Tuesday morning, Moon, Li and Abe plan to hold their first trilateral summit since the previous one in Tokyo in May last year.

In the afternoon, Moon will have one-on-one talks with Abe, which may serve as a chance to improve relations between the neighboring countries embroiled in a monthslong trade fight apparently linked to a dispute over shared history.

In what is viewed as a conciliatory gesture in advance of the Moon-Abe summit, the Japanese government said Friday it has relaxed some export restrictions against South Korea.

The measure affects only photoresist, a chemical used to make semiconductors and one of three products subject to tightened customs procedures.

Moon's office, Cheong Wa Dae, however, said the move may be deemed "some progress" but stressed it is not sufficient to resolve the export control problem.

The Chengdu summit between Moon and Abe on Christmas Eve comes less than two months after they had a brief "impromptu meeting" in Bangkok just ahead of a multilateral summit hosted by the Association of Southeast Asian Nations.

They last had bilateral summit talks in September last year during their visit to New York for a United Nations General Assembly session. (Yonhap)