Most have been forced to close shop or have been saddled with huge debts amid cutthroat competition, but they are getting back on their feet by starting new microbusinesses, although not very successfully.

This reflects the tough job market here, as self-employment is still considered the most viable option for many people to make a living.

According to Statistics Korea, the number of self-employed people still posted 6.66 million as of November 2019, accounting for 23.4 percent of the economically active population of 23.38 million.

Self-employment includes unpaid family workers as well as people who work for themselves, according to global labor standards.

Analysts say the percentage is high compared to major countries, pointing out that the high number of microbusinesses could be the main risk factor for the national economy when the economy stumbles.

As per the latest data released by the Organization for Economic Cooperation and Development, among 38 major economies -- 34 out of its 36 members plus four nonmembers: Costa Rica, Colombia, Brazil and Russia – Korea has a relatively high proportion of self-employed people. 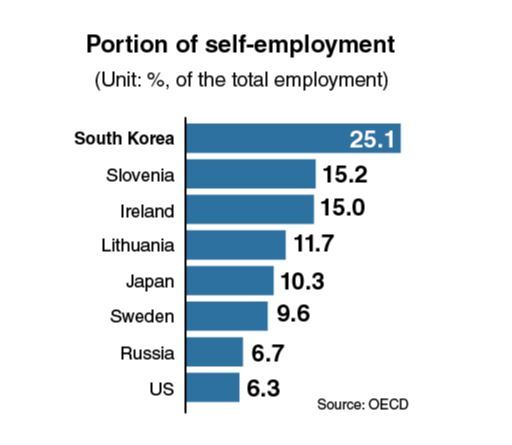 The country recorded 25.1 percent in the portion of self-employed people among the total employed as of 2018, marking the eighth-highest among these economies.

The figures for the US (the lowest among the 38) and Norway (second lowest) stood at 6.3 percent and 6.5 percent, respectively.

Meanwhile, the financial difficulties of Korea’s microbusiness owners -- in line with a higher burden of labor costs and weak consumer sentiments -- is seen from the lending data of commercial banks.

Apart from the first-tier financial firms, a large portion of the self-employed were found to have borrowed from second-tier lenders.

The outstanding loans issued by commercial banks to the self-employed came to 313.8 trillion won ($267.7 billion) as of the end of 2018, up 8.7 percent (or 25 trillion won) from the previous year, Bank of Korea data showed.

The 2017-2018 comparison indicates that loans to the self-employed snowballed by 2 trillion won a month on average throughout last year.

Furthermore, the lending figure for the self-employed exceeded the on-year growth of mortgage loans (up 6.6 percent) issued to the household sector.

According to Nice Investors Service, the number of defaulters among the self-employed -- those who failed to repay their debt within 90 days -- came to 27,917 as of end-2018. This marked a 29 percent, or 6,249 individuals, increase in four years.

The proportion of self-employed delinquents has continued to increase over the past year -- 1.36 percent in March 2018, 1.39 percent in June, 1.41 percent in September and 1.43 percent in December.