[Zev Chafets] Israel will not be third time lucky 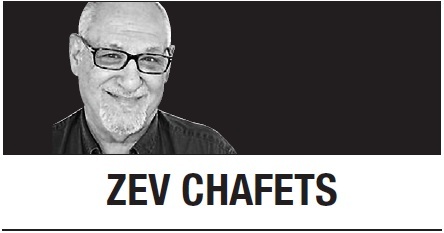 Against all expectations, political logic and basic commonsense, Israel’s major parties have refused to form a unity government, and are dragging an irate public back for a third national election in less than a year.

The contest, scheduled for March 3, will likely reprise the two previous stalemates. Early polls show that the underlying electoral arithmetic hasn’t changed. Israel suffers from the same sort of polarization that currently afflicts many other democracies. It is a recipe for paralysis and disillusionment.

Here is the math. A ruling coalition requires a majority of 61 in the 120-member Knesset. The Likud, led by Prime Minister Benjamin Netanyahu, has a cohesive center-right block of 55 that includes ultraorthodox parties. The centrist Blue and White party, headed by former Gen. Benny Gantz and bolstered by two small left-wing factions, currently has a block of 44.

There are very few actual policy differences between these two coalitions or their leaders. Gantz was Netanyahu’s army chief; the two worked harmoniously for years. Together they could have formed a government majority with a handshake, but couldn’t bring themselves to do it. This was irresponsible of them both.

It is unclear anything will change ahead of another vote. Gantz’s voters loathe Netanyahu. They are mostly Ashkenazi, secular, college-educated and, by Israeli standards, liberal -- just like the prime minister. This makes Bibi, in their eyes, a traitor to his class. The fact that he was recently indicted on three counts of fraud, bribery and breach of trust merely confirms their dire view of him.

On the other side, Likud voters regard the Blue and White crowd as snobs. Likudniks and their allies tend to be Sephardic, religiously orthodox, blue-collar and resentful of the mainstream media. They are not troubled by the prime minister’s legal issues and insist they will stand by their man.

Under Israeli law, an indicted prime minister can continue to serve while being tried. If the Jerusalem district court eventually convicts him, he can hold on to power while the case goes on appeal to the Supreme Court. Given the slow pace of criminal trials, and the quality of his legal team, this could take years. Most leaders wouldn’t want to put themselves or their country through such an ordeal; Netanyahu, having long ago concluded that he is a man of destiny, will try to keep his job by any means necessary.

His best hope to get to the magic 61 seats in March is to bring out a large Likud-bloc vote on Election Day. The traditional means of achieving this is a rhetorical offensive against the growing influence of the anti-Zionist Arab party, known as the Joint List. Netanyahu deployed this tactic in the two previous elections, but it didn’t bring out his voters the sufficient numbers. His best shot this time is to goad Arab List politicians into making extreme statements. List leaders Ahmed Tibi and Ayman Oudeh are too savvy to fall for this, but there are others, especially in the Balad faction, who are prone to such gaffes.

During recent coalition negotiations, Netanyahu accused Gantz of trying to cut a deal with the List’s 13 Knesset members. Gantz denies this: he is no more than amenable than Netanyahu to partnering with politicians who oppose Israel’s fundamental right to exist as a Jewish state. But there are senior members of Blue and White who might be more flexible, in the cause of getting rid of Netanyahu.

The ex-general may be a freshman politician, but he understands how unpopular such a partnership would be with the Israeli mainstream, including Blue and White voters. It is very unlikely that any election result will change his mind on that.

The great wild card of Israeli politics is Avigdor Lieberman. At the head of a party with eight members of the Knesset, he had the power to give Netanyahu’s coalition a majority after the last election. Lieberman belongs to the “innocent until proven guilty” camp, was originally a Likudnik and shares the prime minister’s hawkish security views. Some Likudniks hoped he would come home and put their man over the top.

But that was never going to happen. Lieberman ran to bring Netanyahu down, on a liberal, anti-clerical ticket, promising voters that he would not join a government that included the ultraorthodox parties that are integral members of the Likud bloc. He watched Netanyahu’s failed attempts to secure a majority with undisguised pleasure.

The electoral math and the impasse it has created could change if the prime minister was not at the top of the Likud ticket. Blue and White has indicated that it could enter into a coalition with a Netanyahu-less Likud. Lieberman has floated a proposal to grant him a presidential pardon in return for his promise to retire for politics. This is a long shot. A pardon would require Netanayhu to admit guilt, which he probably won’t. Besides, he wants to run again.

If he does, the next election could well turn out like the last two. For months Israelis have been fed an unceasing diet of cynicism, lies, blatant self-dealing, intolerance and disregard by politicians of all the parties. Many voters will stay home on March 2. Those who do vote will go to the polls with the sinking feeling that, when the ballots are countered and the coalition bargaining is finished, they may find themselves facing a fourth election.


Zev Chafets
Zev Chafets is a journalist and author of 14 books. He was a senior aide to Israeli Prime Minister Menachem Begin and the founding managing editor of the Jerusalem Report Magazine. -- Ed.