North Korea said Saturday that it will use the new technologies it recently tested to develop a strategic weapon to counter the US nuclear threat, escalating tensions with the US ahead of its year-end deadline.

Pak Jong-chon, chief of the North Korean military's General Staff, also said North Korea has "stored up a tremendous power" and the military is fully ready to put into action any decision of leader Kim Jong-un.

"The priceless data, experience and new technologies gained in the recent tests of defense science research will be fully applied to the development of another strategic weapon of the DPRK for definitely and reliably restraining and overpowering the nuclear threat of the US," Pak said in a statement carried by the North's official Korean Central News Agency.

The statement came hours after North Korea said it successfully carried out "another crucial test" at its satellite launch site in a possible sign of further provocations unless its year-end deadline is met. 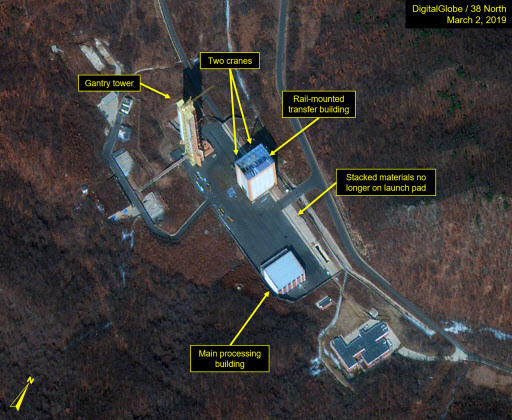 North Korea has pressed the US to come up with a new proposal by the year's end, warning that otherwise, it could give up on negotiations with the US and take a "new way."

North Korea did not elaborate on its seven-minute test on Friday night at the Sohae Satellite Launching Ground, better known as the Dongchang-ri site on the west coast. But experts said the North appears to have conducted another engine test for long-range rockets.

The test came six days after North Korea conducted what it called a "very important test" at Dongchang-ri. South Korea has confirmed that the North tested a rocket engine last week.

Asked about the military's analysis of the latest test, a South Korean Joint Chiefs of Staff officer said that no projectiles were detected being fired from the North on Friday and the South Korean and the US intelligence authorities are analyzing exactly what the North tested.

"We have been closely monitoring activities at and around the Dongchang-ri site and are looking into the intelligence related to the latest test and the North's announcement, along with the US,"

he said, adding that "many of the circumstances this time" are similar to those surrounding last week's test.

North Korea has increased pressure on the US to come up with a new proposal in their stalled nuclear talks, strongly suggesting that it could restart testing nuclear weapons and intercontinental ballistic missiles if none is forthcoming.

The North has recently said that it is entirely up to Washington what "Christmas gift" it wants to get.

"In the situation of the acute confrontation, the US and other hostile forces will spend the year-end in peace only when they hold off any words and deeds rattling us," Pak said.

An ICBM launch or a nuclear test would represent a blow to US President Donald Trump ahead of next year's presidential election as he has boasted of the North's suspension of such weapons tests as one of his key diplomatic achievements.

Trump has warned North Korean leader Kim Jong-un not to interfere with his re-election bid, saying the communist nation could lose "everything." The North said in response that the country has nothing more to lose.

Leif-Eric Easley, associate professor of international studies at Ewha Womans University in Seoul, said the North Koreans clearly want the world to believe that these tests at Sohae will improve the range, accuracy and survivability of their long-range missiles.

"This suggests they want the world to recognize their claimed nuclear deterrent rather than cling to the idea of denuclearization," he said in an emailed comment to Yonhap News Agency.

The latest test came two days before US top nuclear envoy Stephen Biegun's planned visit to Seoul in an apparent bid to keep up the dialogue momentum with the North.

Speculation is growing that he could visit the inter-Korean border truce village of Panmunjom for possible contact with North Korea, though it remains to be seen whether such contact will materialize.

The North has used the Dongchang-ri site to test rocket engines and launch vehicles to deliver satellites, and such technology could be diverted to develop and launch long-range weapons.

In March 2017, North Korea successfully tested a new high-thrust engine at the station, which was employed to launch ICBMs, such as the Hwasong-14 and Hwasong-15, later that year.

Amid stalled denuclearization talks, North Korea has carried out a series of weapons tests in recent months mostly involving short-range missiles. The latest one took place on Nov. 28, when Pyongyang tested its super-large multiple rocket launcher.

Separately, South Korea's Deputy National Security Adviser Kim Hyun-chong tweeted on Friday that he held in-depth discussions with US Forces Korea commander Gen. Robert Abrams and US Marine Corps Maj. Gen. Thomas D. Weidley on the situation on the Korean Peninsula as well as sharing the costs for the upkeep of American troops in South Korea. Kim did not provide details. (Yonhap)