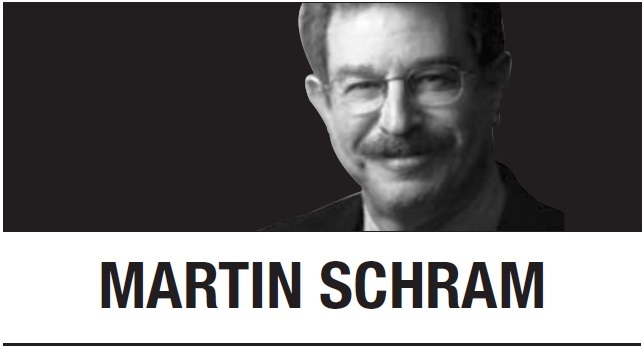 As the House Intelligence Committee has ended its hearings and is racing at a most un-congressional top-speed toward an apparent impeachment of President Donald Trump for crimes including bribery, we need to rewind and cover a late-breaking impeachment witness who almost everyone missed.

Testimony came from a definitely knowledgeable first-hand eyewitness who addressed the same topic that was testified to so memorably and powerfully on Thursday by Trump’s former National Security Council staff expert on Russia, Fiona Hill.

A staunch nonpartisan hard-liner, Hill courageously and patriotically admonished the committee’s Republican hard-liners who were so combative and dismissive of all witnesses who dared to testify truthfully about Trump’s actions.

Trump had withheld approval of a White House meeting with Ukraine President Volodymyr Zelenskiy and military aid for his troops now fighting Russians until Ukraine agreed to two political investigations Trump was demanding: probe a US right-wing conspiracy theory that the 2016 US election interference wasn’t initiated by Russia to help Trump, but by Ukraine; and dig for political dirt that will damage Democratic front-runner Joe Biden.

“Based on questions and statements I have heard,” Hill testified, “some of you on this committee appear to believe that Russia and its security services did not conduct a campaign against our country -- and that perhaps, somehow, for some reason, Ukraine did. This is a fictional narrative that has been perpetrated and propagated by the Russian security services themselves.”

Hill knows her subject very well. Her last book was titled “Mr. Putin: Operative in the Kremlin.” And that’s why you would have wanted to also hear this rather different -- and definitely not-to-be-trusted -- account that was offered Wednesday outside the hearing room -- way outside it. This speaker was a former KGB operative who wound up as the man in charge of Russia’s secret services Hill discussed -- and everything else.

Putin chose to address the same subject, albeit from a different viewpoint. He was onstage at Moscow’s World Trade Center, at an event billed as the “‘RUSSIA CALLING!’ Investment Forum.” And Russia’s most powerful Operative in the Kremlin sought to project solidarity for his pal.

“Thank God no one is accusing us of interfering in US elections anymore!” said Putin. “Now they’re accusing Ukraine. Well, let them sort it out among themselves. But this factor of the domestic political struggle affects -- still negatively affects -- Russian-American relations. I hope that this will someday end. We are ready for this.”

Meanwhile, Hill, being an expert on Putin and his ways, was patriotically direct, “The unfortunate truth is that Russia was the foreign power that systematically attacked our democratic institutions in 2016. … It is beyond dispute, even if some of the underlying details must remain classified.”

Trump seems oddly ready for the reality that he’ll soon be an impeached US president who is running two simultaneous campaigns in 2020. Trump will begin campaigning for reelection while also campaigning for votes within an electorate of just 100 senators. Barring new revelations of as yet unknown scandals, it seems inconceivable that a required two-thirds of the Republican-controlled Senate will ever vote to convict and remove Trump as president.

And Trump surely knows that. What he still seems not to know is just how he got himself into this impeachment mess. It happened because he has never understood the consequences of his words and deeds. In 2016, Trump and his campaign head, Paul Manafort, aligned themselves with Russia to the extent that they removed a proposed provision in the Republican Party platform to provide military combat aid to Ukraine.

Trump also suggested in interviews that maybe Russia ought to keep Crimea -- which it had militarily seized and annexed. No wonder some Ukraine officials wound up supporting Hillary Clinton. Trump, a vindictive grudge holder, complained to a May 23 meeting with advisers that Ukraine tried to take him down in the last election,” according to testimony by Trump’s unannounced Ukraine envoy, Ambassador Gordon Sondland.

But while Trump is likely to beat his impeachment, he and his Republican defenders are in danger of committing perhaps their most egregious offense of all by vengefully refusing to go all-out to defend America’s elections and democracy from the most severe cyber-sabotage attacks ever.

As we were warned in Hill’s most urgent testimony:

“The impact of the successful 2016 Russian campaign remains evident today. Our nation is being torn apart. Truth is being questioned.

“Right now, Russia’s security services and their proxies have geared up to repeat their interference in the 2020 election. We are running out of time to stop them. … I would ask that you please not promote politically driven falsehoods that so clearly advance Russian interests.”