In the 2010s, they led countless smash hit variety and reality shows including "Infinite Challenge," "Running Man," "Two Days, One Night" and "Golden Fishery" and swept year-end TV awards given to the brightest entertainers of the year.

But their presence had diminished in the last few years as the media landscape expanded to cable TV channels and even to online and mobile platforms like YouTube and Netflix.

Their outdated and unpopular shows, including Yoo's "I Am A Man" (2014) and Kang's "Invisible Man" (2015), both on KBS, were terminated earlier than originally planned. They have not been invited to award ceremonies for years. 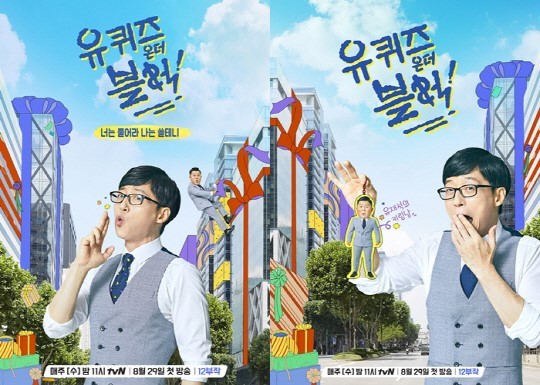 "Yoo Quiz on the Block" (tvN)
Many people said that the decadelong reign of Yoo and Kang had come to an end amid the rapidly changing media market.

However, the two legendary entertainers have recently made their presence felt again on the small screen with new shows.

Yoo's first Netflix appearance, "Busted!" (2018), reminiscent of his flagship reality show "Running Man" with its mixture of a mystery and thriller, caught the eyes of binge-watching people. Its second season has been available since last Friday.

In tvN's "Yoo Quiz on the Block" (2018), a quiz show with random people on the street, Yoo's familiar and friendly image shines. He makes people readily respond to a request to be on the show and often share their life stories, albeit for a short time.

His latest reality shows "Laborhood on Hire" on tvN and "Hangout with Yoo" on MBC help viewers recall Yoo's reckless challenges and abilities shown on "Infinite Challenge" years ago.

People have been crazy about his attempt to become a trot singer under the stage name "Yoo San-seul" on the MBC show.

Meanwhile, Kang, an athlete-turned-comedian, has successfully carved out the second phase of his career in cable TV shows. He has adopted an avuncular manner instead of his original big brother image.

Starting in 2015, tvN's "New Journey to the West" series has helped him regain his popularity and re-establish his status as a tip-tier TV show host. Its familiar concept of going on an overnight backpacking trip with various games has received favorable feedback throughout seven seasons.

Experts said the two entertainers have adapted themselves well to the change in their surroundings.

"After years of struggling, they read well the trend of the current media market and moved over to new platforms," culture critic Ha Jae-keun said. "If they kept living a comfortable life, they would have hardly made this rebound." (Yonhap)