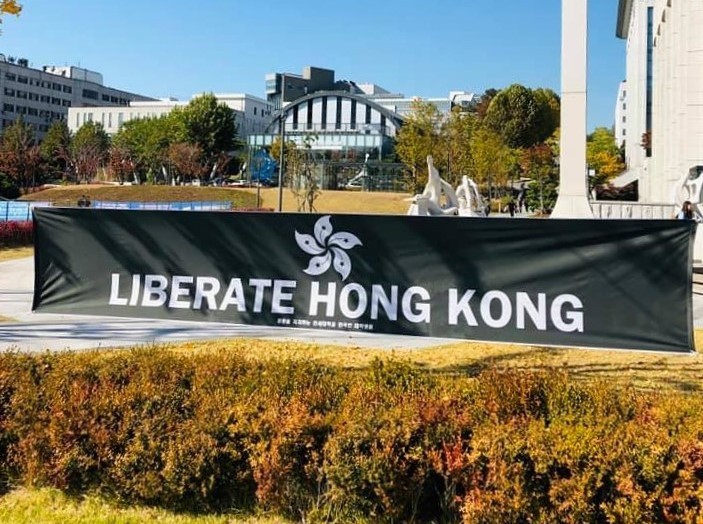 [1] Banners hung up at a university campus in Seoul by students to show support for the Hong Kong protests have been taken down twice in as many weeks.

[3] One of the students, who did not wish to reveal his name, said the group was currently checking the matter with the school.

[4] “The banners disappeared one by one starting at around 1:30 p.m. We are greatly angered that they were taken down in less than two hours,” the student said.

[5] This is the second time pro-Hong Kong banners have disappeared on the campus. On Oct. 25, the same banners were discovered to have been pulled down less than 24 hours after they were hung up at around 7 p.m. the previous day. The students said in a statement then that the school was not involved in the removal and that they believed a third party was behind it.

아이튠즈(아이폰): https://itunes.apple.com/kr/podcast/koliaheleoldeu-paskaeseuteu/id686406253?mt=2
팟빵 (안드로이드): http://www.podbbang.com/ch/6638
[1] South Korea’s soft power on the global stage has greatly improved over the past few years as a result of the global popularity of K-pop, K-food, K-beauty and Korean goods in general.

[2] To further enhance Korea’s status in the international community beyond Asia, Korea Foundation President Lee Geun said the country should form a presence among developed countries and develop a strategy to be perceived as “attractive.”

[3] “For South Korea to be acknowledged in Europe (and other Western countries) we need people with an international sensibility to be present at events that are important for the Europeans,” Lee said in an interview with The Korea Herald at the Korea Foundation’s office in central Seoul on Oct. 28.

[4] Lee, a professor of international relations at Seoul National University’s Graduate School of International Studies, was appointed as president of the nonprofit public diplomacy organization affiliated with the Ministry of Foreign Affairs in late September.

[5] Public diplomacy is “a mechanism for countries to achieve their goal,” according to Lee, which is practiced in multiple ways, such as maintaining friendly ties, exchanging thoughts and ideas, cultural exchanges and creating favorable public opinion.