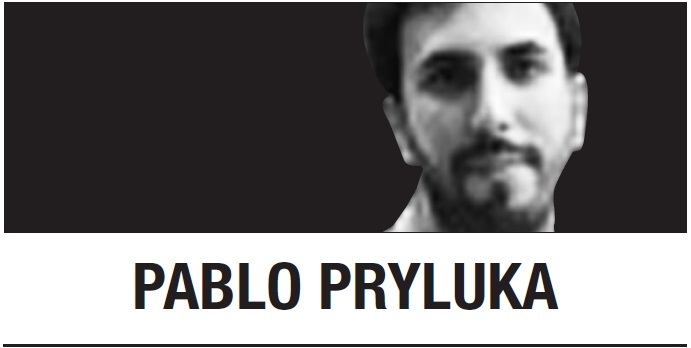 All over Latin America, public patience is wearing thin, with violence in Chile and the return to power of Peronists in Argentina. For almost 40 years, leaders and voters have struggled to realign economies with global markets, leavening the adjustment with social policies to protect the worst-off. Center-right and center-left coalitions agreed on broad strokes. While they argued over taxes and other issues, Latin Americans accepted the need for foreign markets and foreign investment.

For the past 10 years, however, world trade has slowed. The World Trade Organization predicts anemic growth of 3 percent at best. Trade wars, stalled treaties, and the return of economic nationalism pose a real threat to Latin Americans and others who depend on foreign markets. To make matters worse, income inequality has widened. Already the world’s most unfair region in this regard, Latin America had made some progress before 2015. But slower gross domestic product growth and stumbling social policies have since reversed the trend.

Latin American leaders across the political spectrum find themselves in a bind. As the world turned its back on globalization and open borders in favor of national and regional blocs, pro-globalization governments faced the yearnings of voters who took seriously the promise of economic rights and social well-being. At the same time, appeals to tradition, family and property have proved to be seductive for a growing part of the population, fueling support for Brazil’s Jair Bolsonaro, Peru’s Keiko Fujimori, or even Chile’s Jose Antonio Kast.

People are impatient and indignant. Argentina has been in an economic tailspin since 2017. Real wages have fallen. Poverty is up. Two years earlier, in 2015, Mauricio Macri won the presidency on his promise that fiscal adjustment and opening Argentina to the world would spur economic revival. Instead, they paved the way for his defeat. In a few short years, the package of pro-market reforms and economic opening seemed out of step with the rest of the world. Deglobalization, nativism, and protectionism set a new tone for politics, with frustration and uncertainty about the future overshadowing hope.

Frustration is even afflicting the region’s paragon of open-market politics, Chile. On Oct. 18, a wave of protests led President Sebastian Pinera’s government to rely on gendarmes, rubber bullets and tear gas to repress rioting and looting. During the ensuing week, the world watched images that seemed to contradict the stability of the “Chilean model.”

The riots and the bloody response of the army and the carabineros were followed by videos of Pinera, surrounded by men in fatigues, declaring that the country was “at war,” rhetoric that triggered memories of Augusto Pinochet’s 17-year military dictatorship. Despite Chile’s impressive economic growth and poverty reduction since the dictatorship’s end in 1990, inequality loomed large, and those who have yet to see the benefits have run out of patience.

Even progressive governments seem to have run out of time. A few weeks earlier, when Ecuador’s government announced a reduction in fuel subsidies, a wave of popular unrest forced the government of President Lenin Moreno to flee the capital, Quito. Heir to the center-left government of Rafael Correa, Moreno had turned to the International Monetary Fund and subscribed to a program of fiscal cuts. As in Chile, massive street demonstrations were met by severe repression. In the end, Moreno had to mothball the controversial policies to restore peace.

In some cases, malaise has led to paralysis. In Peru, the resignation of President Pedro Pablo Kuczynski in March 2018 only emboldened the populist forces of fujimorismo in Congress and prompted demonstrations denouncing the illegitimacy of Peruvian politicians. The shutdown of the Congress last month by the current president, Martin Vizcarra, casts doubt on the country’s future.

Then there are the shockwaves from Bolsonaro’s victory in Brazil’s presidential election last year, which brought an end to the country’s long-standing center-left consensus and ushered in a new regime of cronyism and incivility. With the IMF predicting economic growth this year of 0.8 percent, it’s hard to say how long Bolsonaro’s incendiary rhetoric will keep his supporters happy. Time might be running out for him, too.

Each country is going through its own drama. But what is clear across the region is that as the fabric of global integration comes undone, Latin American governments face spiking popular dissatisfaction and a sharp downturn in public confidence in governments and institutions. The result is an escalation of protest and repressive responses, turning modest demonstrations into massive conflicts.

So far, the outlier is Argentina, where the social unrest is being channeled through elections. It is worth recalling, however, that many who voted for the Peronists once voted for Macri’s free-market reforms. How long they will wait for Alberto Fernandez’s promises to bear fruit is unclear. While the new president is a wily pragmatist, even he knows that voters’ loyalties, especially when pressed to the limit of subsistence, are unstable.

Something fundamental has changed. Latin America cannot hitch its fortunes to the fading promises of globalization. Nor can it return to old-style populism. The only certainty is that the public’s fuse is short; many years of promises have dashed expectations at a time when the future looks especially bleak.

This is not the same kind of unrest seen in Beirut or Hong Kong, where people are taking to the streets to fight undemocratic regimes. This is about economic frustration, amplified by the seeming absence of alternatives to failed globalization. The risk, of course, is that governments resort to Chinese-style tactics and turn economic malaise into a struggle over the future of democracy. Pinera’s ominous talk of an internal war, while surrounded by uniformed military officers, does not bode well.