[Tyler Cowen] How can California be left in the dark? 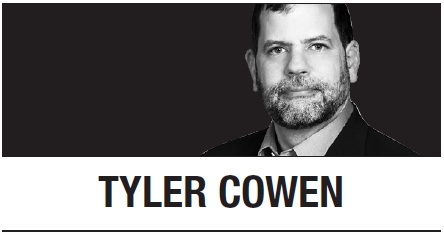 America continues to innovate wonderfully in cyberspace, but when it comes to solving actual, physical-world problems, its record is deteriorating. The fires in Northern California -- and the resulting power blackouts, affecting millions and running for days on end -- show just how many nodes of failure Americans are willing to tolerate or even encourage.

The practical and moral failings in this matter are so numerous it is hard to know where to start.

How about this: Systemic blackouts are commonly associated with nations such as Haiti or Pakistan, not the United States. Yet here is California, America’s biggest and probably most innovative economy, treating a blackout as some kind of unavoidable natural event. Why is this development not seen as an unacceptable outrage?

The No. 1 responsibility of a power company is to supply its users with power. So when the first-order response to a pending major problem is to cut the power for days, that is clear-cut evidence that the systems are badly designed.

High on the list of America’s failings would be its wanton disregard of climate change. True, it is difficult to pinpoint particular events as caused by climate change. It is entirely plausible, however, that climate change has made the fires more likely or more intense, due to the greater heat, dryness and wind.

Yet the US’ carbon emissions are increasing. Even when there are successes in the fight against climate change, such as fracking natural gas to replace coal emissions, the benefits to the climate are an afterthought for most people.

In other words: Parts of our natural environment are deteriorating around us, and we are responding passively and defensively rather than with a dynamic, can-do attitude.

Add American liability law to the list of culprits. Because of legal liability from past fire-related events, the share price of Pacific Gas and Electric, the public utility in California, has fallen from almost $50 to about $5 over the span of a year. It is therefore no surprise that the utility is afraid of further fires and will limit them simply by pulling the plug on everyone’s power connections.

Surely it is possible to design better regulation and better incentives for such an important supplier. Yet that problem has not risen to the top of the agenda.

Higher utility rates, to be used for financing capital improvements and maintenance, would be one obvious ameliorating policy change, and indeed Australia has used such policies to limit brushfires. But no, in California the Office of Ratepayer Advocates, within the California Public Utilities Commission, generally has pushed for low rates and lower capital expenditures. California voters, meanwhile, are hardly screaming for higher utility rates to help pay for a more secure power system. Instead they prefer to ban plastic straws.

Economists themselves have been of no great help. My Twitter feed includes plenty of the world’s greatest -- or at least best-known -- economists. They love to debate Elizabeth Warren’s plan for a wealth tax, an idea that probably isn’t going to happen, just ask Mitch McConnell or, for that matter, any moderate Democratic senator. When it comes to designing a better incentive model for California power utilities -- a concrete problem for which economics is remarkably well-suited -- there has been close to complete silence.

Economists are just reflecting a more general failing in American political debate. The old saying that all politics is local has been turned on its head: All issues are now national in scope and partisan in nature. People are less interested in the day-to-day mechanics of actual governance, including at the state and local level. The comeuppance for those ideological obsessions is now upon us.

Another possible problem is how difficult it is in California to cut down trees. Some experts have suggested that making tree thinning easier could alleviate fires. While that is not the major issue at hand, neither are other second- and third-tier issues being treated with much urgency. For example, the PG&E website has been crashing periodically, making it harder for customers to learn when blackouts might be hitting their areas.

Finally, there is the news media’s response to these problems. On Sunday, the New York Times published a story with the headline, “Up to 2.7 Million Face Utility Shutting Power as California Fires Rage.” It was on Page 25 of the print edition. Granted, it received more prominence online, as does other coverage elsewhere. But this should be a No. 2 or No. 3 story, as Hurricane Katrina was for several weeks.

California has long been a bellwether for the country. Therefore, its inability to address problems with the physical environment is cause for concern. Is America really doomed to a future of complete incompetence?