[Anniversary Special] From Sony to Samsung, how tech leadership migrated from Japan to Korea

It’s a stark change from the years between 1979 -- when the first Sony Walkman was officially launched -- and 2007 when the first iPhone was released, and 2009 when Samsung announced its first Galaxy smartphone. It is no exaggeration that Japan’s tech companies such as Sony, Panasonic, Sharp and Toshiba once ruled the world. 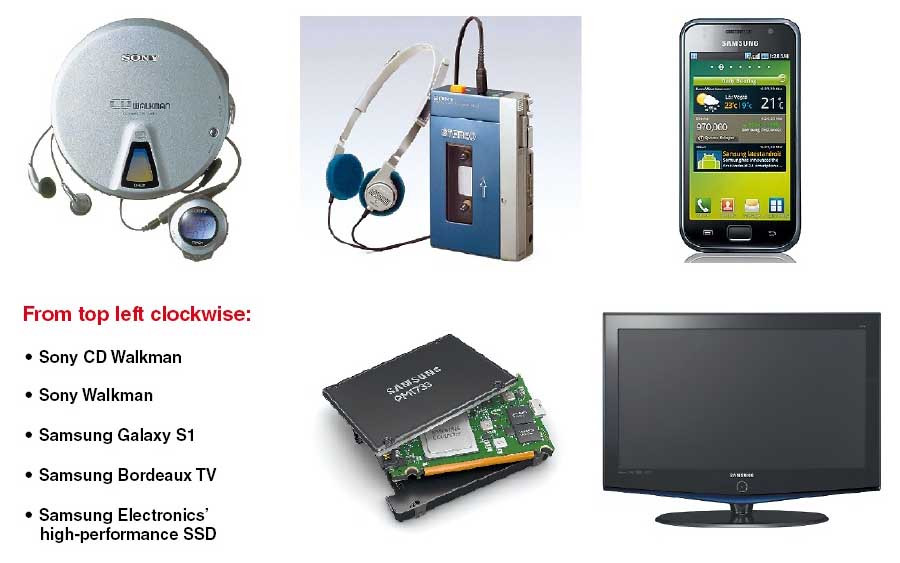 However, as the world’s electronic industry entered the digital transition era in the 2000s, Japan’s technological leadership started to wane and was overtaken by digital device makers like Samsung and Apple.

It’s not that Sony didn’t prepare for the mobile device market.

In partnership with mobile carrier Ericsson, it launched a smartphone brand Sony Ericsson in 2001. The joint venture introduced a range of feature phones until 2007 and claimed about 9 percent of the mobile phone market.
A year after Apple’s iPhone debut, Sony launched its first Windows-based smartphone Xperia X1 in 2008. In the smartphone sector, Sony was a year earlier than Samsung.

It fully acquired the JV with Ericsson in 2011 with an aim to solidify its position as the world’s No.3 smartphone vendor after Samsung and Apple.

But the Japanese firm’s high-priced smartphones that were viewed as being less innovative in terms of user experience than Samsung’s or Apple’s couldn’t help retain its long-time reputation in the mobile device market.

In the TV market, Japan’s Sharp was chased hard by Samsung and another Korean TV maker LG Electronics since mid-2000.

Even though Sharp was the world’s first to manufacturer color TVs in 1960 and LCD TVs in 1987, it couldn’t maintain its reputation in the large-size LCD TV market.

While Samsung and LG were focusing their investments on self-supplying large-size LCD panels, Sharp narrowly bet on small LCDs.

Due to the timing, Samsung rose to the top spot in the global TV market in 2006 for the first time, beating out Sharp, and has kept the position until now.

After suffering losses for years, Sharp was sold to Taiwan-based Foxconn Technology Group in 2016.

Japan’s semiconductor companies such as Toshiba, Hitachi, NEC and Fujitsu had also led the global chip industry with over 50 percent market share until the late 1980s.

Samsung was behind Toshiba with around 12 percent market share until 1990.

Most of the Japanese chipmakers faced financial difficulties during the 1997 downturn in the silicon cycle.

However, latecomer Samsung didn’t stop investing in new memory products like NAND during the slow season. The Korean tech giant snatched the top spot in the NAND market in 2002.

And it remains as an unrivalled provider of both DRAM and NAND.

As a result, Korea overtook Japan in the overall electronics market in terms of annual production value as it ranked third after China and the US in 2018, according to a report by Korea Electronics Association.

Korea produced a total of $171.1 billion worth electronic products, while accounting for 8.8 percent globally. China and the US produced $717.3 billion and $245.4 billion each.

Japan came in fourth after Korea with $119.4 billion in value in the same year.

Korea, in particular, beat Japan in the production value of consumer electronics, components, radio and telecom devices and computers, according to the report.