The shells are supremely thin on the outside, folding at the slightest bit of pressure and melting away on the tongue, while the ganache fillings are nuanced, fragrant and oftentimes complex.

These bite-sized desserts represent Ko’s desire to experiment with flavors and to continue a sweet-toothed culinary journey that started eight years ago, when he opened Piaf, a chocolate shop, in 2011.

“I have always been fond of macarons,” said Ko, 39, of why he expanded his repertoire to include these popular French treats.

Ko was able to share his penchant for these meringue-based morsels when Macaron Couture opened in early July in Seoul’s Sinsa-dong, a stone’s throw away from Piaf.

A ganache, according to Ko, features a chocolate base that is paired with other ingredients.

“We make the ganache very runny,” said Ko, breaking down the process behind his uber-soft, uber-flavorful macarons.

Ko then deliberately makes his meringue-based macaron shells “dry and hard” to maximize absorption of the flavors and aromas of the emulsion-like ganache.

To fully achieve that “migration of moisture and flavor” from the ganache filling to the shells, the macarons are aged in a controlled environment for two days.

This approach shines through in macarons like Ko’s yuja variation, which features a ganache crafted from three different varieties of chocolate and locally sourced yuja -- citron.

Yuja juice and zest goes into the ganache, which then infuses the shells with its chocolaty and citrusy flavors for a treat that is incredibly fresh tasting and rich.

A blend of locally sourced chestnut honey and Spanish lavender honey is strategically placed in the center of the macaron, while one of the macaron shells is infused with squid ink for a slightly salty umami pop of flavor.

When fused together into a single bite, creamy and meltingly soft textures, a slight kick of pungent cheese, the lingering sweetness of the honey and the nutty and umami shell come together.

There are also more straightforward macarons like Ko’s coconut variation.

Coconut puree goes into the white chocolate ganache filling while desiccated coconut is ground into a powder and added to the meringue base for the shells.

The resulting treat is incredibly nutty and bursting with the unmistakable flavor of coconuts.

Ko has many more flavor combinations in the works, including plans to draw inspiration from traditional Korean desserts and their ingredients.

At the moment, Macaron Couture specializes in a total of 15 flavors, which have been painstakingly displayed with tags that detail the degree of sweetness, acidity and chocolaty flavor each one possesses.

“Our concept is upscale, tailored and creative,” said Ko. 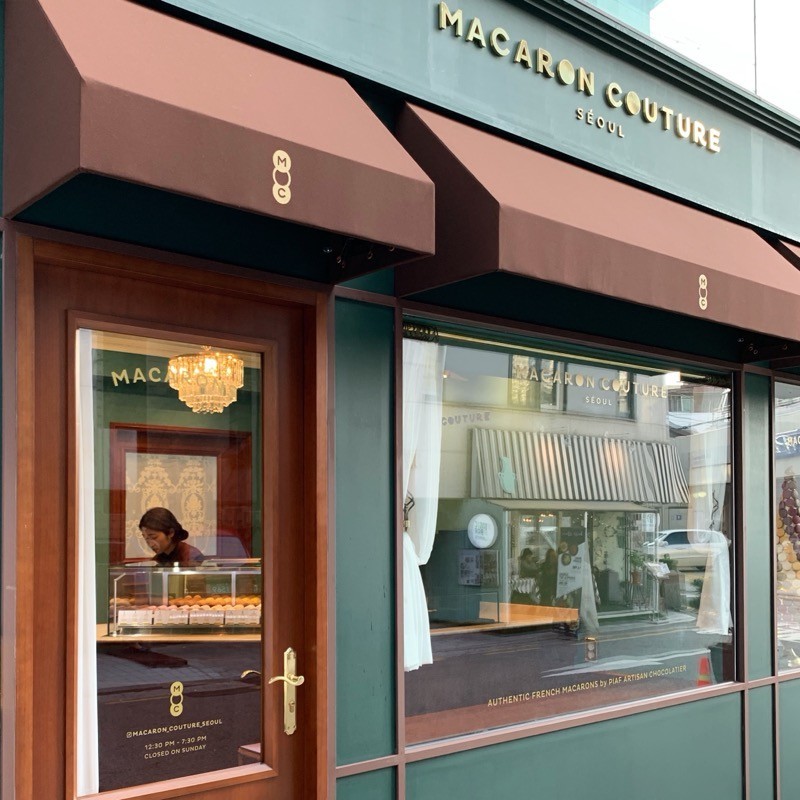