On the 74th anniversary of the Hiroshima and Nagasaki bombings, a ceremony in South Gyeongsang Province remembered the tens of thousands of Koreans who lost their lives in the foreign cities after being taken there against their will.

Over 200,000 people were killed by the two atomic bombs that were dropped Aug. 6 and 9, respectively, in 1945. Most of the victims were Japanese civilians, but some of the dead and injured were Koreans who had been drafted for forced labor and other forms of exploitation.

Some 400 Korean survivors and their families attended the memorial held Tuesday morning at a shelter for the survivors of atomic bombings in Hapcheon, joined by Minister of Health and Welfare Park Neung-hoo and South Gyeongsang Province Gov. Kim Kyung-soo, among others.


Hapcheon became known as “Korea’s Hiroshima” after hundreds of the bombing victims settled there. Over half of the registered Korean survivors live in the Gyeongsang provinces, having migrated back after the end of World War II.

In his address, Park promised “continuous and systematic support” for the Korean survivors of the nuclear attacks.

“Japan threatened peace in Asia as well as the rest of the world by provoking a war, which ended only after an atomic weapon was used,” he said.

“Today we remember the victims, heal the pain and the memories, and pave the way for future peace.”

An initiative for atomic bombing survivors, launched in July 2017, extends support to the victims’ descendants, provides assistance for their health and financial security and executes memorial projects.

An August 2018 survey of 2,283 survivors by a government research institute showed survivors and their children were more prone to physical and mental illnesses and financial difficulties than average.

The Welfare Ministry has promised support tailored to the needs highlighted in the surveys.

The ministry spends about 5 billion won ($4.1 million) a year on victim assistance, which includes medical expenses of 100,000 won per month, copayments not covered by the National Health Insurance, 350,000 won a year for health examinations and 1.5 million won for funeral costs.

Junko Ichiba, who helms a Japanese civic support group for Korean atomic bomb survivors, said in a condolatory address, “The Japanese government insists they have resolved the issue of reparations for Korean victims. Not once did they offer official condolences to the victims and their families.”

“Prime Minister Abe stood on the ground of Hiroshima this morning and never spoke a word about the Korean victims. It is as if the Japanese government is trying to erase Korean victims.”

On Oct. 3 last year, former Japanese Prime Minister Yukio Hatoyama visited Hapcheon and apologized to the survivors, becoming the first high-ranking official -- though not while in office -- from Japan to pay respects at the memorial hall. 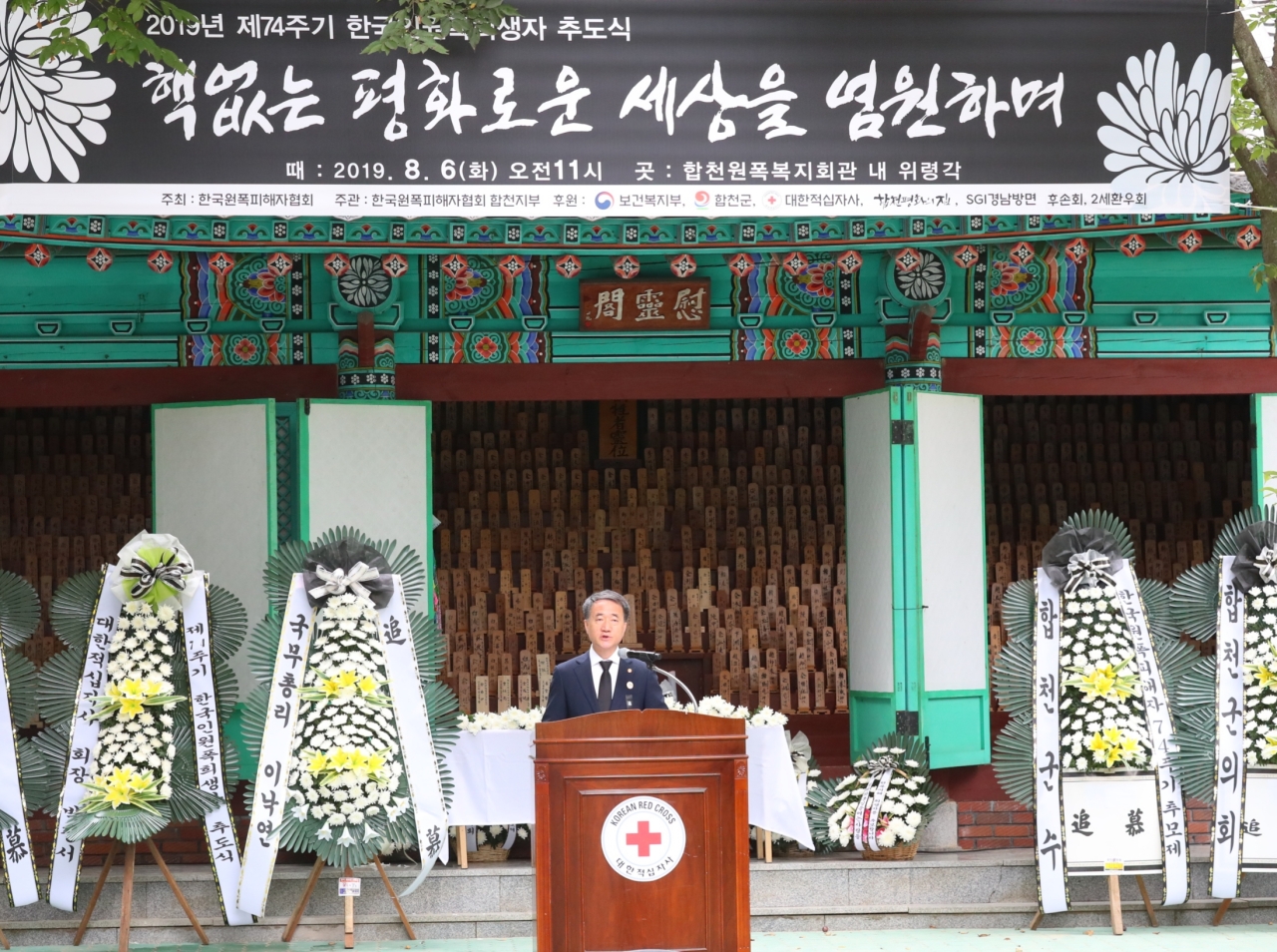 "Today we pave way for future peace," Park said in an address. (Ministry of Health and Welfare)
By Kim Arin (arin@heraldcorp.com)