[Trudy Rubin] A free press can never be taken for granted 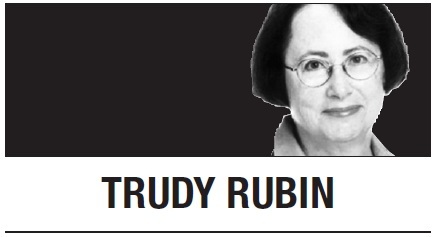 Earlier this month, President Trump addressed a group of so-called “digital leaders” invited to a social media summit at the White House.

The guests included far right social media activists linked to white nationalists who spew out racist and anti-Muslim messages. They included individuals who produce fake videos, use hoaxes to smear Democratic candidates, and disseminate dangerous conspiracy theories. Only at the last minute was the welcome mat withdrawn from cartoonist Ben Garrison, known for blatantly anti-Semitic drawings -- after CNN revealed he was invited.

“The crap you think of,” Trump said to the group, “is unbelievable.” He meant this as a compliment. This from a president who constantly denounces fact-based media as “fake news.”

You need only look at this White House “summit” to understand why real news, produced by independent, fact-based media, is so essential right now.

We are living at a time when social media already blurs the line between fact and fiction. Without a press that speaks “truth to power,” demagogues can sell their falsehoods unhindered.

“Our liberty depends on freedom of the press,” Thomas Jefferson famously said. Yet media freedom has been deteriorating in recent years not only in places you’d expect, such as China and Russia, but also in some of the world’s most influential democracies.

And President Trump’s constant denunciation of the “mainstream media” is taking its toll here.

“Democracies in general are undergoing a decline in political rights and civil liberties,” according to Freedom House’s 2019 Freedom in the World report. This organization tracks benchmarks of freedom around the world each year.

“It has become painfully apparent that a free press can never be taken for granted, even when democratic rule has been in place for decades,” the report states. The decline of global press freedom is closely related to the broader decline of democracy over the past 13 years, and the rise of populism in Europe, Asia and here.

In authoritarian countries journalists are killed or jailed, or silenced with physical threats, or thrown in jail for criticizing their leaders (see Turkey) or murdered for exposing drug cartels when their democratic government can’t protect them (see Mexico).

But populist leaders in wavering democracies use other means to curb the free press. Even among 16 countries considered wholly “free,” Freedom House says 19 percent “have endured a reduction in their press freedom scores over the past five years.”

Freedom House examples are sobering: In Hungary and Serbia, illiberal leaders have consolidated media ownership in the hands of their cronies. In Austria, the leader of the far-right Freedom Party, until recently part of the governing coalition, tried to collude with Russians to purchase the largest national newspaper and control its coverage. And in weaker European democracies such as Slovakia and Malta, journalists who tried to track corruption to top leaders were murdered.

And then there’s India, the world’s largest democracy and formerly home to an incredibly vibrant press culture, where the ruling, populist-nationalist Bharatiya Janata Party now attacks critical journalism as “anti-national” and where “government-aligned thugs have raided critical journalists’ homes and offices.”

A not insignificant part of the problem is America’s role -- as beacon of the free press -- has been tarnished. Indeed, Trump’s mantra of “fake news” has been adopted abroad by several illiberal leaders in backsliding democracies such as Poland and the Philippines to intimidate their own journalists.

Which brings us to the impact of Trump’s determined demonization of the fact-based press.

From the time he announced his candidacy in 2016 through his second year in office, Trump pushed out 1,339 tweets about the media that were critical, insinuating, condemning, or threatening, according to the Committee to Protect Journalists’ US press freedom tracker. At every opportunity, he hammers mainstream media, and certain named journalists, as “fake” and “enemies of the people.”

“The constant vilification of such outlets by President Trump, in an already polarized media environment, is accelerating the breakdown of public confidence in journalism as a legitimate, fact-based check on government power,” writes Freedom House President Mike Abramowitz in a new report, “Freedom and the Media 2019: A Downward Spiral.”

While previous US presidents have criticized the press, sometimes bitterly, none have done it “with such relentless hostility for the institution itself.” Trump has indirectly encouraged violence against the media, even accusing them of treasonous intent.

And, of course, by inviting social media fraudsters and extremists to the White House, Trump elevates them to a par with honest journalists.

“A free press which holds powerful people accountable is truly essential to the functioning of a democracy” says Abramowitz, rightly. This is a topic I intend to return to in future columns. Those who care about US democracy need to think now about how to protect press freedoms and how to support independent media in doing their job.