The city authorities have also fallen behind in increasing housing supply for citizens.

The central government has bolstered rules on mortgages under the guise of curbing apartment prices in the city. The ceiling of bank loans for housing purchases has sharply been lowered as part of a set of anti-property speculation measures.
And it has increased apartment supply in satellite cites in Gyeonggi Province by designating several areas as locations for a third phase of new towns.

Officials argued that these policies would have the effect of stabilizing heated housing prices in Seoul. The policies came after prices of apartments in some districts, including Gangnam, soared by 50 percent or more between 2016 and 2018.

All the while, since Moon took office in May 2017, the benchmark interest rate has stayed under 2 percent.

While some commenters online had said that housing prices would eventually plunge under state-led anti-speculation measures, some had predicted a bounce back after several monthlong periods of adjustment.

Seoul apartment prices have already begun to rebound, less than a year since the Moon administration unveiled its eighth round of policies to stabilize the real estate market on Sept. 13.

Prices of apartments in Seoul climbed for a second consecutive week, according to the Korea Appraisal Board.

An apartment unit of 60 square meters in Hannam-dong in central Seoul’s Yongsan recently traded at 807 million won ($687,000), which exceeds the former record of 740 million won for the same size unit.

An apartment of 96 square meters in the Mapo district sold at 1.1 billion won, breaking the former high of 900 million won.

The climb in apartment prices, initiated in Gangnam and Seocho wards, has spread to Mapo, Yongsan and Seongdong. Other districts in the capital show symptoms of rebound by halting the decline of the first half.

Data from the KAB showed that apartment prices rose in 14 out of the 25 wards in Seoul during the second week of July.

A university professor was quoted by an economic news daily as saying that “consumers have already known that the government policies would bring about shortage of supply, and thus, housing prices will grow further in the coming years.”

The Land Ministry has hinted at adopting a apartment-price “ceiling” per unit area of floor space in Seoul, when builders in the private sector initially sell to households via housing subscription system.

While some officials claim the regulatory ceiling -- as a fresh anti-speculation action -- would block a further hike in apartment prices, analysts and online commenters remain skeptical. 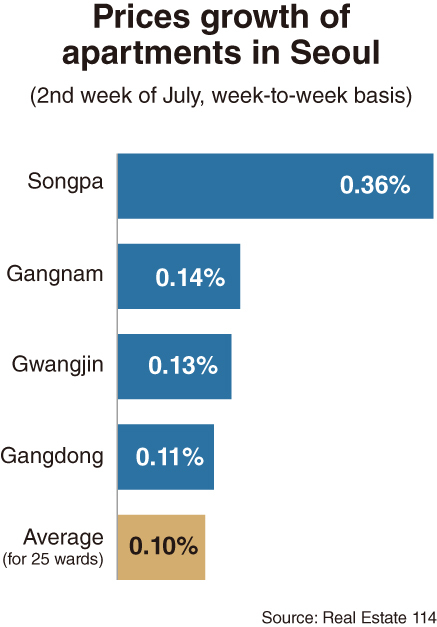 “The upper ceiling restricted by the government would cause more shortage in supply as constructors would hesitate to build apartments,” said a research analyst in Yeouido.

He said the property market should also be dependent upon market principles -- not by artificial measures -- like other consumer goods.

“The curbing of apartment prices would be possible through levying heavier taxes on multiple-home owners; raising key interest rates; and increasing the supply in proportion to the demand,” said the analyst.

A real estate agent in Seoul said the interest rate, under 2 percent, is something that homeowners with mortgages still appear to be willing to tolerate. “In addition, they are pinning their hopes on a potential future policy that might reinvigorate the economy amid low GDP growth rates.”

The evidence indicates that there is little reason for homeowners to rush sales by lowering their asking prices -- regardless of whether they own a single property or multiple properties.

As for new towns, fostered in satellite cities, many agree that the new residential cities have brought the effect of reducing the population of Seoul and spiraling property prices.

But some of the cities have been stigmatized as “bed towns” that lack self-sufficiency. A commenter said, “Amid continuous creation of bed towns in Gyeonggi Province (surrounding Seoul), apartments in Seoul will continue to lay golden eggs.”