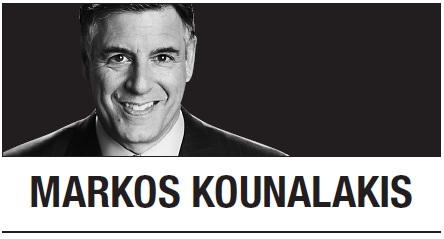 If the truth can set you free, then the British ambassador to Washington is now free as a bird. Unfortunately for him, he will no longer be soaring over America’s capital or hovering anywhere near the White House. In fact, the president made sure this British goose got cooked.

Discretion is a key component of diplomacy, and Ambassador Kim Darroch was publicly discreet to a fault. But his private, privileged and personal observations -- reserved for his ministry and his masters -- now seem indiscreet because they were publicly leaked. Darroch this week resigned his Washington posting.

From Wikileaks to these recent leaks, timed and targeted news bombshells are blowing up traditional diplomatic relationships as well as politics as usual. Add indiscretion, incendiary responses, hyperventilating social media and a dash of bravado, and you have the makings of a massive diplomatic disruption between allies who for years have enjoyed a “special relationship.” It is not pretty.

Sizing up President Donald Trump for his superiors, Darroch told London that the White House was “dysfunctional,” “unpredictable,” “clumsy and inept.” The president’s response was to diss his boss, Prime Minister Theresa May, and do a little bit of Twitter-trolling replete with sophomoric shaming and name-calling, saying the ambassador was a “pompous fool” and “a very stupid guy.”

An ambassador must tell it like it is. That’s his professional responsibility. At the same time, America’s disparaged and humiliated president has every right to throw the bum out. He can berate him, disinvite him and even declare him persona non grata.

The one thing Trump can’t do is change the underlying fact that Darroch speaks for many ambassadors who share his assessment. I know. I’ve been privileged to hear similar harsh reviews from others senior diplomats. I’m not naming names, but Darroch’s diplomatic colleagues are astute and accurate observers of their host nation, travel in similar circles, and generally maintain a shared and educated view of Washington. Unlike Darroch, their positions are safe unless their cables also go public.

Ambassadors are only as good as they are frank. The prime minister’s spokesman said that ambassadors are meant to provide “honest, unvarnished assessments.” Their job is to deliver a clear, carefully worded analysis of how they see the country to which they are posted. In the case of British Ambassador Sir Darroch, he was serving his nation both ably and admirably by giving his unfettered assessment of America’s status, inclination and leadership (Disclosure: I was a guest at his residence in 2018). Leaks can sink even the most effective diplomats and politicians -- here and abroad.

In 2014, U.S. Assistant Secretary of State Victoria Nuland’s communications were hacked and her critical remarks made public. Nuland was frustrated with a European Union that pussyfooted around the Ukraine crisis. Her phone call was punctuated with “F_k the EU!” Russia is suspected releasing that phone conversation, a Vladimir Putin-approved dirty tricks aimed sowing discord between America and Europe. Putin also got to undermine his nemesis Nuland, who was forced to apologize to Europeans.

In the 2016 US election, Wikileaks’ hacked and stolen emails proved dangerous because they showed us that our most private conversations, cables and calls can be front-page news and throw both a presidential campaign and diplomatic relations off-balance. The result is disastrous for conducting the state’s business globally, where publicly diplomatic language is key, a whisper is considered a roar and discretion is demanded.

Wikileaks let America’s adversaries and allies see how America’s diplomats saw them. It was a shocking look at what America’s diplomats do, how they think and what they report. Today, however, the belief that privileged conversations and cables can remain secret and inaccessible to only a few possessing security clearances is a throwback to the pre-Wikileak world.

The rarified world of foreign envoys once guaranteed them a means to communicate securely via unopenable diplomatic “pouches,” for example. These pouches and the information contained within were considered sovereign and privileged and could travel unhindered between nations. While there are examples of these pouches being breached, it was the exception and not the rule. Diplomatic correspondence was once limited to physical notes and letters, often under waxed seal. That, too, is mostly a throwback to a bygone era. Communications between diplomats and home offices now are digitized and encrypted, but widely vulnerable and targeted for interception for blackmail or mass distribution to a more judgmental and unintended public audience.

President Trump is naturally suspect of email and digital electronic communications. He once said that the safest way to communicate is by bike messenger. “No computer is safe,” he said, adding, “It’s very important, if you have something really important, write it out and have it delivered by courier.”

If bicycles could fly like birds over a wide ocean, Darroch would certainly have sent his comments via bike messenger.