Trekking across backbone of Korean Peninsula


The Korean Peninsula is a land where myriad of mountain ridges decorate its bumpy surface. In ancient times, this presented a challenge to agricultural communities, but it also provided natural barricades.

Today, the country’s mountains are a place to enjoy hiking, a sanctuary from hectic city life and a source of beautiful scenery.

The Korea Herald recently visited three mountains within driving distance of Seoul -- Bukhansan, Seoraksan and Chiaksan -- to see what they had to offer in collaboration with the “Drone and Phone” series produced by DJ Clark of China Daily.

Videos and stories from the series can be found at https://www.droneandphone.com.

This is the first in a two-part series.

Located just north of Seoul and accessible from several entry points in the city, Bukhansan is the easiest for Seoul dwellers to get to among “real mountains” in South Korea -- that is, mountains that require actual sweat and effort to climb. The name “Bukhansan” means “mountain north of the Han River,” and it spans from Gangbuk-gu in northern Seoul to Deogyang-gu in Goyang, Gyeonggi Province.

Those who want less sweat and a more leisurely walk can opt for the Dulle-gil, a 71.5-kilometer low-altitude hiking/walking path around the mountain. A map and information can be found at http://www.knps.or.kr/portal/dulegil/bukhansan/eng/index.do.

We took the Ui-dong course, which starts near the entrance to the temple Doseonsa, then continues past Harujae Hill, Baegunsanjang Cabin and the gate Wimun before finishing at Baegundae. One could also walk along the Mangyeongdae Terrace (799.5 meters), which used to be the toughest and most dangerous route, but now has a walking deck.

The entrance was near Bukhansan Ui Station on the Ui LRT Line, part of the Seoul subway system, which is almost always jam-packed with hikers on weekends and commuters on weekdays. If you’re driving, finding a parking lot that charges 2,000-10,000 won ($1.60-$8.40) is the most viable option.

Once you are there, signposts will guide you toward the entrance to Doseonsa, which is worth a visit if you are interested in a cultural experience.

The hike itself could take three to five hours, depending on your physical condition and how often you take breaks. It is not the steepest mountain in Korea, but there are definitely some uphill moments.

Be sure to pack extra layers, as it gets windier and chillier the higher you go. Wearing short sleeves will be fine as long as you’re moving and generating heat, but it will get pretty cold on the way down and at the top, where you will no doubt want to pause for a photo.

Do not wear casual sneakers, as they will not provide the necessary traction to climb the rocky terrain at Baegundae, which also doesn’t have a lot of shade, so hats are recommended.

The climb to the top

The hike was surprisingly moderate for most of the course. The wooden stairs and walking decks installed at some of the tougher courses made things even easier.

During the hike, we had to stop and look around to take in the beautiful sight of the city. On a sunny spring day, we were glad to have packed plenty of water, but not so glad that I dressed casual.

Baegunsanjang Cabin is the point where the hike went from casual to challenging. This is where they sold snacks and ice water, and is usually packed with visitors. We powered on to Wimun, and on toward the top.

Wimun is one of over a dozen gates of the fortress Bukhansanseong, which was built during the Joseon Dynasty (1392-1910). During that time, Seoul referred only to what is now known as central Seoul, and the fortress was built around the city’s perimeter to defend against foreign invasion. The gate was actually more of a secret path for Joseon soldiers to use during battles, not as impressive as one of the fortress’s main gates, Daeseo-mun.

The tiny gate now guards the path toward the mountaintop.

Crossing its threshold, the peak was in sight. The climb got considerably steeper, and I couldn’t have been happier to find a rope installed along the rocky path for climbers to hold onto. Once you have a firm grip on the rope, it is not that difficult to climb. But one should be careful, as a slip can lead to a long fall, or a sprained ankle at least.

By the time we arrived, the sun was peeking from behind the clouds. The view from the top was spectacular, with the clear skies allowing us to glance at the metropolis below us on one side and the mountain ridges in the distance on the other. 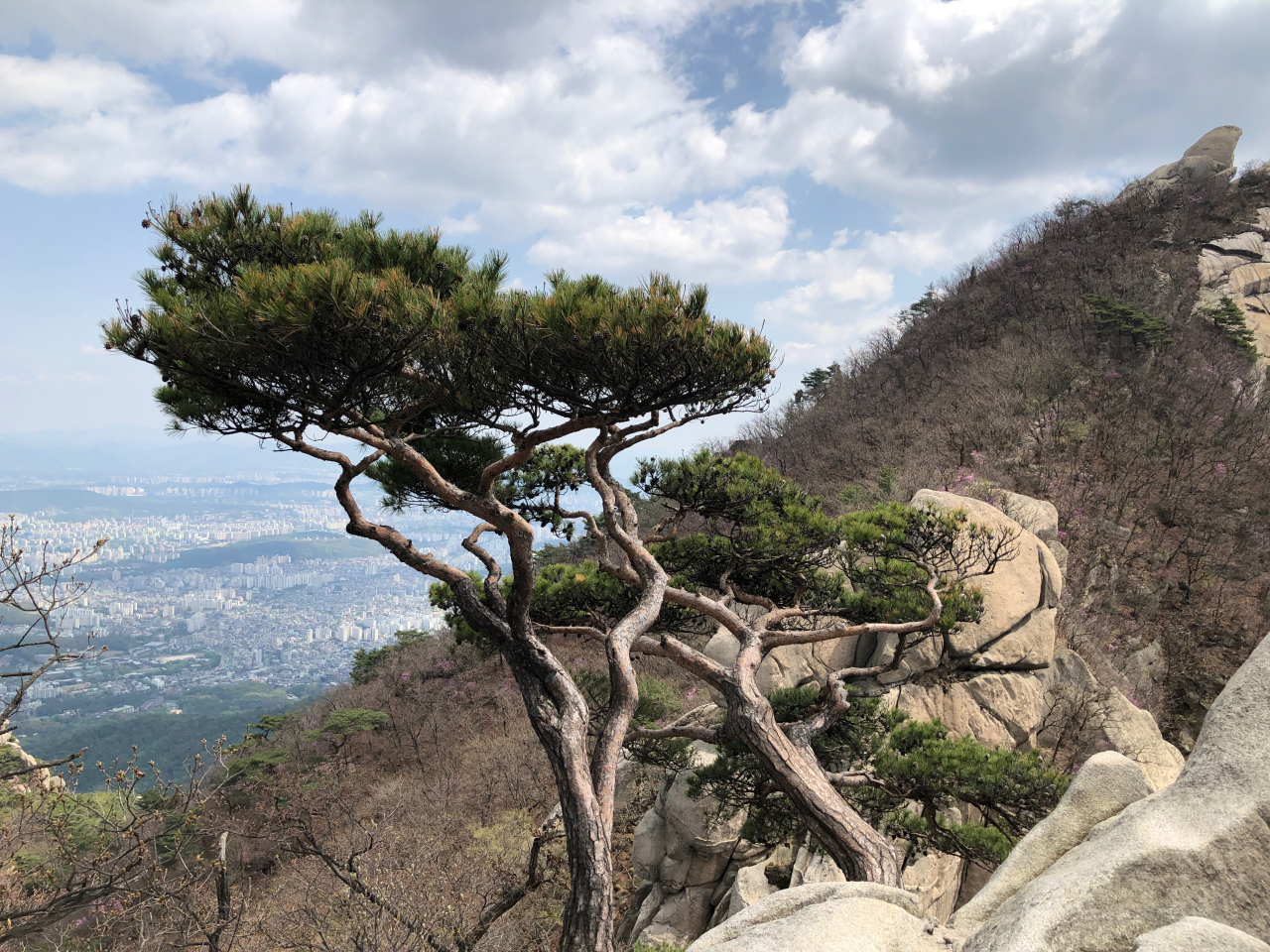 To sit upon the great rock -- beautiful scenery as far as the eye could see and a cool breeze blowing away the beads of sweat on our foreheads -- was a feeling like no other. It was a pleasant reminder of why so many Koreans enjoy hiking, and of the many natural wonders the peninsula has to offer.