A day earlier, US media outlets reported that US President Donald Trump is set to delay his decision on whether to impose tariffs on imported cars and car parts. As for Korea, Bloomberg initially reported the nation would be exempted, though it withdrew this hours later.

The final decision is set to be made in November.

In February, the US Commerce of Department sent a report to Trump on whether imported cars threaten national security under Section 232 of the Trade Expansion Act. Upon receiving the report, Trump was set to make a final decision in 90 days, by May 18.

If the US imposes an up to 25 percent tariff on imported cars, this would result in 3 trillion won of losses to Korea’s auto industry. Last year, Korea exported cars and car parts amounting to 16 trillion won to the US.

US financial firm Moody’s said auto tariffs would hinder economic momentum in Korea and decrease the nation’s growth by 0.3 percentage points this year. 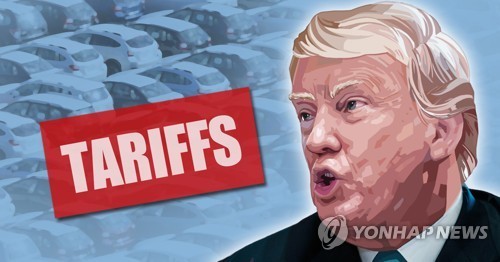 The Korean government has continued to reach out to the US to ask that the nation be exempted from the tariffs. This week, Trade Minister Yoo Myung-hee met with US Commerce Secretary Wilbur Ross and White House economic adviser Larry Kudlow to deliver the nation’s request that the Korean auto industry be exempted.