Michelin-starred chef back with another casual dining spot

Over a year has passed since Yim branched off from his multi-starred namesake restaurant with Pyunghwaok, and the chef is generating buzz again with Jungsik Cafe.

Situated in the same building as his Michelin-starred restaurant Jungsik, Jungsik Cafe opened in April, replacing its predecessor, Jungsik Bar.

“We wanted to use the space during the day,” said Jungsik Cafe head chef Kim Young-il, 28, explaining why the bar had been converted into an all-day cafe with a “rustic and comfortable vibe.”

The new space sports a rough-hewn, outdoorsy aesthetic with plenty of warm wood accents and a greenhouse-like space in the back.

There is also a slightly elevated nook in the front where the baked goods are on mouthwatering display.

Aside from the 120,000 won ounce of caviar, most of the eats and baked goods on the menu do not go over 22,000 won and orders are taken at the counter.

Given the pricing and the DIY ordering process, Jungsik Cafe clearly leans toward fast-casual -- a restaurant concept aiming to serve good-quality food at lower prices by eliminating or reducing the full-service element of dining -- though Yim’s approach may be more accurately categorized as upscale casual dining.

Of the many eats on the menu, one of the standouts is Jungsik Cafe’s 9,000 won plate of housemade bacon.

More than a centimeter thick and served up as two slices totaling 120 to 150 grams, Jungsik Cafe’s bacon does not resemble the thin, commercially available slices that many are accustomed to or may expect when ordering a plate of bacon.

“Our bacon is made by being cured for a week with salt and maple syrup,” Kim explained. The cured pork is then smoked and seasoned with whole peppercorns, fennel seeds and coriander seeds.

Sprinkled with salt flakes before being served, the bacon is unctuous and fragrant. There is a slight slick of sweetness around the crisp edges from the maple syrup, while the center is juicy and rich.

According to Kim, owner-chef Yim wants the cafe to focus on housemade eats like bacon, including gravlax, which will be added to the menu soon.

“We will be curing the salmon for about three days,” Kim elaborated, adding that the gravlax will be seasoned with orange and lemon zest and dill.

Other eats include salad, pasta and sandwiches, including a toothsome ham and pesto panini.

As befits an eatery with a from-scratch attitude, the panini is made with sesame campagne that has been baked in-house.

That same bread is also available for sale, sporting a thin, crackly crust, a soft crumb and a crunchy scattering of black sesame, white sesame and sunflower seeds throughout.

For the panini, the bread is buttered, layered with housemade basil pesto, smoked pork loin ham, Comte cheese and rucola.

That pressed sandwich is paired with a small heap of mini cos lettuce and cherry tomatoes seasoned with a vibrant lemon dressing.

While cooked-to-order eats comprise a large slice of Jungsik Cafe’s repertoire, baked goods also take up a sizable chunk of the menu.

In addition to sesame campagne, there are piquant Cheongyang pepper baguettes and an incredibly aromatic potato ciabatta.

“We bake the ciabatta at 260 degrees Celsius so it smells just like roasted potatoes,” said Son.

True to its name, it tastes like creamed corn.

White chocolate amps up the rich sweetness of the mousse, while a soft sponge cake layer on the bottom adds duality of texture. Crunchy bits of candied hazelnut and pecan praline round out the dessert. 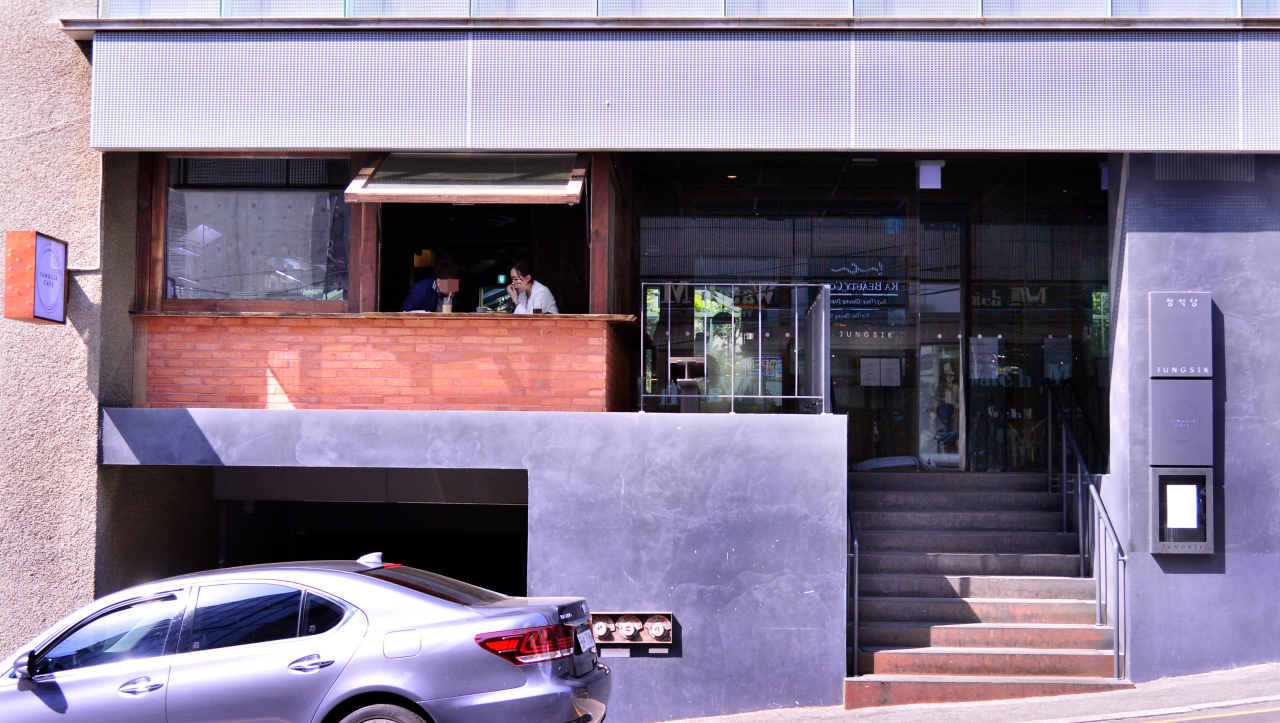