According to local corporate tracker CEO Score, Samsung Electronics retained the No. 1 spot and Hyundai Motor No. 2. Meanwhile, Posco came in at No. 3, bumping LG Electronics down to No. 4.

At the same time, chipmaker SK hynix and oil refiner GS Caltex became new entrants to the top 10, buoyed by record-high profit growth last year. SK hynix climbed up five places to No. 8, while GS Caltex moved up three notches to No. 9. 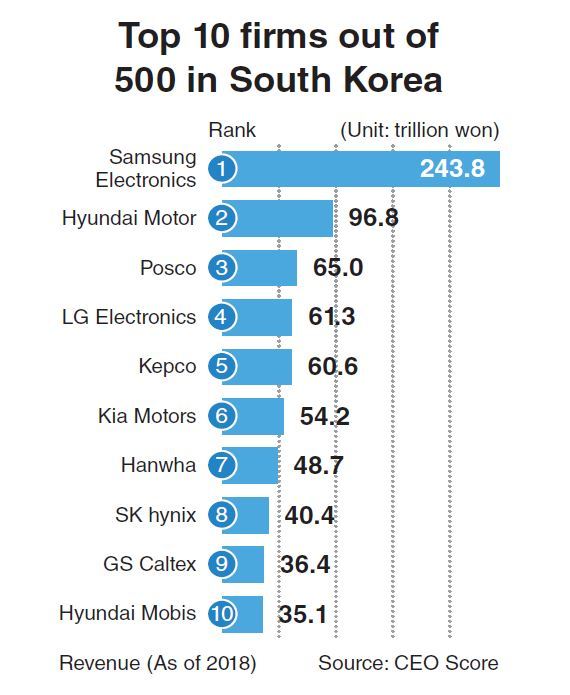 By industry, a majority of the companies on the top 500 list were from the petrochemicals sector (49 companies). Retail had the next biggest presence (47 companies), followed by automobiles and parts (46 companies), construction and materials (43 companies), insurance (33 companies) and technology and electronics (32 companies).

Among the 38 new entrants to the top 500 list, the highest-ranked company was Hyosung T&C -- which was spun off into an independent unit from Hyosung Corp. last year -- in 163rd place.

The company in 500th place on last year’s list of top 500 companies was Farm Story Hannaeng, which posted 921.6 billion won in revenue last year, according to CEO Score.